WATCH: Shark bites Florida man and will not let go 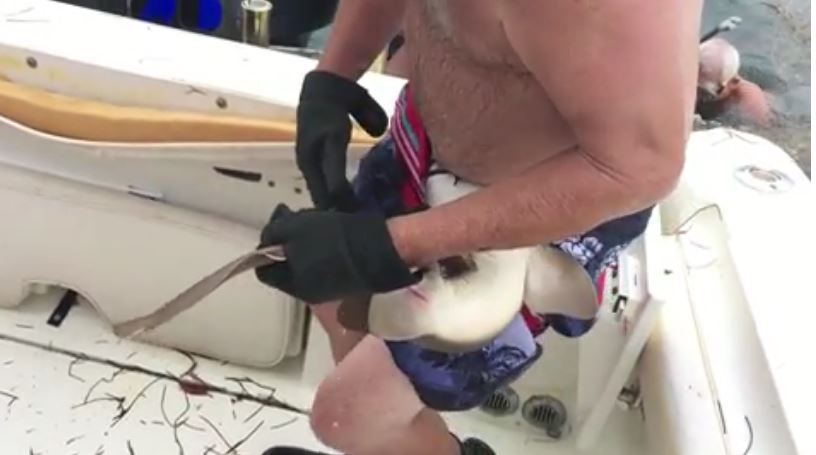 A remarkable video has emerged from Florida of a man battling to remove a nurse shark from his body after being bitten.

The footage, captured on September 2 off the coast of Marathon city, Wisconsin, shows Ervin Maccarty stepping onto his boat with the shark hanging off his abdomen.


"He didn't get your penis, did he?" asks one onlooker at the beginning of the video.

"Don't cut me!" says Maccarty in the video as his friend approaches with a knife. "Don't bleed him out on me!"

Once removed, the crew members try to place the shark in water to revive it.

Maccarty later explained what happened online: ''I was taking lunch break on boat while another six people were in the water retrieving lobsters. One of them came up for air and says he shot a grouper with a spear gun and that the grouper was stuck in the hole."

''I am good at getting groupers out of holes so the captain of the boat asked me to go in and get the grouper.''

''I jumped in and went straight to the hole in about ten feet water. As soon as I get down there the shark came out of another hole and bite me. I struggled getting back to the boat,'' he added.

In a later conversation with Newsflare, he said: "(The shark) hit me hard. It knocked the breath out of me so I had to get up for air but I felt the shark biting and trying to tear me open.

"It wouldn't let go so I had to hold it tight with both hands so it wouldn't rip me open and I had to get up for air with the shark pulling me down.

"I thought I would drown. I got up and saw the boat had floated away and everyone yelling that the shark had bit me.

"No one knew it was still on me. I had to get to the boat with no hands to swim with. It was a struggle and wore me out. I eventually got to boat. The video tells the rest."

WATCH: Little girl trapped in escalator by her hair

WATCH: Sea turtle gets tangled in load of cocaine