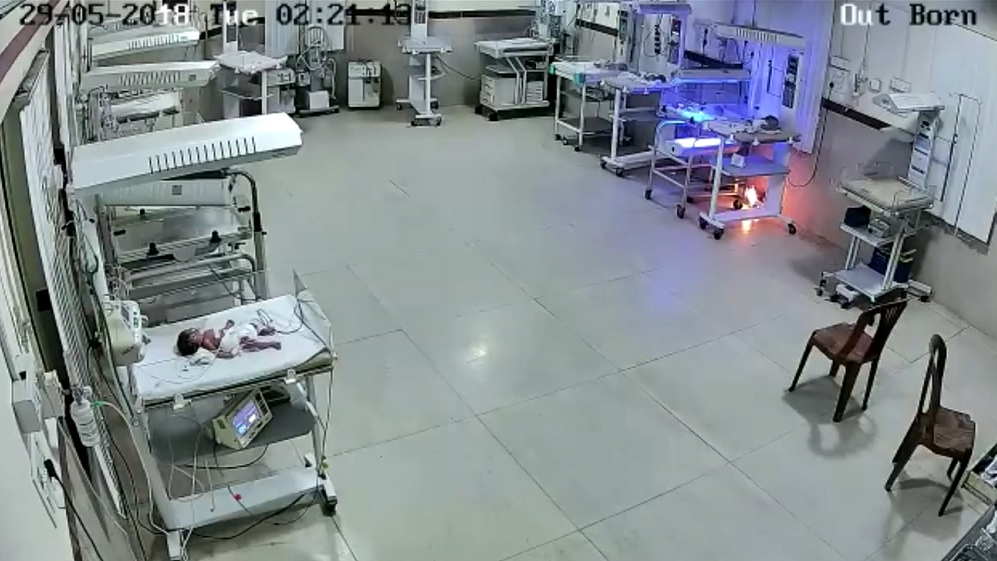 This is the moment an intensive care unit in India with 23 newborns caught fire in the dead of the night.

But a nurse barges in in the nick of the time to avert a major tragedy.

The heart-stopping incident occurred in Gwalior city in the central Indian state of Madhya Pradesh in the early hours of May 29.

A phototherapy machine at the Sick New Born Care Unit (SNCU) in the District Government Hospital caught fire due to short circuit.

The defective unit that started burning even had a child undergoing treatment on its stand.

CCTV footage from the unit shows the machine catching fire and flames leaping high in a room with 23 babies.

But luckily a nurse on duty - Renu Rajput - smelt the smoke and rushed in. She turned off the machine and checked on the baby on the machine.

She then rushed out to turn off the main switch and returned to put out the flames with a fire extinguisher.

Other staff at the hospital also joined her and the babies were quickly moved to safety.

A doctor at the hospital said: "It's a miracle that the babies escaped unhurt. The blaze had slowed down a bit on its own by the time the nurse rushed in," he added.

Requesting anonymity, he added that the wiring at the SNCU was faulty. "We have complained several times in writing to the hospital administration," he pointed out.

27 children die in India after school bus plunges into gorge