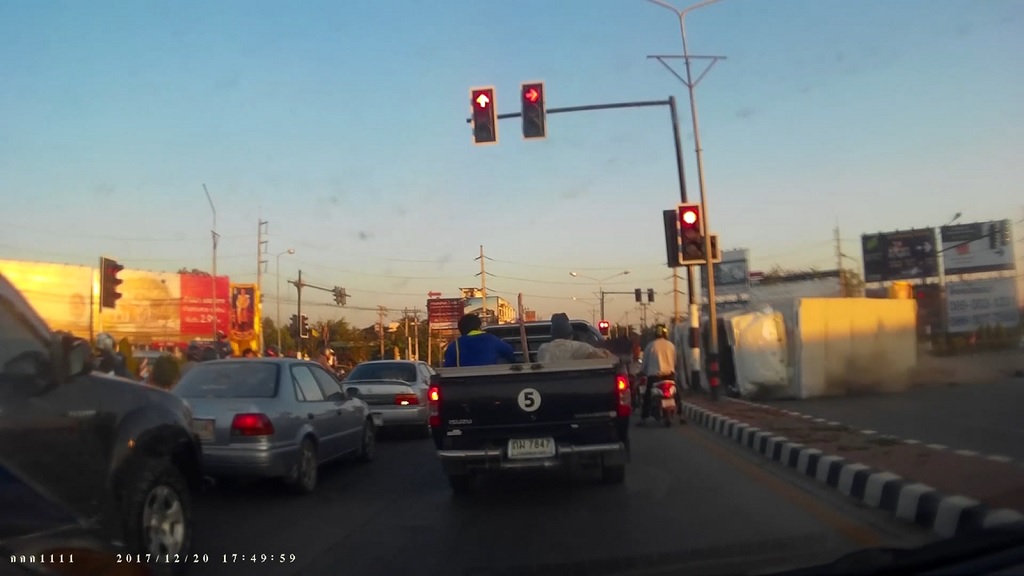 This is the terrifying moment an out-of-control lorry skids across the road on its side before crashing into traffic lights - which fall onto waiting cars.

The six-wheel cargo truck was travelling at more than 60mph when it toppled over approaching an intersection in Chiang Mai, Thailand, on Thursday evening during rush hour.

Waiting motorists leapt for cover when they noticed the lorry come hurtling towards them. It then ploughed into the traffic lights sending the plunging down onto cars.

One female moped rider was hit by the metal pole but was not seriously injured while others came within inches of the bing hit by wreckage in the San Kamphaeng district of the city.

The driver was taken to hospital with serious injuries but is now said to be in a stable condition.

Motorist Nady Niboontham was in the queue of traffic with his young son and wife Parnsiri who is heard screaming as the lorry comes crashing towards them at 5.50pm.

Nady, who recorded the accident on his HD dash cam, said: ''I was driving home with my wife and son. There was a six-wheel truck driving at high speed. It skidded over and rolled across the roads' lanes.

''The truck collided with the traffic lights which collapsed onto the cars. The cars were damaged but none of the drivers there were injured, they were all safe.

''The lorry driver was wounded because he hit the police. He was not it a good condition but he was taken to hospital.

''It was scary but also very lucky that there was a footpath partition in the road, or it would have hit us and the others.''