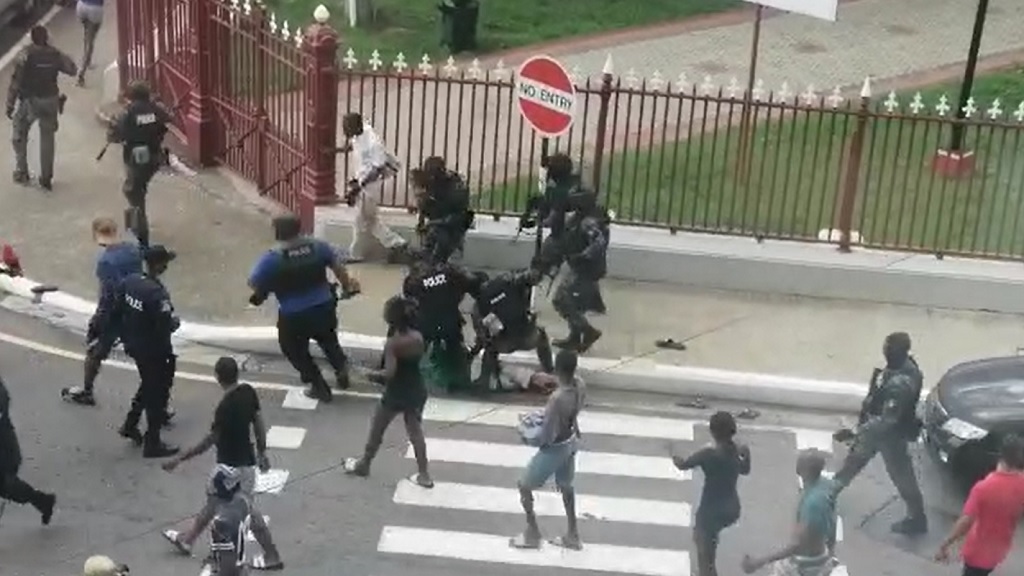 Traffic gridlock has been reported across the country as burning debris and skirmishes were reported between various groups and the Trinidad and Tobago Police Service (TTPS).

The TTPS has since raised its alert level to red, with reports of shots being exchanged in various locations within the capital.

The National Security Ministry has urged the public to remain calm and drivers are urged to avoid entering Port of Spain at this time.

Police received reports of debris being set on fire along the Beetham Highway on Tuesday morning.

There were additional reports of debris being placed along roadways in various parts of Port of Spain including Piccadilly Street, Observatory Street, the Eastern Main Road, Laventille, and others. However, the TTPS later reported that roadways into the capital had been cleared.

Subsequent footage showed debris being set alight along Bagatelle Road, Diego Martin, and Maloney. Attempts were made to place debris along the roadway near Cocorite, however officers visited the scene and neutralised the incident.

Intermittent showers of rain in the west and northwest of Trinidad have dampened these conflagrations to some extent, however up to 1.00 pm officers were still attempting to quell several incidents.

Reports have been received of drivers heading into Port of Spain being advised to turn around.

Drivers are urged to avoid heading into the capital at this time.

Drivers were delayed after burning debris was strewn across the Beetham Highway on Tuesday.

From initial information, the incident took place around 8.40 am.

Police received information that several people at Beetham Gardens were seen running onto the east-bound lane of the highway with tires and rubbish.

The group then placed the items onto the middle of the roadway and set them on fire.

They reportedly began chanting ‘We want justice’ at the scene.

The police were immediately notified and two officers from the Emergency Response Patrol Unit responded within minutes.

The individuals escaped into the Beetham community and the two officers remained until additional units arrived at the scene.

The incident, however, resulted in heavy traffic on both the eastbound and westbound lanes.

A team of officers from the Port of Spain Division led by Snr Sup Moore were at the scene up to 10 am Tuesday.

Reports have come in of burning debris at other locations in and around the capital, including Observatory Street, Lady Young Road, the Eastern Main Road and Picadilly Street, among others.

Reports have been received of drivers heading into Port of Spain being advised to turn around.

Drivers are urged to avoid heading into the capital at this time.