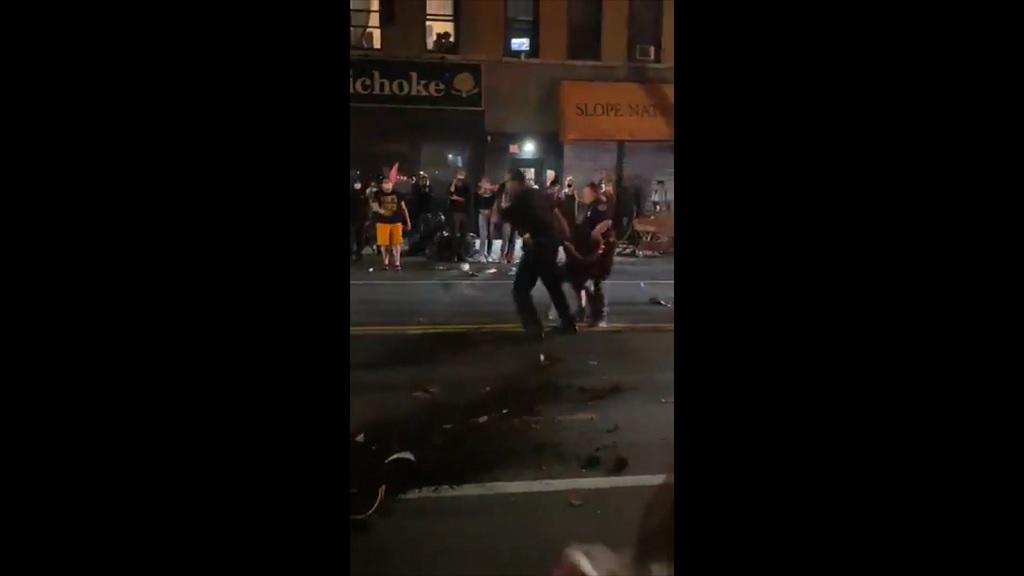 A Trinidadian caught in protests in New York City over the death of George Floyd shared videos online showing skirmishes between protesters and officers.

Speaking to Loop News, the man, whose identity has been kept anonymous for safety reasons, said he was in Brooklyn during protests on May 29 and saw several confrontations.

He said however that overall it was a positive experience as he supports the protests against police brutality and systemic racism.

“My experience, overall was positive, it was good to be a part of such a large, diverse group of people coming together for this cause.”

The man said he was in downtown Brooklyn close to the Barclays Centre where many people had gathered with placards, around 8.00 pm.

The protesters had gathered in front of a precinct where they took their stand, and things began to escalate.

“I didn’t even really get to the centre of the group because it was a lot of people and police were directing people to stay in various sections, some streets were blocked off etc so I didn’t get to the heart of it but I wasn’t too far away.”

However he said he was there for quite some time, until around 1.00 am the next day, and the protests were largely peaceful in nature with the exception of a few confrontations.

“There were definitely a few confrontations, as in you would just see cops descending onto one area. This would happen whenever police tried to tell people to stay on the sidewalk for instance, or telling them to maintain order.”

He added that in some instances protests are being made to look more violent than they actually are.

“Some people are making these protests more violent. For example, someone put a pile of bricks close by so it’s accessible. I’ve seen undercover cops who began smashing windows so that it would look like it’s the protesters. That’s how they want to portray it in the media.”

In one situation a group of officers quelled a protester, pushing him into the ground.

“I couldn’t really tell what was happening, all I saw was a group of cops descending on one area, and that’s usually because it’s a confrontation between a cop and a protester.”

“Because they see cops attacking a protester, others began reacting.”

He said he also noted looting and trees on fire in parts of Manhattan.

“I saw things going on in Manhattan, things were getting serious, places were being looted, glass being broken and trees on fire in the street. I’ve never seen it like that before.”

He said he has not visited Trinidad and Tobago in about a decade but he believes that there is racism at home as well, and it should also be addressed.

He said he does know a few others from Trinidad and Tobago in the US who are also joining the movement.

“I’m happy that people are united against police brutality and specifically brutality against black people. I’m really happy that we’ve taken a stand because…it’s just blatant and it’s not warranted. There have been innocent lives lost. And it’s not new it’s just that now, it’s being recorded.”

Protests have spread across the US and the UK in response to the death of George Floyd, who died after an incident in which an officer pressed his knee on his neck while he was lying on the ground.

Video footage of the incident was shared online, inciting outrage from the public.

Derek Chauvin, the officer seen kneeling on Floyd's neck for nearly nine minutes, was charged on Friday with third-degree murder.

Watch: Calls in Paris for protest over Floyd, Traore