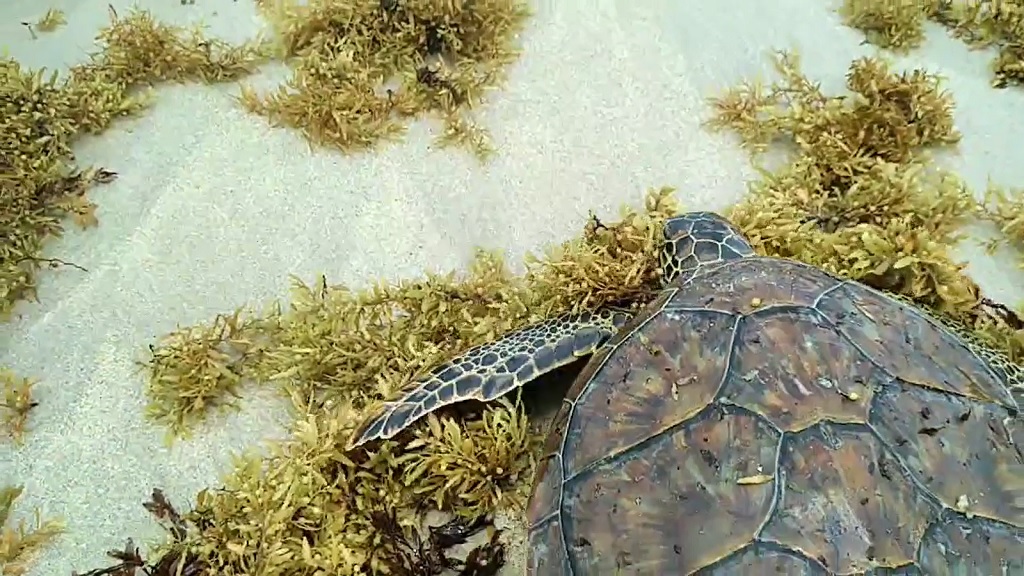 Turtles visiting Trinidad's shores to nest are once again struggling against an influx of sargassum seaweed, however due to the COVID-19 regulations, there is no one to help them.

Turtle conservation group Nature Seekers shared videos of the sargassum earlier this month, which they said is now an annual occurrence, and showed one turtle struggling to make its way back to shore amid piles of seaweed.

The deposits which were shown in early April have subsided but the group said more seaweed will come.

The group told Loop News that due to the current regulations which prohibit gathering, it is not feasible to carry out a beach clean-up at this time.

"As you may be aware, the sargassum influx to the region is one that now occurs every year. Some years worst than others and this year is no different."

"At present, the quantum has subsided however as history shows, there will be a few more waves to be deposited before the season is over."

The conditions of these beaches mean turtles may have to struggle even more to make it to nesting grounds. Some may not make it at all.

"Depending on the amount washed in at a given time, it can be rather detrimental in that turtles are unable to access the beach."

"The ones who would have been lucky to nest before the influx, the hatchlings if hatched will have difficulty in emerging from the nest."

"Unfortunately the number of persons needed to manually clean the beach will certainly go against all public health measures."

An article shared to the Ecological Society of America says that seaweed could be detrimental to turtle nesting: "The direct consequences of sargassum accumulation on beaches may be a detriment to nesting sea turtles and their offspring in some areas."

According to another report in the Cayman Compass, hatchlings may get trapped in mounds of seaweed and die before reaching the ocean.

Trinidad and Tobago one of the largest Leatherback turtle nesting sites in the world - approximately 20,000 nests are laid each year on our islands' shores.

Leatherback nesting season occurs from March 1 to August 31 each year.

The Leatherback is an endangered species and is listed as an Environmentally Sensitive Species. Four other turtle species are protected by law: the Olive Ridley, Loggerhead, Hawskbill and Green Turtle.