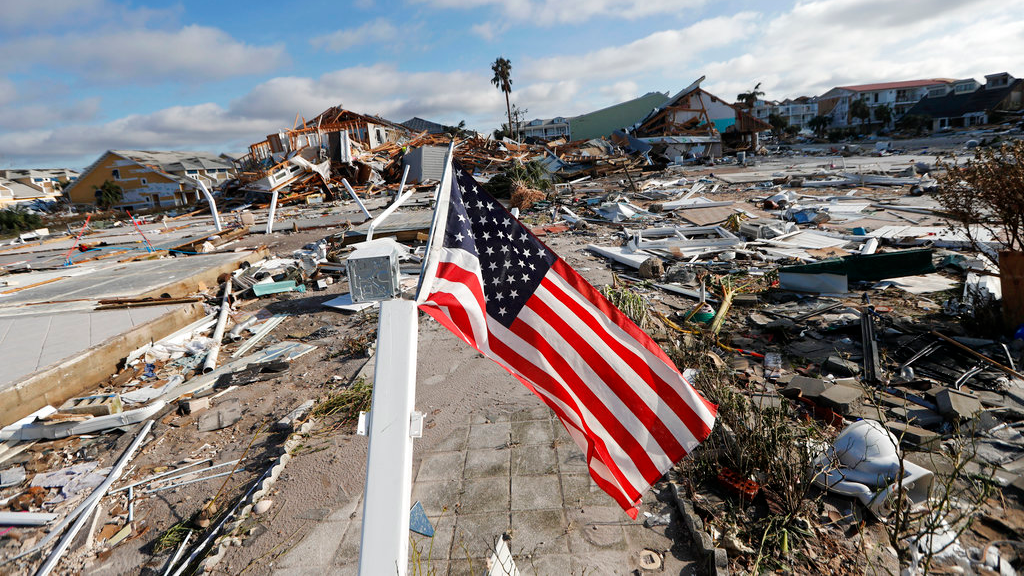 The devastation inflicted by Hurricane Michael came into focus Thursday with rows upon rows of homes found smashed to pieces, as search-and-rescue crews made their way into the stricken areas in hopes of accounting for hundreds of people who defied evacuation orders.

At least two deaths were blamed on Michael, the most powerful hurricane to hit the continental U.S. in over 50 years, and it wasn't done yet: Though weakened into a tropical storm, it continued to bring heavy rain and blustery winds to the Southeast as it pushed inland, soaking areas still recovering from Hurricane Florence.

The full extent of the damage was only slowly becoming clear, with some of the hardest-hit areas difficult to reach because of roads blocked by debris or water. An 80-mile stretch of Interstate 10, the main east-west route along the Panhandle, was closed.

Some of the worst damage was in Mexico Beach, where Michael crashed ashore Wednesday as a Category 4 monster with 155 mph (250 kph) winds and a storm surge of 9 feet (2.7 meters). Video from a drone Thursday revealed widespread devastation across the town of about 1,000 people.

Entire blocks of homes near the beach were obliterated, reduced to nothing but concrete slabs in the sand. Rows and rows of other homes were turned into piles of splintered lumber or were crumpled and slumped at odd angles. Entire roofs were torn away and dropped onto a road. Boats were tossed ashore like toys.

A National Guard team got into Mexico Beach and found 20 survivors overnight, and more crews were pushing into the area in the morning, with the fate of many residents unknown, authorities said. State officials said 285 people in Mexico Beach had refused to leave ahead of the hurricane despite a mandatory evacuation order.

Mishelle McPherson and her ex-husband searched for the elderly mother of a friend. The woman lived in a small cinderblock house about 150 yards from the Gulf and thought she would be OK.

Her home was reduced to crumbled cinderblocks and pieces of floor tile.

"Aggy! Aggy!" McPherson yelled. The only sound that came back was the echo from the half-demolished building and the pounding of the surf.

"Do you think her body would be here? Do you think it would have floated away?" she asked.

As she walked down the street, McPherson pointed out pieces of what had been the woman's house: "That's the blade from her ceiling fan. That's her floor tile."

The beach town was difficult to reach by land, with roads covered by fallen trees, power lines and other debris. The governor pleaded with people in the hard-hit areas to stay away for now.

"I know you just want to go home. You want to check on things, and begin the recovery process," Scott said. But "we have to make sure things are safe."

Over 900,000 homes and businesses in Florida, Alabama, Georgia and the Carolinas were without power.

The Coast Guard said it rescued at least 27 people before and after the hurricane came ashore, mostly from homes along the Florida coastline, and searched for more victims.

Among those brought to safety were nine people rescued by helicopter from a bathroom of their Panama City home after their roof collapsed, Petty Officer 3rd Class Ronald Hodges said.

The hurricane damaged hospitals and nursing homes in the Panama City area, and officials worked to evacuate hundreds of patients. The damage at Bay Medical Sacred Heart included blown-out windows, a cracked exterior wall and a roof collapse in a maintenance building. No patients were hurt, the hospital said.

The state mental hospital in Chattahoochee, which has a section for the criminally insane, was cut off by land, and food and supplies were being flown in, authorities said.

Forecasters said it could drop up to 7 inches (18 centimeters) of rain over the Carolinas and Virginia before pushing out to sea Thursday night.

In North Carolina, still struggling to recover after Florence, up to 6 inches of rain had fallen in the mountains by morning, and people had to be rescued from cars trapped in high water.

"For North Carolina, Michael isn't as bad as Florence, but it adds unwelcome insult to injury, so we must be on alert," Gov. Roy Cooper said.

Authorities said a falling tree killed a man outside Tallahassee, Florida, and an 11-year-old girl in Georgia was killed when the winds picked up a carport and dropped it on her home. One of the carport's legs punctured the roof and hit her in the head.

An Associated Press team drove for miles and encountered extensive destruction around Panama City. Though most homes were still standing, no property was left undamaged.

Hundreds of cars had broken windows. Twisted street signs lay on the ground. Pine trees were stripped and snapped off about 20 feet high.

More than 375,000 people up and down the Gulf Coast were ordered or urged to clear out as Michael closed in. But it moved fast and intensified quickly, and emergency authorities lamented that many people ignored the warnings.

Based on its internal barometric pressure, Michael was the third most powerful hurricane to hit the U.S. mainland, behind the unnamed Labor Day storm of 1935 and Camille in 1969. Based on wind speed, it was the fourth-strongest, behind the Labor Day storm (184 mph, or 296 kph), Camille and Andrew in 1992.

Carolinas next in line for TS Michael's fury