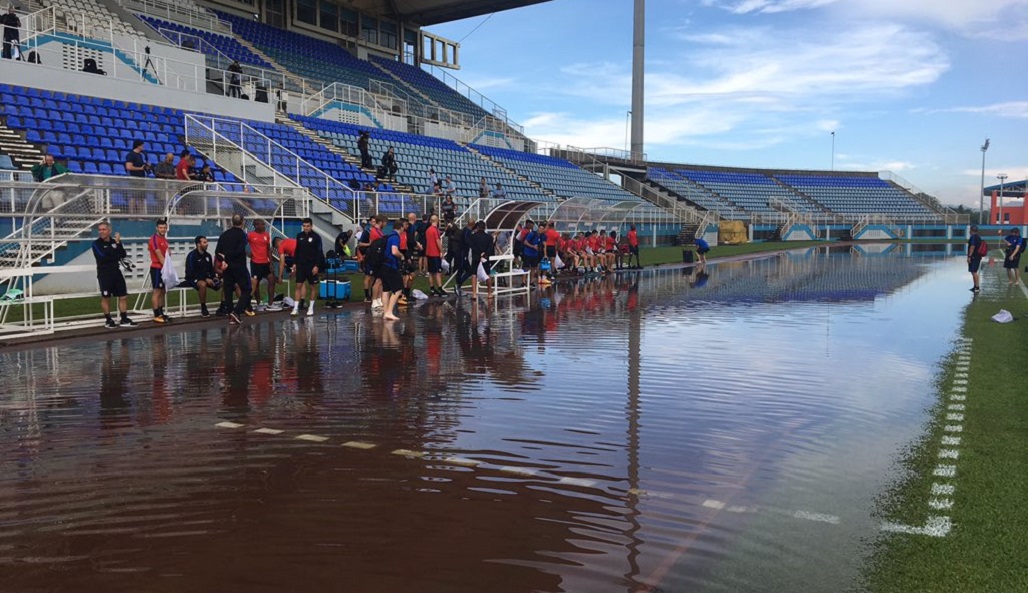 It was a wet start for the US football team, who arrived in Trinidad and Tobago earlier this week and attempted to practice at the Ato Boldon Stadium, only to find a pool of water barring them from practice.

The team shared a series of Twitter posts on Monday showing a flooded area, forcing the players to 'piggyback' in order to cross over.

"The #USMNT encounters a river around the field as it turns up for its official training session at Ato Boldon Stadium this morning," said the US Soccer's official Twitter account.

"#R̶o̶a̶d̶T̶o̶R̶u̶s̶s̶i̶a̶ #RiverToRussia" the team Tweeted, to the mortification of some Trinis.

Video footage showed the players being carried over the water in order to carry out their training practice for the match tomorrow night.

ESPN sports journalist Jeffrey Carlisle shared photos via Twitter showing parts of the field which were covered with water. 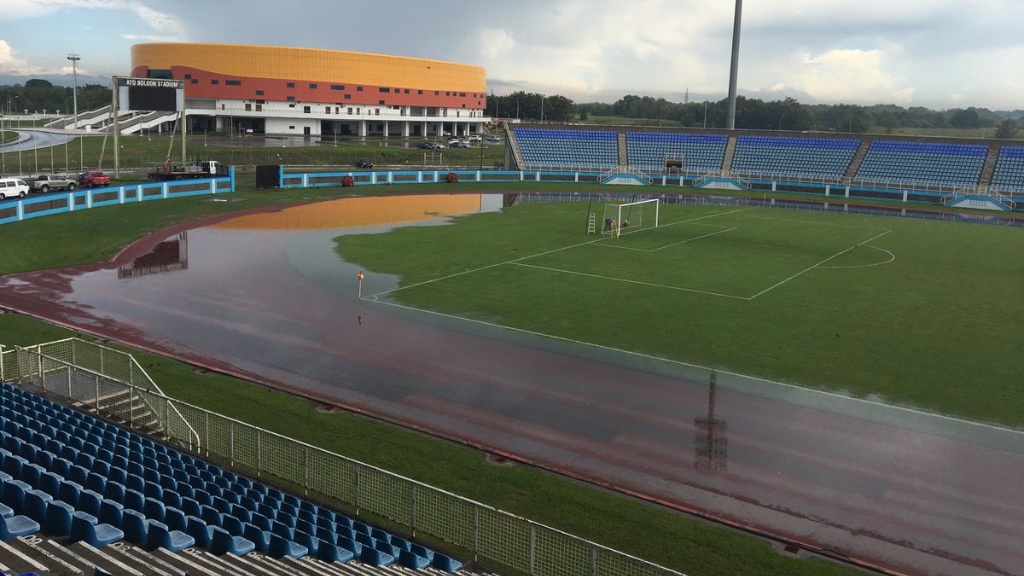 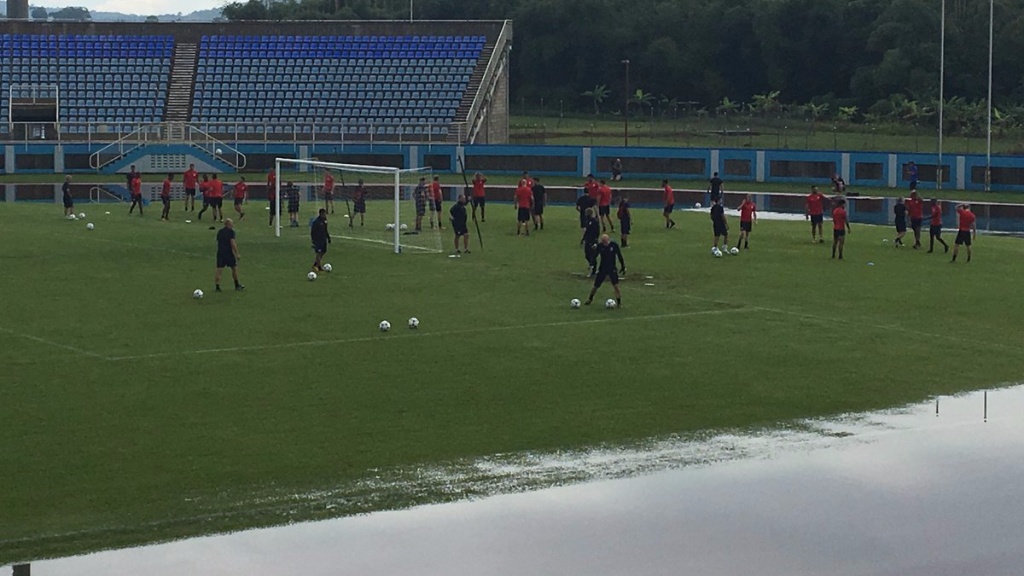 (Photo: ESPN Journalist Jeffrey Carlisle showed US players practising behind the goal post "so the field doesn't get torn up")

However, the Trinidad and Tobago Football Association (TTFA) said to LoopTT the photos and footage shared to social media did not show the whole picture.

TTFA General Secretary Justin Latapy-George said the water which was recorded occupied only part of the stadium, and that this was a result of heavy rains over the weekend.

"There were some adverse weather patterns that came in since late last week into this morning, that led to a lot of water on the surrounding track. The water on that field usually runs off, the field is so designed that excess water runs into the track area before draining away."

"The photo that was taken shows the track area and shows the US team coming out of the dressing room area into the part of the field which is covered in water, however this is not the training area that the team will be training on. No one took a picture of the actual training surface," Latapy-George said.

Latapy-George added that the reports regarding the issue are somewhat skewed.

"No one plays football on an athletic track, so I think there's a skewed approach to what is being reported.  However I understand that this is an important game for the USA and an important closing game for Trinidad and Tobago, and we will do what we need to do to ensure that the facilities are ready," he said.

The TTFA said that stadium staff have been at work clearing away the excess water with external pumps on the surrounding track however the football field remains ready for tomorrow's match.

"When these things are put out to the world one has to be careful in understanding that there's another side to that story, and I don't think that, to this point and based on what I've seen on social media, that the other side is being properly relayed, which is one, the adverse weather conditions, and two that the playing field is ready for use, as well as the efforts we are putting in to ensure that the excess water is removed," he said.

The TTFA also shared photos showing the US team practising on the playing field on Monday. 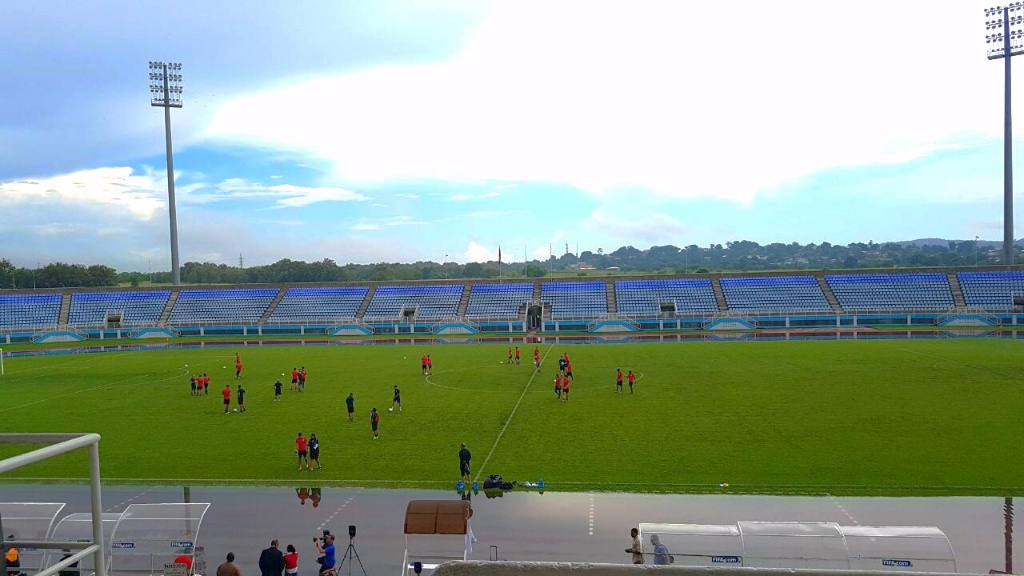 A release from the TTFA said that the decision whether or not to use the field is at the discretion of the Match Commissioner and that the TTFA continues to work alongside Stadium Management to prepare the facility for tomorrow's game, and that all parties are confident the game will be contested.

Some people criticised the flooded stadium as part of poor planning and design, while others said it was simply part of playing in 'third world stadiums'.

"These are the problems that we want to solve by design and seasonal cleanings! Taking care of your track and field starts with drainage!" Said @trackandturf.

However, some chastised the posts, saying they were in poor taste.

"So typical US. Make fun of a country with less resources and a fragile economy and less fortunate," said Twitter user @GunnerThings101.

The US likely needs at most a draw at Trinidad and Tobago on Tuesday night to qualify for its eighth straight World Cup berth.

US back on track for World Cup, Pulisic leads rout of Panama

Brazil is in; Argentina still fighting for a World Cup spot