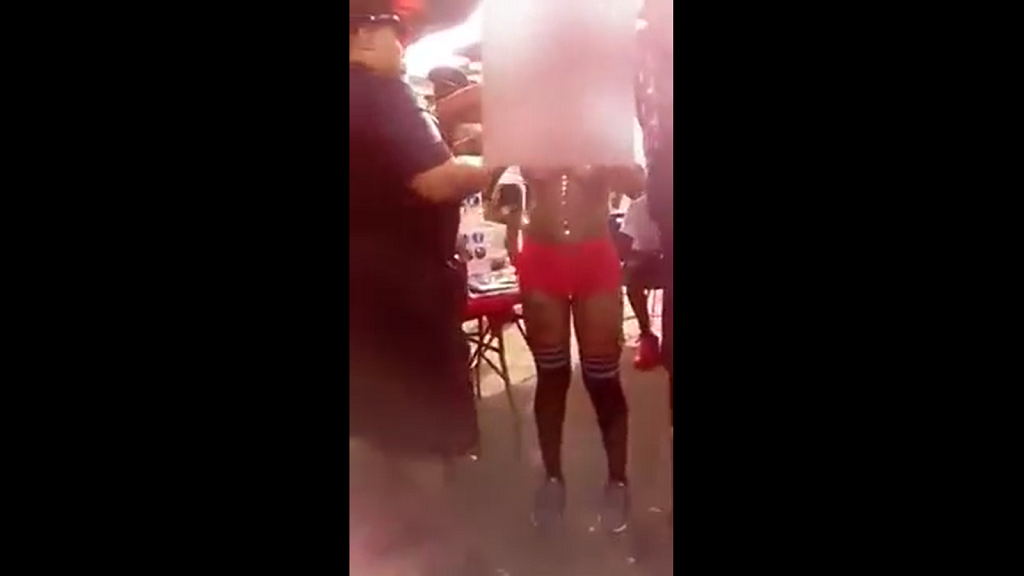 A video showing a woman who was forced to put on a t-shirt during the Point Fortin Borough Day celebrations has gone viral, drawing comments from citizens.

Facebook user Jamillion Archer made a public post to social media on May 6, 2017, showing the woman, who was seen wearing glitter nipple pasties, as she was approached by woman police officers.

In the video, a white t-shirt was procured which the woman put on. A female police officer was then seen speaking to her, appearing to explain the situation.

A Facebook user who appeared to be that of the woman who was detained said however that as her nipples were covered, she was not doing anything unlawful.

Citizens made varied comments to the video as some supported the move while others said the woman was simply wearing Carnival wear out of season.

"Hats off to the officers great good protect yourself," said one Facebook user.

Meanwhile Triva Charles asked why this is not done during Carnival time: "I applaud the officers but why isn't this done during carnival?"

Archer also commented: "I did not post this video to embarrass this young lady I posted it to show how stupid a police officer is. They covered her breast but her a** still outside. It's still nudity. But I thought if the areola is cover then u can let it hang."

"Any person who, during the presentation or performance of any stage play or concert or other dramatic or musical entertainment, or of any other form of entertainment whatsoever, or the holding of any dance, in any building or place to which the public is admitted or has access—

(a) is indecently attired;

(b) performs any lewd or suggestive dancing or actions;

(c) in any play, song, ballad or speech, uses language, or makes use of any recording, which is profane, indecent or obscene, or which is insulting to any individual or section of the community whether referred to by name or otherwise;

(d) acts in a manner calculated to hold up to public ridicule or contempt any individual or section of the community, is liable to a fine of four hundred dollars."