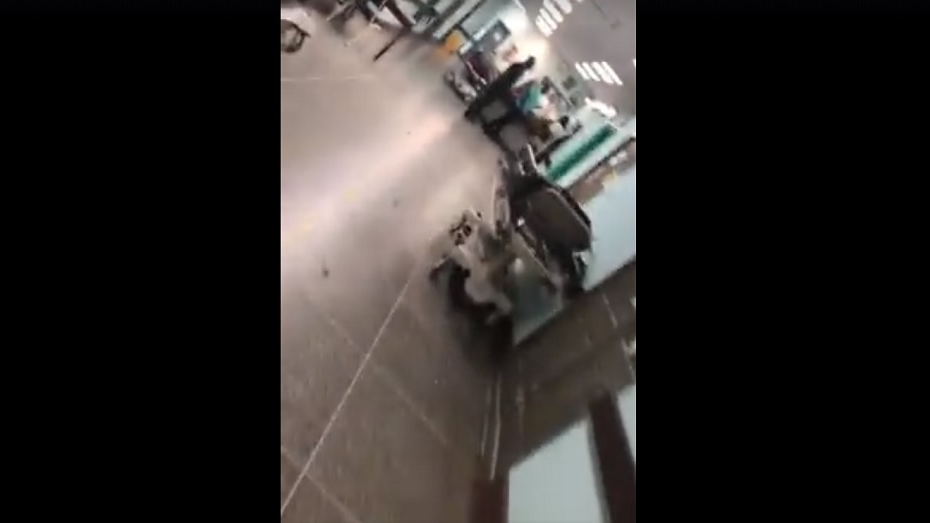 A video of a woman screaming in frustration at the alleged lack of care at a local hospital has gone viral online.

The video, which was shared to social media on Friday, was reportedly taken at the Port of Spain General Hospital and shows the interior of the hospital along with staff and several people laying in beds waiting to be treated.

The woman was heard screaming expletives, accusing the staff of doing nothing while one man with a broken arm lay moaning in pain.

"Not one f*** they doing in here...look at these people, somebody hand break outside, he in f***ing pain, these f***ing people laughing and talking and ent doing one motherc***."

"Look at these doctors, ent doing one motherc****...people in f***ing pain," the woman was heard screaming.

She said she had not received any medication for months.

"I going in St Ann's, me ent taking my medication in months," the woman said as she began overturning items.

Some supported the woman while others slammed her behaviour.

"A lot of ppl would watch this video and call that woman crazy, but if we're being truthful, those nurses and doctors don't go the extra mile. This is a result of frustration from putrid service in this country and u can literally hear the pain in her voice."

"I agree with you, everyone has a breaking point she reached hers it's sad the way the hospitals in Trinidad is treating their patients, I wouldn't want to get sick down there at all.I'm praying for change all round still love my T.N.T."

"Still have no right to be getting on so not every way yuh must carry yuh old ni**a behavior if I was one of dem doctor as yuh run up on me ah cuff yuh dong flat."

"If the public is on the other side of the fense and see how hectic the job is, they will understand that the doctors and nurses aren't jus doing nothing . It may look that way but trust me it isn't. They may look like they are not doing anything but they're are...Communication is the key along with politeness and empathy. No one will understand the seat the doctors and nurse are sitting in unless u actually walk in their shoes. The public need to be patient because there are always patients worst off that need to be seen over those who being impatient and cases that are not urgent. Many times doctors and nurses skip lunch break to facilitate the patients and it goes unnoticed."

"My mother is a nurse in the public sector and most days you would hear her complaining that she alone has to see about 15 patients and thing sometimes..not just that but some ppl come to the emergency room for the most ridiculous things...we have that attitude that we want something and we want it now doctors and nurses are human beings too they can only deal with so much at a time n is ppl Lives they dealing with so they have to be extra careful."

"This happen to me and I trip off girl I feel your pain my son could not breathe and the doctor told me I have to wait till they change shift."

"Some people vex with the lady allyuh don't know until it reach your door step yes you no what is to be in the hospital begging for assistance and god forbid you get Ignore and something bad happens to you or family member that's a very hard pill to swallow."

The North-West Regional Health Authority (NWRHA) said the incident stemmed from the relative of a male patient who had been assessed by the triage doctor immediately upon arrival, who deemed that the injury was non-life threatening.

In a statement issued Friday, the NWRHA said the patient's vitals and presenting complaint were checked and were deemed non-life threatening, and he was asked to was asked to hold on in the waiting area whilst arrangements were being made for further assessment and treatment.

"However, whilst doctors were attending to other patients in the department requiring more immediate care and attention, the relative of the patient became hostile and verbally abusive and gained unauthorized access to the treatment area."

"Upon exiting the treatment area of the A&E department, the relative and the patient left the POSGH of their own accord before the patient’s treatment was completed," the NWRHA said.

The Authority said the incident caused "significant disruption to the provision of service to patients within the general treatment area and those being treated in private cubicles in the A&E department".

The NWRHA said it is reviewing its security protocols after the incident.

"The NWRHA is taking this unfortunate incident very seriously and is reviewing its security protocols to enhance its security measures, some of which have already been implemented."

"The Authority recognises the potential impact of this incident on patients and staff and is making immediate arrangements to provide the necessary interventions to address same."

The NWRHA said it is committed to ensuring the safety and comfort of both patients and staff in the provision of quality healthcare at the POSGH and all institutions under its purview.

NCRHA: Parents encouraged to be with children in hospital