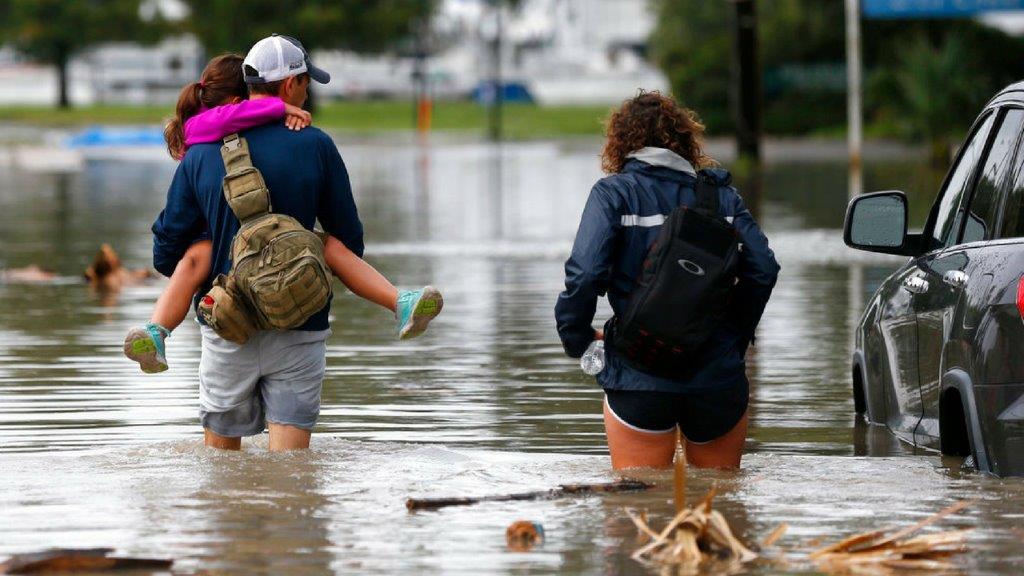 Don Noel carries his daughter Alexis, 8, with his wife Lauren, right as they walk through a flooded roadway to check on their boat in the West End section of New Orleans, Wednesday, June 21, 2017. Tropical Storm Cindy formed Tuesday in the Gulf of Mexico, hovering south of Louisiana as it churned tides and spun bands of heavy, potentially flooding rain onto the central and eastern Gulf Coast. (AP Photo/Gerald Herbert)

Tropical Depression Cindy crept northward across Louisiana toward Arkansas after churning ashore as a tropical storm early Thursday, weakening steadily but still spreading heavy rain and thunderstorms over hundreds of miles of territory from east Texas through a broad swath of the Southeast.

As a slow-moving tropical storm that formed Tuesday in the Gulf of Mexico, Cindy was blamed for one death: authorities said a 10-year-old boy vacationing with relatives on the Alabama coast was struck by a log brought in by the stormy surf. Cindy also caused widespread highway and street flooding and several short-lived tornadoes, but no other deaths or serious injuries were reported as of midday Thursday.

Off Texas, the U.S. Coast Guard helped the four-member crew of a shrimp trawler limp back to shore at Freeport after the crew radioed a distress call that they were in danger of sinking early Wednesday. A helicopter crew lowered a spare pump to the trawler, allowing the crew to stay afloat while a cutter escorted the vessel to safety.

Authorities continued to warn that driving rains spinning off from the storm could still cause dangerous flash floods.

"That continues to be the threat," said Ken Graham, of the National Weather Service Office near New Orleans. "Not only around the center of Cindy. The impact of rain can be hundreds of miles away."

Heavy rain was forecast to spread over the Tennessee and Ohio valleys on Thursday, then move Friday and Saturday into the central Appalachians. At 10 a.m. CDT Thursday, Cindy was about 165 miles (265 kilometers) northwest of Morgan City and moving to the north at 13 mph (20 kph).

National Weather Service forecasters said the storm had dumped from 2 to 10 inches (50 to 250 millimeters) of rain on various spots along the Gulf Coast from southern Louisiana to the Florida panhandle as of Wednesday.

In southwest Louisiana, not far from where Cindy came ashore before dawn Thursday, motorists in trucks were driving through knee-high water in the streets of Cameron Parish. Though swamped roads and high tides interfered with transportation, Ashley Buller, an assistant in the parish emergency office, said there were no reports of major flooding.

Some other drivers, though, were pulling over and not attempting to navigate the flooded roads in the area. Some of the low-lying clouds were rotating, and gusty winds whipped across the landscape.

Elsewhere, the Mississippi coast received some of the heaviest rain.

"It's pretty disgusting, but I don't have flood insurance because they took me out of the flood zone," said Bertucci, whose store is near a bayou. "We're just trying to clean everything up and hope it doesn't happen again."

And rains were spreading inland.

In Knoxville, Tennessee, the power-generating Tennessee Valley Authority, said it was drawing down water levels on nine lakes it controls along the Tennessee River and its tributaries in Tennessee, Alabama and Kentucky, anticipating heavy runoff from Cindy's remnants. The TVA manages 49 dams to regulate water, provide power and help control downstream flooding.

In West Virginia, forecasters warned of possible flooding, damaging wind gusts and severe thunderstorms once what remains of Cindy arrives and merges with another storm front later in the week. Last June, torrential rains and flooding claimed 23 lives in West Virginia.

Some threats could be lurking in the flood waters, Alabama state officials warned: Floating colonies of fire ants could form in the gushing surge of water, the Alabama Cooperative Extension System said in a statement.