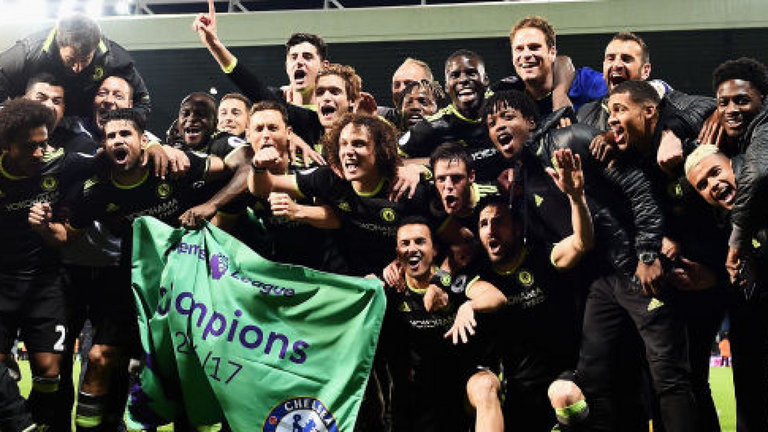 Chelsea regained the Premier League title as Michy Batshuayi came off the bench to earn a 1-0 victory over West Brom at The Hawthorns on Friday.

Following Monday's comfortable 3-0 win at home to Middlesbrough, Antonio Conte's side knew just three points were needed to ensure the trophy would return to Stamford Bridge and, in keeping with their efforts throughout much of the season, the Blues delivered when it mattered.

So often in 2016-17 the likes of Eden Hazard, Diego Costa and Pedro have been the men to inspire the Blues, but on this occasion it was Belgium international Batshuayi's turn to revel in the spotlight.

Hazard and Pedro had been smartly shackled by the Baggies' resolute backline, so much so that Conte substituted his star playmakers and replaced them with Willian and Batshuayi, the latter of whom stabbed home the decisive goal eight minutes from time.

Chelsea have played some sublime football at times throughout this campaign, although the winner was anything but - Gary Cahill's shanked shot finding its way to Cesar Azpilicueta, who squared low across the six-yard area for Batshuayi to get the better of Ben Foster and spark scenes of delirium in the away end and on the touchline.

Conte's celebration was typically frantic and the victory was just reward for the Italian, who has masterminded the Blues' ascent in his debut campaign, helping to put to bed memories of last season's dismal defence of the 2014-15 crown.

In the hunt for a club-record Premier League points tally, West Brom still had plenty to play for and came close to delivering an early dampener on Chelsea's party when Salomon Rondon's flicked header had to be touched over the crossbar by Thibaut Courtois inside 25 seconds.

The hosts were not without threat, however, and twice James McClean played poor passes to bring a disappointing end to promising counter-attacks - both of which came from Chelsea corners.

That search continued early in the second half as Foster got down brilliantly to tip Victor Moses' low drive behind within two minutes of the restart.

Tony Pulis introduced Claudio Yacob to shore up the Baggies' midfield, and Craig Dawson was grateful for his team-mate's presence on the line to prevent an own goal following quick feet from Hazard.

Despite their dominance of possession, Chelsea still had to be wary of their hosts' countering capabilities and, left one-on-one with David Luiz, Rondon slipped clear and raced towards goal, only to be denied by a fine block from Azpilicueta.

Substitute Nacer Chadli shot wide at the end of another break as Chelsea looked uncharacteristically vulnerable, but any concerns were put to bed as Azpilicueta made the most of Cahill's wayward effort to find Batshuayi, who picked the perfect time to score his first Premier League goal since August and get the Blues' title celebrations under way in earnest.

- Chelsea won their sixth top-flight title and fifth in the Premier League era. Only Manchester United (13) have won more PL titles than the Blues.
- Chelsea are the first club to win the English top-flight title on a Friday since Arsenal at Anfield in 1989.
- Antonio Conte is the fourth Italian manager to win the English top-flight title after Carlo Ancelotti, Roberto Mancini and Claudio Ranieri.
- Conte is the fourth manager to lift the Premier League trophy in his first season in England (Mourinho 04-05, Ancelotti 09-10, Pellegrini 13-14).
- Conte has won the league title in four successive seasons as a club coach (also won Serie A in 11-12, 12-13 & 13-14).
- Chelsea scored with their 23rd shot of the match against the Baggies.
- Eden Hazard was substituted off for the 24th time in the Premier League this season; a league-high.
- A Belgian player has scored the title-deciding goal in each of the last three Premier League seasons (Batshuayi v West Brom in 2016-17, Hazard v Spurs in 2015-16 and versus Palace in 2014-15).

My heart is in Italy, says Chelsea boss Conte