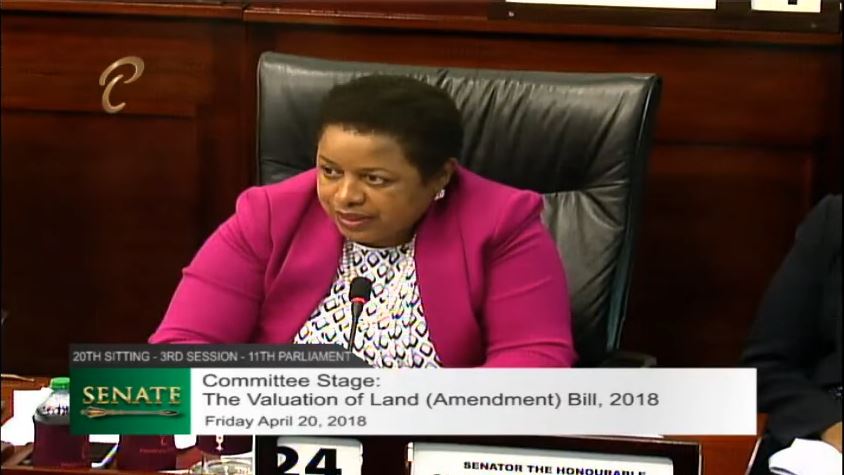 Minister in the Ministry of Finance Allyson West says a $5000 fine for those who fail to file their Valuation Return Forms or who willfully provide wrong information is reasonable.

The Minister made the comment while speaking during the debate on the Valuation of Land Amendment Bill 2018 in the Upper House on Friday afternoon.

West’s comments come after Senator Wade Mark claimed that the fine is too high.

However, Mark believes the clause allowing for this cannot remain in the final bill.

“They’ve increased gas prices on three occasions and they come here and in the original bill there was $500 and they have gone to $5000, the amount of people of who are unemployed in this country and working for the minimum wage, $5000 is a lot of money,” Mark said.

However, the Minister in the Ministry of Finance has sought to defend the fee.

“We’re seeking to increase the fine from $500 to $5000. The main reason for imposing a fine is to act as a deterrent for people to not flout the legislation. If the fine is too minimum that deterrent factor will be absent. When we look at the old legislation which was introduced in 1920 the fine for the identical offence was $400 dollars. A century later having a fine of $500 you must acknowledge that there is no way that could act as a deterrent, not in a country where Trinidadians and Tobagonians are prepared to pay $1500 to go to a Carnival fete and pay $10,000 for a Carnival costume. $500 is not a deterrent,” Minister West said.

West said she is not saying that $500 is not a significant amount of money, however, the Minister believes it is not the kind of deterrent that is needed to ensure compliance.

The Minister in the Ministry of Finance is of the view that a $5000 fine is reasonable.

“This is the reason why we are seeking to adjust the fine from $500 to $5000. There are some senators who, and I agree with them who say that for some $5000 is not of a deterrent, but we have to get to a middle point where we don’t overburden the people to whom $5000 is a significant amount. So we’ve arrived at an amount that we find is reasonable, “she said.