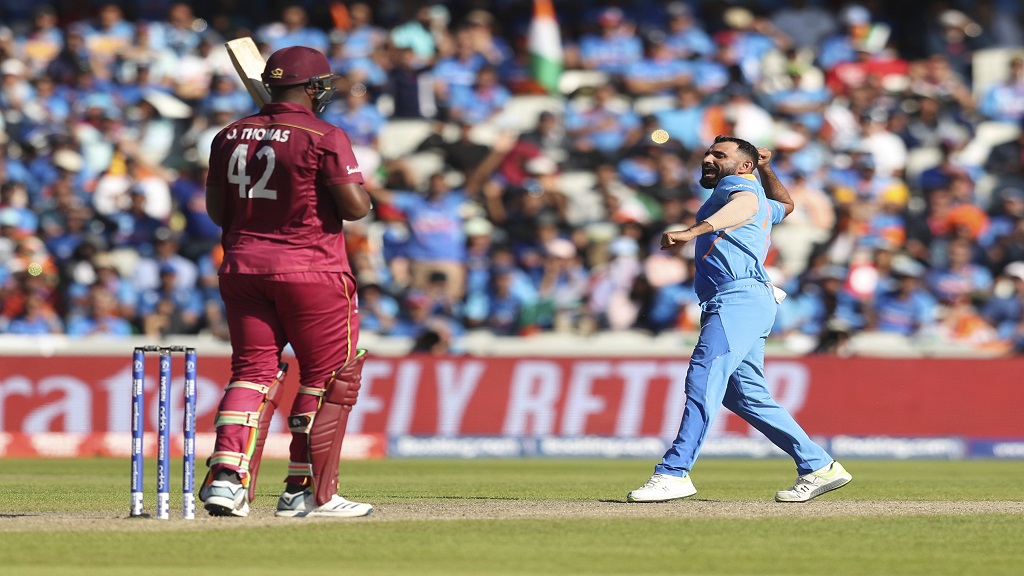 Mohammed Shami was a late inclusion in India's starting XI at the Cricket World Cup and yet he's finished off two victories within a week.

Shami finished off the West Indies at Old Trafford on Thursday with a four-wicket haul that netted dismissals at each end of the innings. By doing so, the veteran paceman ended the West Indies' hopes of advancing to the playoffs, too.

India continued their unbeaten streak with a 125-run victory, with skipper Virat Kohli guiding his lineup to 268-7 before Shami chimed in with figures of 4-16 to skittle West Indies for 143 in the 35th over.

It was a fifth win in the tournament for India, and a rebound in form following a close call against Afghanistan last Saturday when it took Shami's hat trick in the last over to seal a nervy result.

"These haven't been massive scoring games, but we've found ways of winning," Kolhi said. "Fielders ... putting bodies on the line, showing their desperation to win. The opposition feels like this team is here to win.

"A lot of self-belief in the team room right now — we feel like we can win from any situation."

It was a fifth loss in six games for the West Indians since a commanding opening win over Pakistan, and it makes them the third team to drop out of playoffs contention along with Afghanistan and South Africa.

Only Kohli, with 72 from 82 balls, and MS Dhoni, with an unbeaten 56, posted half centuries for India. Hardik Pandya contributed 46 from 38 balls in a 70-run stand with Dhoni.

The Indian batsmen grafted in the conditions. The West Indian batsmen didn't last long enough to really settle, with opening bowlers Jasprit Bumrah and Shami getting on top early with their pace and seam movement.

Shami was drafted in as the new-ball bowler when Bhuvneshwar Kumar injured a hamstring, and with eight wicket in two games he'll be hard to dislodge.

Shami dismissed Chris Gayle (6) and No. 3 Shai Hope (5) in his opening spell and, after an innings building 55-run partnership between Nicholas Pooran (28) and Sunil Ambris (31), it all went downhill for West Indies.

Shami returned for two late wickets, including the last one with a short ball that No. 11 Oshane Thomas could only fend away to slip.

India moved into second place with 11 points, one behind defending champion Australia, and travel to Birmingham to play England on Sunday.