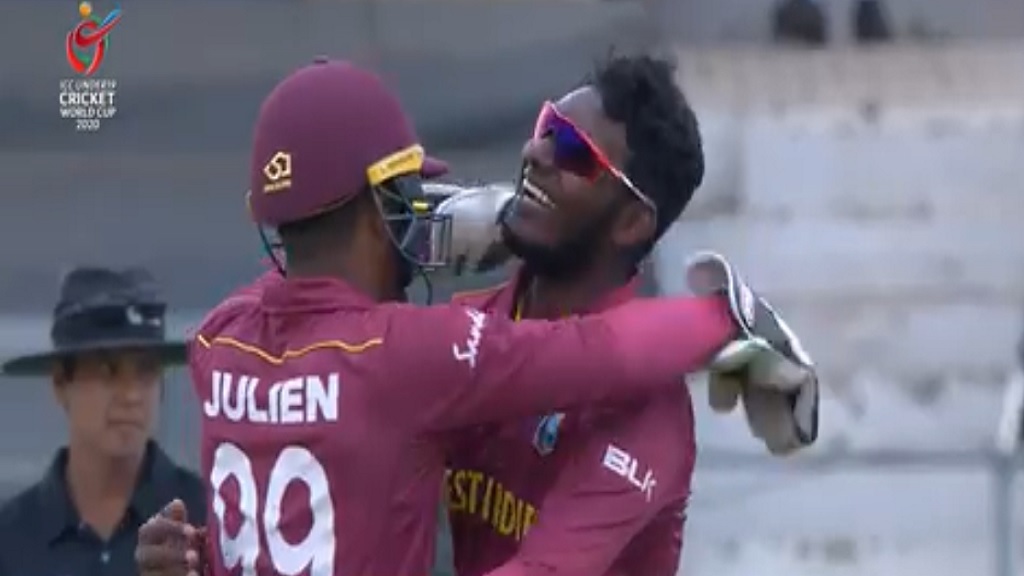 West Indies players, right-arm off-spinner Matthew Patrick (right) and Leonardo Julien, celebrate the wicket of Australia's Ollie Davies during the fifth-place playoff game of the 2020 Under 19 World Cup in South Africa on Friday, February 7. The game was eventually washed out.

West Indies finished fifth at the 2020 Under 19 World Cup in South Africa after the fifth-place playoff game against Australia was washed out on Friday.

Australia had posted 319 for eight and West Indies were 62 for one in the 12th over in their reply when the rain came down in Benoni.

According to tournament rules, in case of a washed-out knockout game, the team that finished higher on points at the end of the group stage would finish higher. West Indies were unbeaten in Group B, while Australia had lost to West Indies. As a result, West Indies were adjudged fifth place. That defeat against West Indies consigned Australia to sixth.

Australia posted their big total courtesy of half-centuries from opener Liam Scott (66), No. 5 Lachlan Hearns  (58) and No. 6 Cooper Connolly (64).

Earlier, Scott and fellow opener Sam Fanning (38) had put on 99 in 15.5 overs to hand the Aussies a good start.

Right-arm off-spinner Matthew Patrick was the most successful West Indies bowler with three for 34 off his allotted 10 overs.

West Indies, in their chase of the victory target of 320, were also off to a good start as openers Kimani Melius and Leonardo Julien struck 62 runs in 12.3 overs. Melius fell for 39, cutting Scott to point. However, soon as Melius began to leave the field, the rain began to fall which forced the umpires to call the match off some time later.

Julian was undefeated on 14.