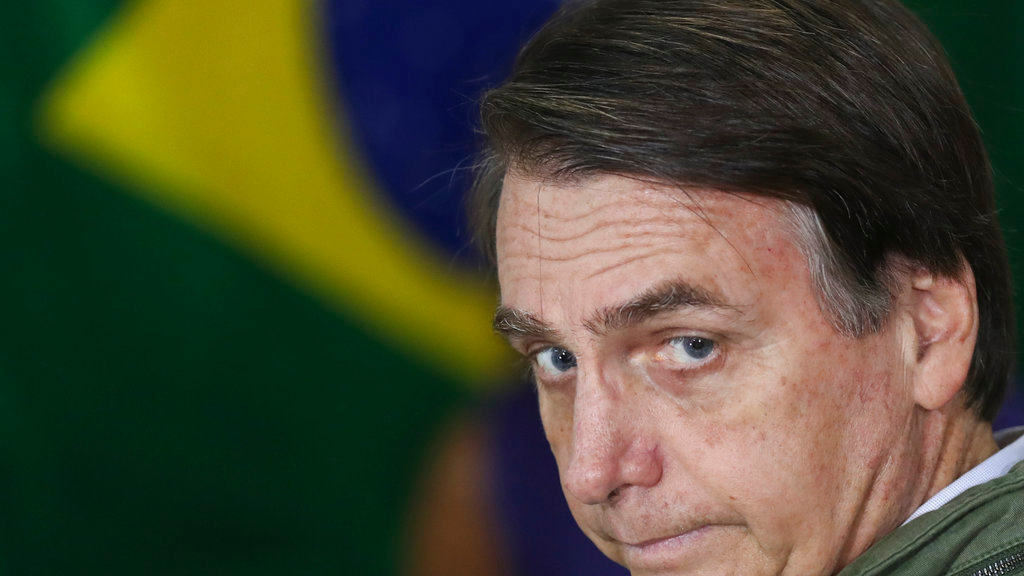 Jair Bolsonaro, presidential candidate with the Social Liberal Party, looks on as he arrives to cast his vote in the presidential runoff election in Rio de Janeiro, Brazil, Sunday, Oct. 28, 2018. (Ricardo Moraes/Pool Photo via AP)

Far-right congressman Jair Bolsonaro won Brazil's presidency Sunday on promises to overhaul several aspects of Latin America's largest nation. A glance at the top issues that could change in a Bolsonaro administration:

More than half of the Amazon rainforest is in Brazil, and environmentalists worry Bolsonaro's presidency will open it up to increased deforestation and mining. He has also called for a halt to recognizing indigenous land in a way that protects it from various kinds of exploitation, saying that "not a centimeter will be demarcated for indigenous reserves."

Bolsonaro vowed to follow in U.S. President Donald Trump's footsteps and leave the Paris climate accord, though he recently backpedaled on that stance. He said the country would stay in the agreement - as long as it did not have to give up jurisdiction of the Brazilian Amazon. The accord makes no mention of this possibility.

Many observers believe Bolsonaro's strong ties to agribusiness leaders in Congress, part of the powerful "ruralist caucus," will lead to a reduction in environmental protections as farming interests win out.

One example is his promise to combine the agriculture and environment ministries into one — a move environmentalists worry would result in more land being opened up to farming. In a recent Facebook Live session, Bolsonaro said he would consider keeping them separate, though he said he is still discussing the idea with agribusiness leaders.

At the heart of Bolsonaro's campaign was his promise to crack down on Brazil's soaring crime, including allowing police more leeway in the use of force. He has promised more legal protections for police who kill on the job, going so far as to say an officer who kills a "bum" should be "celebrated, not prosecuted."

Human rights activists worry that in a country where police violence is already rampant, officers could kill more innocent people with impunity. Bolsonaro has argued that the current law is too restrictive and that police should be allowed more room to defend themselves.

Bolsonaro, famous for posing with his fingers in the shape of a gun, also wants to make it easier for citizens to own firearms. Throughout his campaign, he has said that "good citizens" should be able to defend themselves and their property.

He has also promised to reduce the age at which defendants can be tried as adults to 16. Criminal justice experts warn that will lead to even higher rates of incarceration.

Some analysts have said Bolsonaro's policies could unleash even more violence, and others have questioned whether he will quickly be able to reduce crime, since state governments are largely responsible for security.

Brazil is recovering from its worst recession in decades, and investors and members of the business community are hoping Bolsonaro will jumpstart growth. He has said he does not understand much about economic matters and has instead promised to follow the lead of adviser Paulo Guedes, a banker and University of Chicago-trained economist.

Under Bolsonaro, Latin America's largest economy could see a reduction in the size of government, including a halving of the number of ministries, the privatization of many state-owned companies and the opening up of a closed economy through new trade agreements and lower import tariffs. These proposals have cheered markets about Brazil's future, but many remain vague, and it's unclear how much sway Guedes will have.

After lame-duck President Michel Temer failed to pass his pension overhaul, all eyes are on Bolsonaro to see how he will try to save country's failing pension system — and right the government's finances.

By international standards, the Brazilian system allows workers to retire too early and get overly generous pensions, significantly contributing to the government's unsustainable budget deficit. But any move to reduce benefits will be unpopular, so Bolsonaro will have to build a broad coalition in Congress to get his proposal through. And he will probably have only a brief window when he first takes office to do so.

Bolsonaro's principal proposal on pensions is to create a system of private accounts, in which people save for their own retirement. It's not clear how or how quickly he would transition to this new system.

In foreign policy, Bolsonaro has also pledged to emulate Trump. He has said he will favor bilateral trade deals over multilateral ones, transfer Brazil's embassy in Israel from Tel Aviv to Jerusalem and take a tougher line on neighboring Venezuela. He said frequently that Brazil could suffer an economic collapse similar to Venezuela's if voters elected his left-wing rival. He has also suggested putting Venezuelans fleeing their country's chaos in refugee camps.

Bolsonaro has talked tough on China, Brazil's biggest trade partner. In February, he visited Taiwan, which Beijing claims as its territory, and he has resisted talk of Chinese investment in strategic Brazilian state companies. He told a radio station that Brazil cannot "allow China or any other country to come and buy Brazil, instead of buying in Brazil."

As a retired army captain, Bolsonaro spent much of his 27 years in Congress prioritizing the military's interests, and he promises to continue doing so as president.

He vowed to fill his Cabinet with military officers, already announcing former Gen. Augusto Heleno as his minister of defense.

"The nation is looking to the armed forces as a guarantee against barbarity," he wrote in his government plan.

Brazil votes amid anger at the ruling class