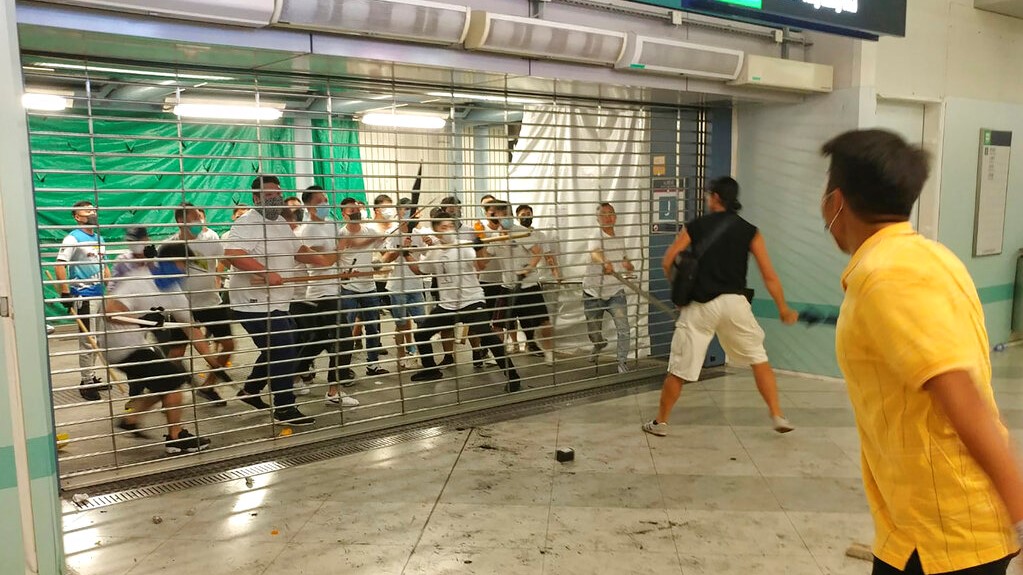 In this Sunday, July 21, 2019, photo, men in white shirts armed with metal rods and wooden poles attack commuters at a subway station in New Territory in Hong Kong. Hong Kong is reeling after a large gang of men in white shirts brutally beat dozens of people inside a train station in a shocking new twist to the city’s summer of protest. (Apple Daily via AP)

Hong Kong is reeling after a large gang of men in white shirts brutally beat dozens of people inside a train station in a shocking new twist to the city's summer of protest.

Six men have been detained, some with gang links, police said, without elaborating. The sudden attack, which came as a massive protest was winding down Sunday night, has spurred speculation about the men's backgrounds, motivations and possible political ties.

What is known so far:

Some of the attackers wore face masks, while others did not. All were clad in white, in contrast to the protesters' black, and armed with wooden poles and steel rods — weapons that they seemed to swing indiscriminately at residents making their way home at the end of a long day.

They descended on Yuen Long station a little more than an hour before midnight, apparently targeting pro-democracy demonstrators but hitting others as well.

By the time police arrived, they had fled, leaving bloodstains on the platform. Forty-five people were injured, including a man left in critical condition.

Hong Kong police detained six men on Monday in connection with the attacks. Some came from rural parts of Yuen Long. They ranged in age from 24 to 54, and their occupations included drivers, hawkers and renovation workers, senior police official Chan Tin-chu said.

"Some of them have triad backgrounds," he told reporters, referring to organized crime syndicates that hold sway over certain neighbourhoods in Hong Kong.

T. Wing Lo, an organized crime expert at the City University of Hong Kong, said the scale of the attack indicated that it was likely organized by a triad that, with the promise of payment, rounded up people in the rural area to participate.

The area around Yuen Long station is primarily controlled by two triad groups called Wo Shing Wo and 14K, Lo said, adding that the groups generally don't allow others to commit crimes in their territory.

WHY DID THEY DO IT?

It's all about the money.

In the past, triad members have been linked to attacks both against pro-democracy movements and in support of them. Thugs suspected of belonging to triad groups beat up protesters during Hong Kong's 2014 Occupy Central demonstrations, and in an earlier era, they helped 1989 Tiananmen Square activists flee mainland China — all for a price.

"The Hong Kong triad only works for money, not for political ideology," Lo said. "They will work for anyone."

Because the deals are arranged through a middleman, the actual commissioners of triad actions often remain unknown.

Hong Kong's leader, Carrie Lam, has dismissed allegations of collusion between the thugs and the police, who some Hong Kong residents have accused of deliberately failing to intervene during the attack.

Lynette Ong, a political science professor at the University of Toronto who has written about China's "thugs-for-hire," said governments have hired gangsters to attack protesters elsewhere, though it is unclear who instigated the Yuen Long assault.

"The fact they were sent to beat up protesters — it has to be someone who wants the protests to stop," Ong said.