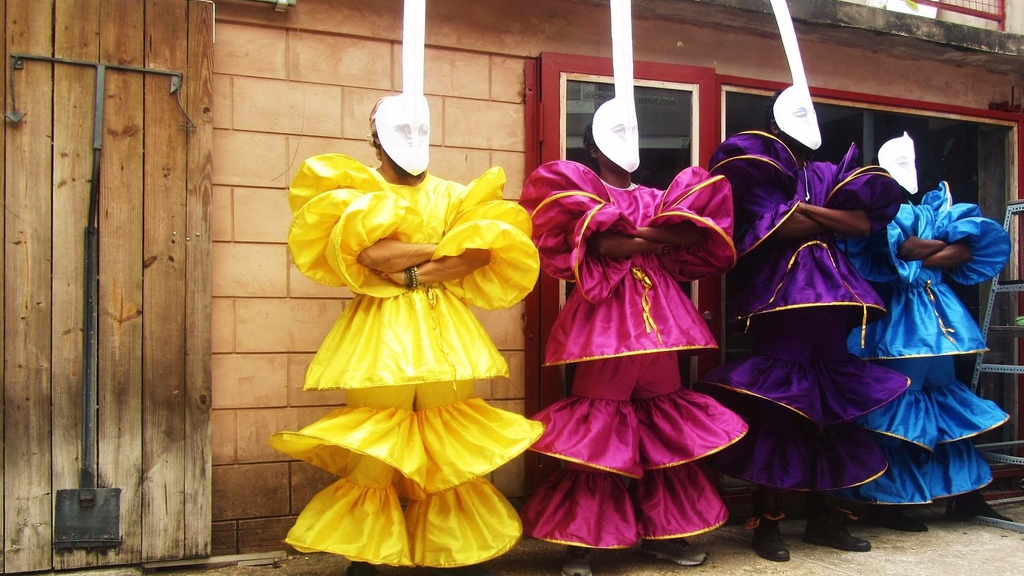 Whether it is about educating us about the giants, living and dead who have shaped the cultural landscape or advocating for policies to boost arts and culture, he has been walking the talk.

His Wirebend Folklore Theatre is a testimony to that passion. 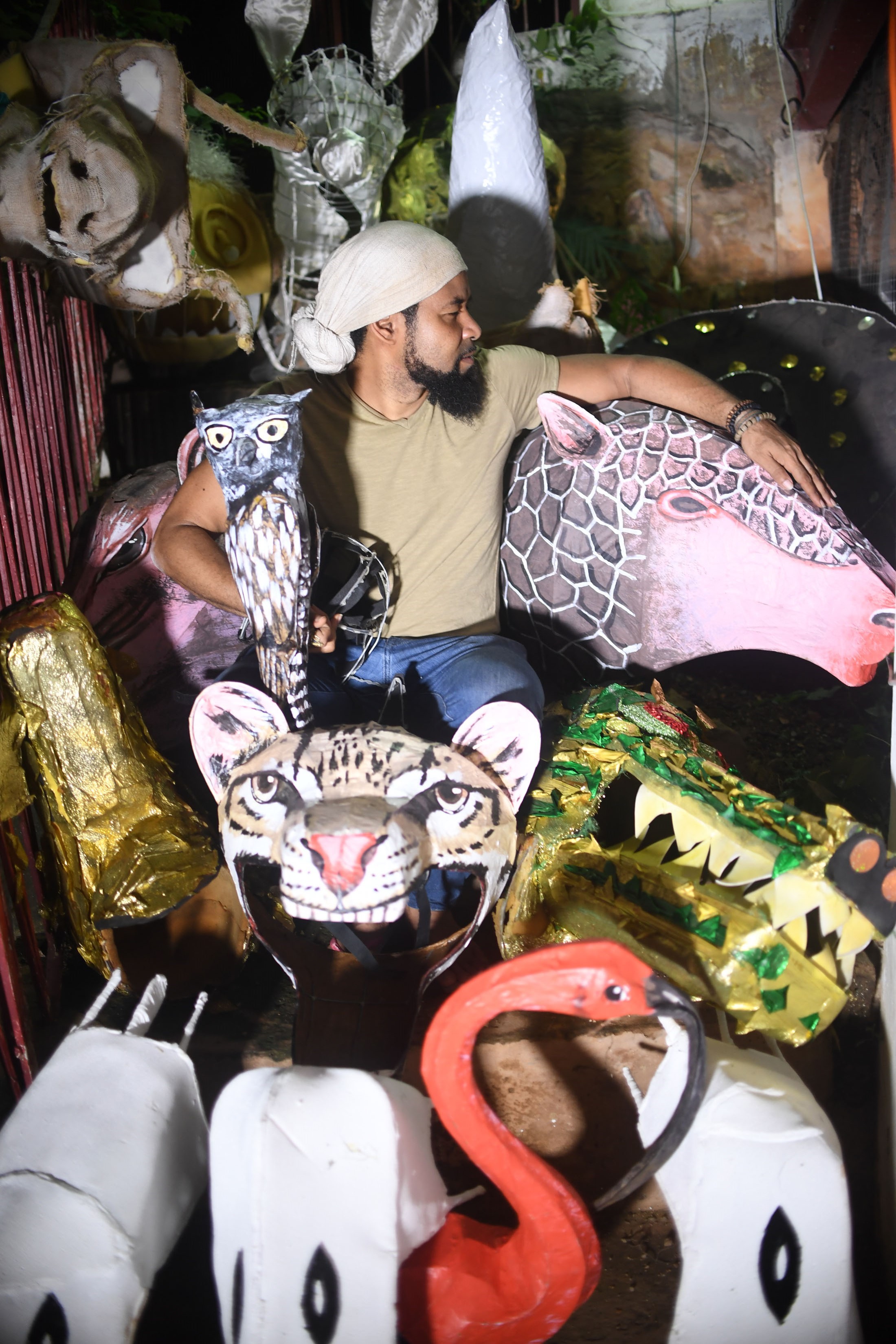 Rubadiri with a menagerie of artisan created costumes

Now in its third year, the Theatre brings to life ancestral, indigenous and modern folklore by combining master artisan costuming with interactive animation.

It’s a project that allows Victor to merge two worlds, that of the artisans he has encountered in Hosay, Carnival and Ramleela and young, cutting edge animators.

“I do mas, theatre and art. Wirebend enables me to tell these incredible stories from all our ancestries and those distilled here that contain the essence of who we are and what we are about that impact the way we live in the way Disney does,” he explained.

“It is a way also to preserve and innovate on the artisan traditions, a chance to move their skills outside of the festivals where they create these magical things and into spaces where they could dream and stretch and go clear. It is also a way to re-contextualise the mythological and traditional characters and costumes that already exist.” 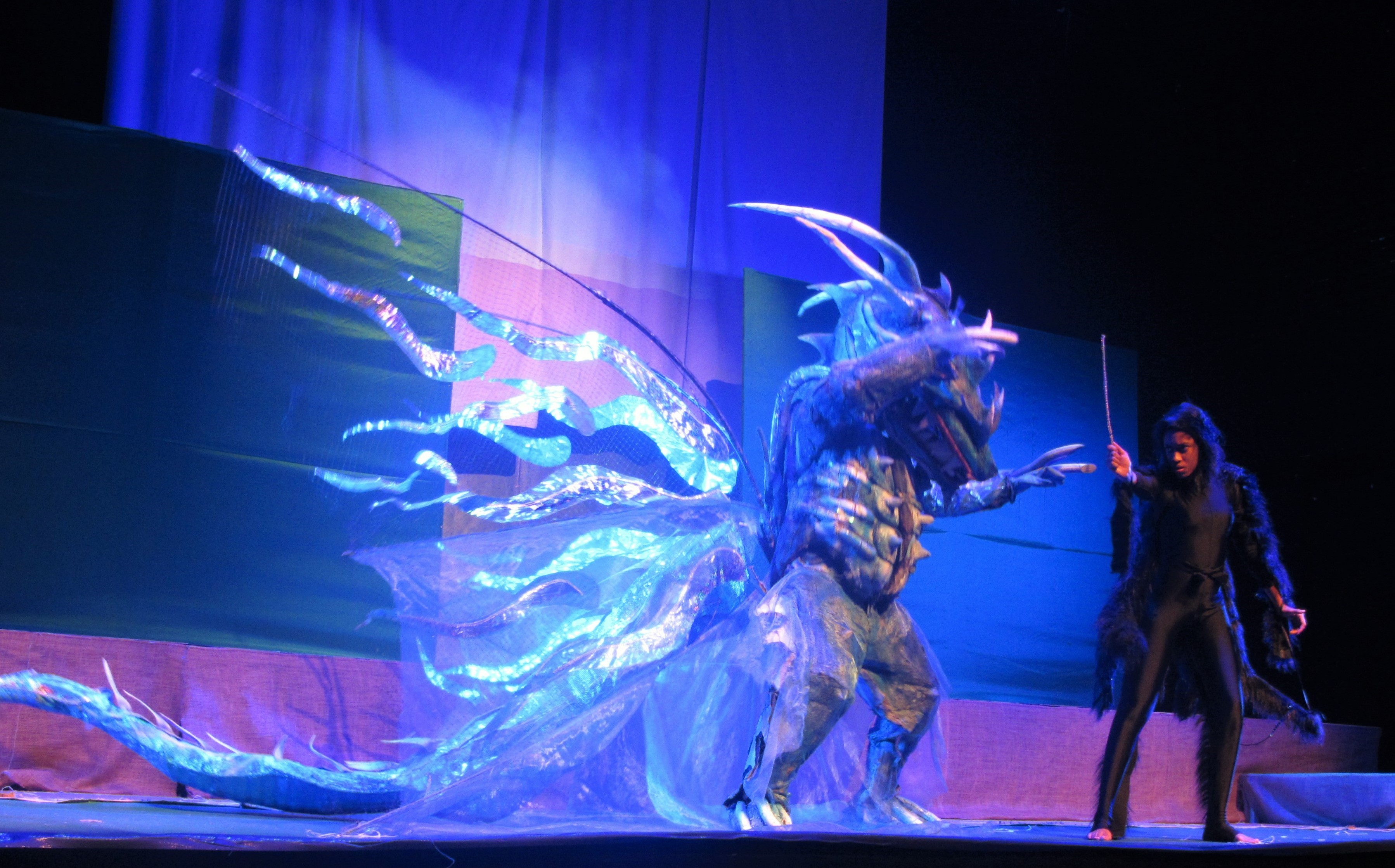 Anansi confronts the 3rd Dragon from 'Anansi and the 10 Dragons'

The magical, mystical stories that Victor creates in the Wirebend Theatre were initially conceptualised for television. But raising the required money proved challenging and Victor realised he could present his work for far less via the stage.

“In the last 23 years I tried to do three movies and they would all cost over a million dollars. I raised some of the money but not all.  And then I realised I could give an audience that same feature-length performance for one-third of that cost in theatre. It was a way to bridge two mediums so I decided to start where we are. We started with our strength and it has reached to place where we can now think about doing a television series. We have sets and costuming. We just need the money to shoot and for post-production. It is within striking distance,” he said.

In total, Victor has written about 12 stories. They are grand, intricate stories that are rooted in history, folklore, mythology and adventure. Each production features three stories.

This year, the first story is called the Four Kings and the Last Deer in the World which tells the story of four ethnic kings chasing a golden deer. They see an old man and ask him to solve their problem and he gives each of them a story, the creation myth of each other’s culture.

The second is called Anansi and the 10 Dragons which tells the tale of the son of the good King Brer who is kidnapped. A ransom note sent by 10 dragons says that whosoever answers their riddles will keep their life, free the Prince and save the kingdom. All are defeated and the task falls on Anansi. 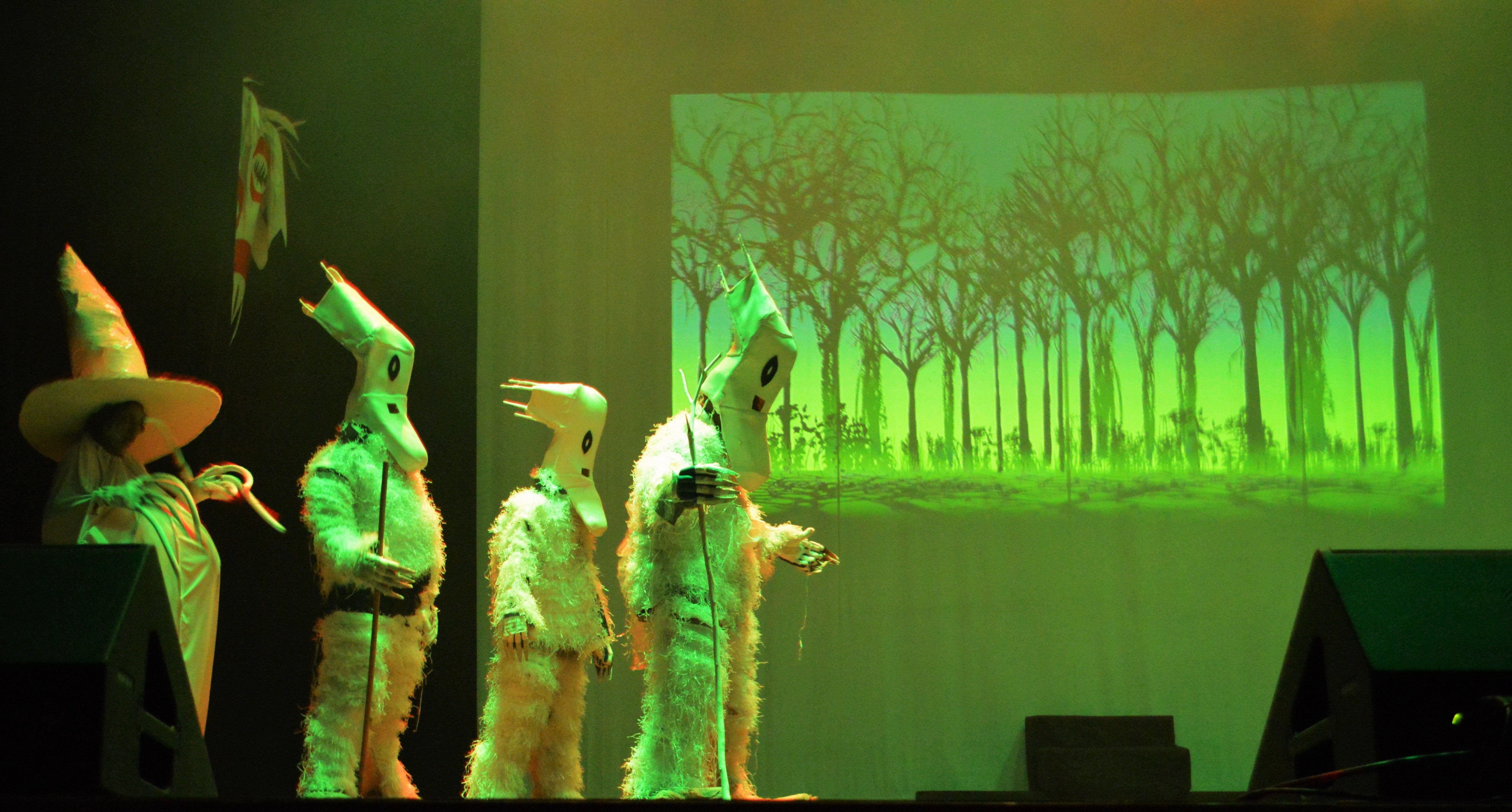 The Boy fights off the Imps from 'The Boy & His Dog'

The third story is called The Boy and His Dog.

“My dad used to tell me this story, it used to scare me but I always wanted to hear it. It is about a boy who lived with his grandmother at the edge of the forest and he got a puppy which turned out to be magical. Whenever the boy is in trouble a bucket of water turns to blood and the dog knows the boy is in trouble and races to protect him. There is also a witch who eats little children,” Victor explained.

Victor’s vision is inspired by the genius of Jim Henson, the late master puppeteer of Sesame Street fame.

‘There was a period I thought I was going to die and that focuses the mind on what you have to do and certain things. I found myself completely obsessed by Sesame Street and Jim Henson, all the collaborators, master orchestral conductors who loved their jobs enough to write songs about the letter N.

“I was just obsessed and when I came out of that state, I realised Henson was the one I had the most connection with because of the nature of the work he did and how his work impacted my entire generation across the planet. It kind of changed my headspace in terms of what I thought was possible and when I wanted to start back my art what I would choose. That is a big reason I chose this as the main thing that I have done as a creative person,” said Victor. 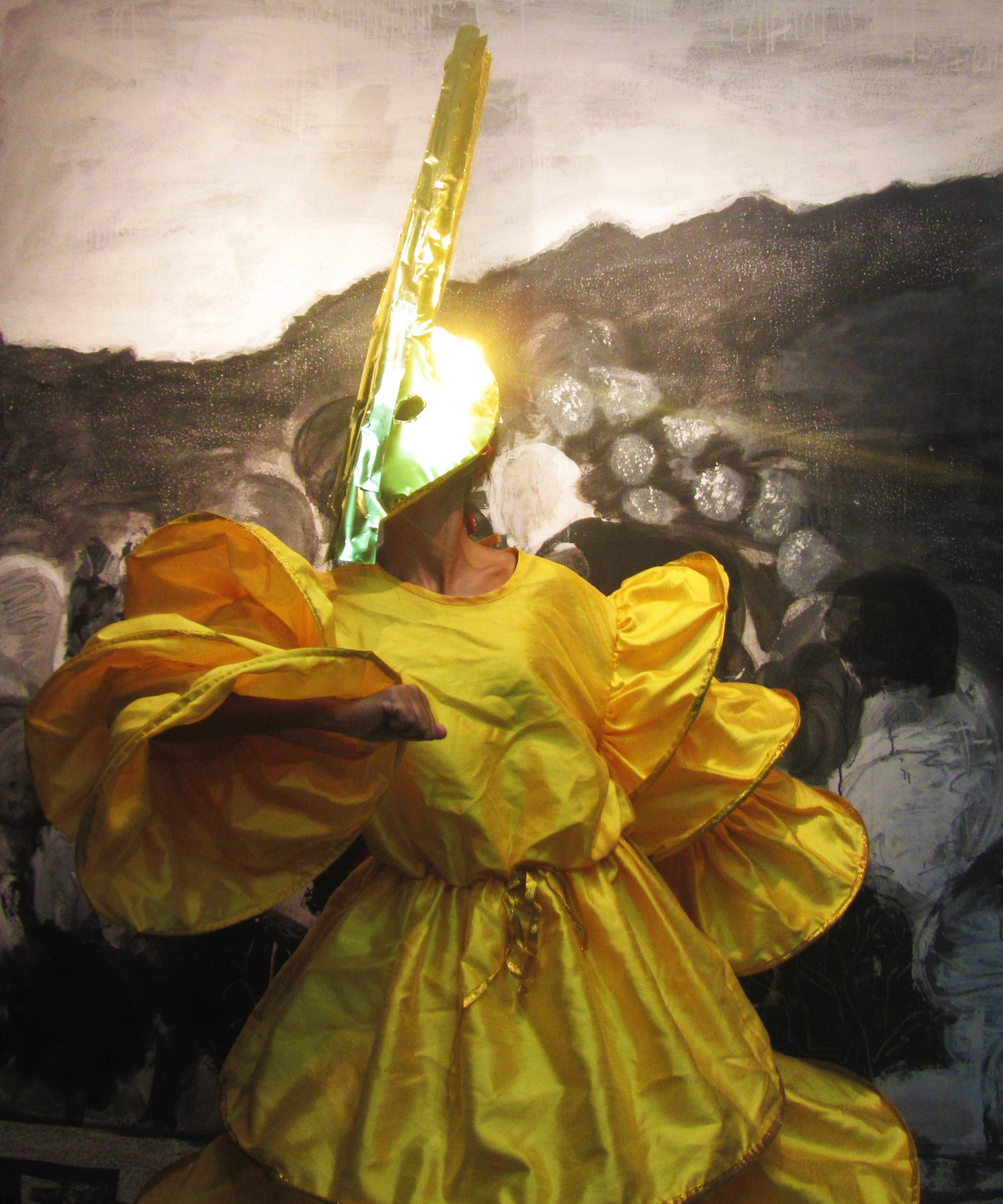 His target audience is the youth.

The first year he took the Wirebend Theatre to mostly primary schools where they did five stories including a cricket-themed story.

The second year he took the theatre to secondary schools.

“This was the test - mature, hardback, cynical, media savvy people and they were acting just like the kids. We said yeah we have something here,” he recalled.

In 2017, the Wirebend Theatre has been busy on the road with a South tour.

From October 26 to 30 the Theatre will be at the Auditorium at the Government Campus in downtown Port-of-Spain.

Families and schools are urged to attend and immerse themselves in the indigenous productions.

“My theory is that storytelling is the central act of human civilisation. We are the symbolic animal and that is what makes us different from other animals. It means that it is a need just like water and food. There are seven types of stories that all humans need to keep them sane such as the hero myth, the kingdom story, family, but all serve different purposes and they are all that binds society together.  It is really how you populate those stories. We need to see ourselves in our stories for all types of reasons or we will get captured by systems with other stories.

“My aim is to compete with Nickelodeon and Disney. The aim is that when people step into our space that is what we are competing with. For that two hours and a half we have you we will obliterate that stuff,” he declared.

Catch the Wirebend Folklore Theatre at the Auditorium of the Government Campus, Richmond St. Port-of-Spain from Oct 26 to 30. For more details call 797-0949.

Dreams from a flight:Green Days comes to theatres, UWI student is lead