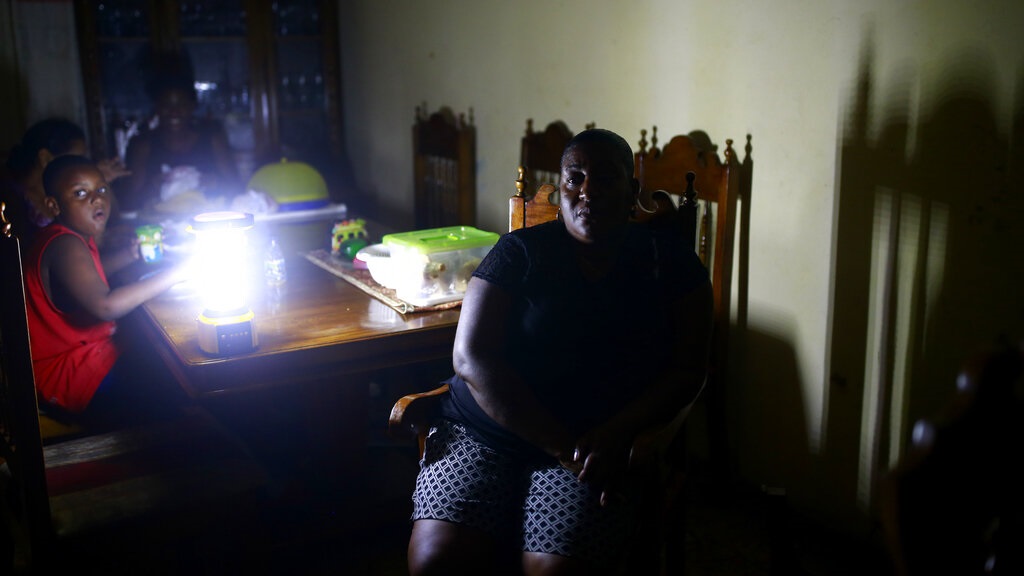 When her daughter was 4 years old, Jennifer Jean started a small catering business in Bourdon, a lower-middle-class district of the Haitian capital.

Starting with the occasional wedding or corporate meeting, she grew the business into a venture that earned her as much as $1,000 a month, enough to pay bills and send her now-teenage daughter and her 7-year-old son to a good private school.

Then the blackouts started, making it impossible to do basic activities. Without refrigeration, she now has to buy ice on the street to keep her prepared food cool. 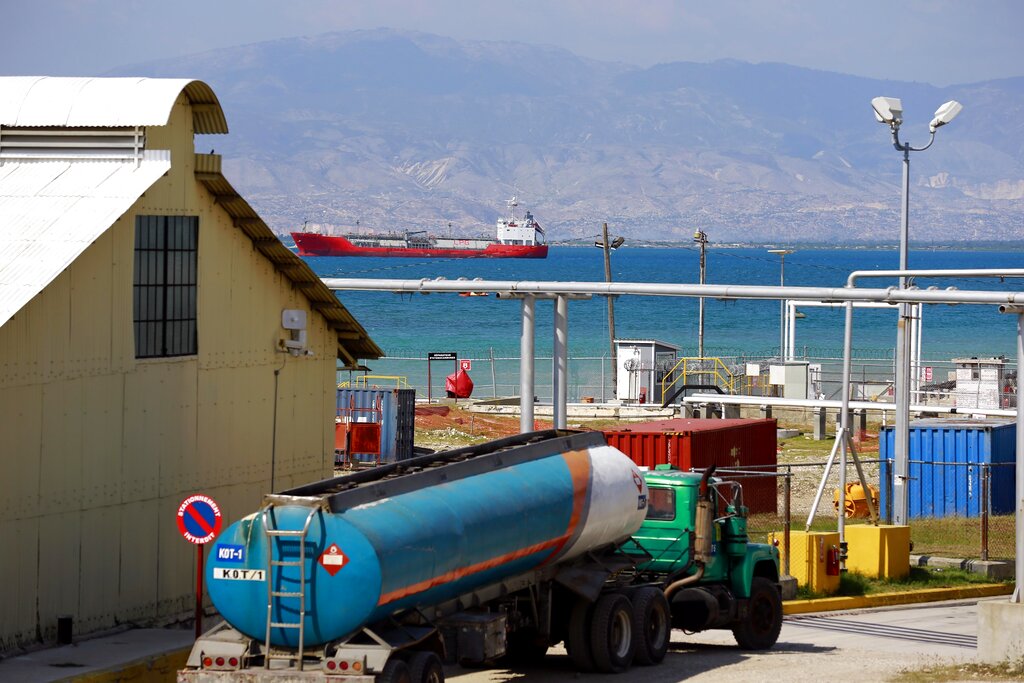 (Photo: In this April 16, 2019 photo, a tanker truck waits to fill up at the Thor terminal where a ship loaded with fuel awaits to unload its cargo in Carrefour, a district of Port-au-Prince, Haiti. Through the Venezuelan aid program known as Petrocaribe, Haiti once received roughly 60,000 barrels of oil a day under favorable terms that beat anything on the open market. (AP Photo/Dieu Nalio Chery).

"Back in the day you were able to take your car out any time of night, 1 a.m. or 2 a.m.," said Jean, who is thinking of migrating to the United States. "Now all the streets are dark. You just don't know what you are going to run into."

Through the Venezuelan aid program known as Petrocaribe, Haiti once received roughly 60,000 barrels of oil a day under favorable terms that beat anything on the open market. More than half the costs of the oil, which came at a heavily discounted price, were repayable over 25 years at a 1% interest rate, allowing the government to supposedly use the windfall for economic development. In exchange, Haiti reliably backed Venezuela against the United States in regional forums such as the Organization of American States.

But as President Nicolás Maduro's government has struggled with plunging petroleum production and a cratering economy, Venezuela has stopped sending billions in subsidized oil to countries throughout Central America and the Caribbean, including Haiti, where the end of cheap oil has meant a sharp reduction in power.

Meanwhile, Haiti's Bureau of Monetization of Development Aid Programs, or BMPAD, quickly ran into its own difficulties. After starting to buy oil on the global market, the bureau said this year that it had run out of operating funds and stopped regularly delivering fuel needed by power station operators to keep the lights on. 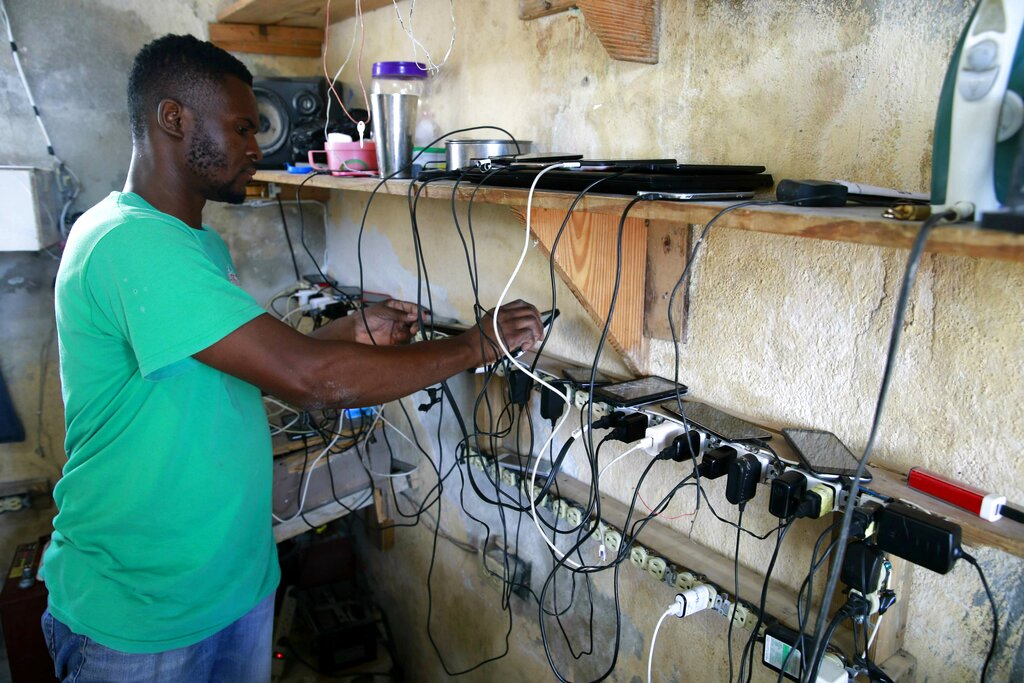 (Photo: In this April 16, 2019 photo, Johny Legagneur charges phones for clients at his shop in Petion-Ville, Haiti. Johny uses an inverter and generator to charge laptops, smartphones and rechargeable bulbs for a fee. Haiti's Bureau of Monetization of Development Aid Programs, started to buy oil on the global market, but it has now said that it has run out of operating funds and stopped regularly delivering fuel needed by power station operators to keep the lights on. ( AP Photo/Dieu Nalio Chery)).

Now, much of Haiti's population enjoys electricity for just three hours a day.

Nighttime activity has ground to a halt as armed robbers hold up street merchants or break into people's homes in darkness. Gas stations have gone empty for days, making it nearly impossible for many Haitians to get to work, run errands or take their kids to school. Hospitals are forced to rely on backup generators.

"We can't find gas for our vehicles. Our clients can't come to us. Sales are down in every sector," said businessman Reginald Boulos, whose investment group runs major supermarkets and car dealerships.

The fuel crisis is helping push Haiti's economy dangerously close to recession. GDP growth in 2018 was 1.5% — less than half what the government expected. Economists say this year will likely be the same. Annual inflation has also reached an estimated 17%, while a gallon of gasoline sells on the black market for between $6 and $12. 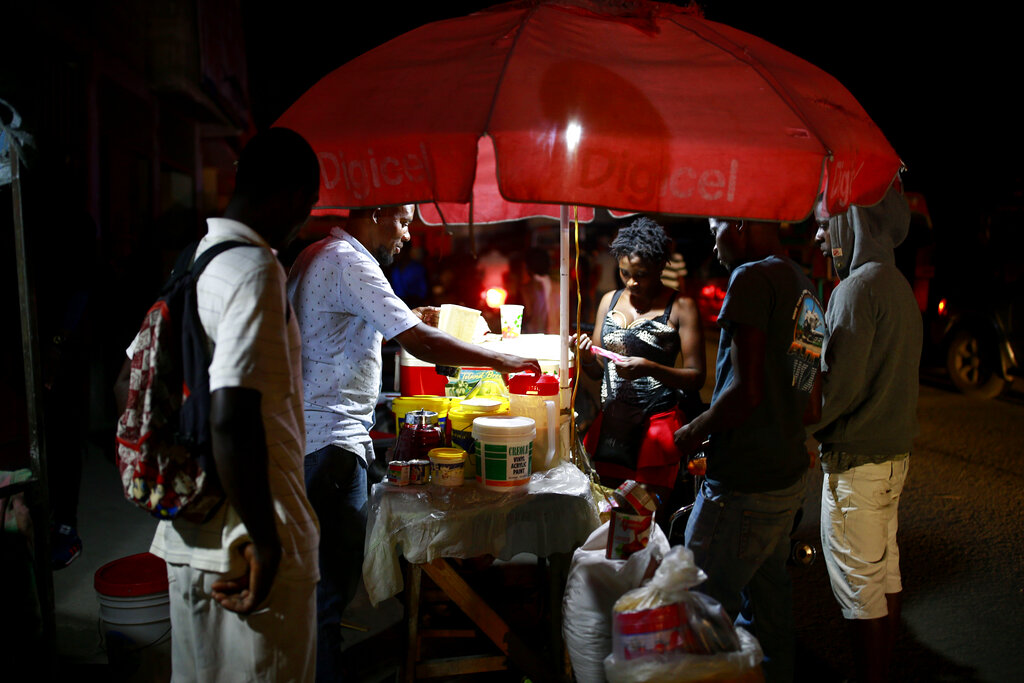 Fuel distributors are reimbursed by the state to the tune of about 27 cents for every subsidized gallon of gasoline sold to customers. That helps keep the price around $2.50 a gallon. But the cash-strapped Haitian state has gone months without paying subsidies and at one point owed some $71 million, leaving Haitian businesspeople to call for the end of the complicated state-oil purchase structure.

The path out is murky at best. When President Jovenel Moise tried to eliminate fuel subsidies on July 6 and raise prices of various petroleum products by 38% to 51%, protesters took to streets across the country calling for him to step down. The decision was quickly reversed, and the International Monetary Fund has since offered the hemisphere's poorest nation a $96 million low-interest loan.

Protesters are also enraged by corruption. A Haitian senate investigation found that more than $2 billion in profits from the Petrocaribe program had been wasted or stolen, leading to a months-long citizen campaign calling for more probes and prosecutions.

"The shortages are creating panic. The economy is being damaged. The best approach is liberalizing the market and regulating it, to avoid these problems," said Maarten Boute, the CEO of Digicel, Haiti's largest mobile phone network provider.

Some other countries in the region have weathered the end of Petrocaribe far better. Jamaica is seeing record economic performance. Cuba, however, is suffering from food and fuel shortages, although not as grave as Haiti's.

Moise's administration has asked BMPAD, the finance ministry and private energy companies to suggest ways to further open up the petroleum market. But BMPAD's director, Fils Aimé Ignace St Fleur, says the agency will not give up its role overseeing the importation and wholesale pricing of petroleum in Haiti.

"The state reserves the right to intervene directly in the market," he said.

But in the district of Bourdon, Jean says her situation is becoming dire.

Jean says she can't find gas, the price of a taxi has doubled, and her children often strain their eyes to study in dim light.

"Without electricity," she says, "we're in a very difficult situation."