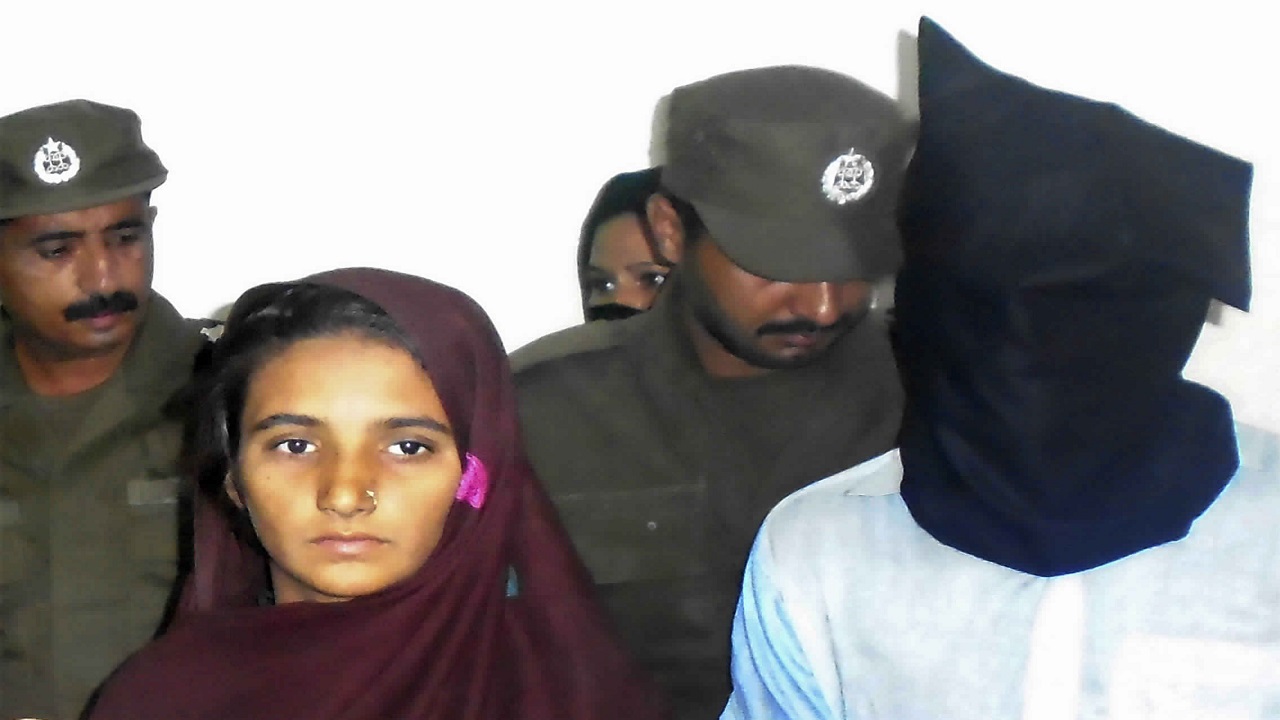 In this Monday, Oct. 30, 2017 photo, Aasia Bibi and her boyfriend, Shahid Lashari, are presented to journalists, at police station in Muzaffargarh in Pakistan. Pakistani police said Wednesday, Nov. 8, 2017, that they arrested a woman for allegedly plotting with Bibi, her newly married niece, to poison the 21-year-old woman's husband with tainted milk that would eventually kill him and 17 other relatives in a remote village.

Aasia Bibi had warned her parents time and again that if they forced her to marry her cousin, a man she disliked, she would be capable of going to any length to exit the union. She was already in a relationship, she said, and should be allowed to marry the man of her choice.

Now, investigators in this tiny, remote island village in central Pakistan believe the recently married 21-year-old was enticed by her boyfriend in a plot to kill her husband, Mohammad Amjad, by poisoning his milk with rat killer.

Amjad did not drink the milk, but his mother used the tainted liquid the following day to make a traditional yogurt drink that she then tragically served to 27 family members, including Amjad.

Amjad and 17 others were sickened and subsequently died at a district hospital, including eight children aged 7 to 12. Among the dead were Amjad's two brothers, his three sisters-in-law and some distant relatives.

"I repeatedly asked my parents not to marry me against my will as my religion, Islam, also allows me to choose the man of my choice for marriage but my parents rejected all of my pleas and they married me to a relative," Bibi told a judge at her initial hearing Oct. 31 following her arrest.

Aasia Bibi and her boyfriend Shahid Lashari were charged with murder and are scheduled to return to court Nov. 14. Pakistani police said Wednesday they also arrested Bibi's aunt, 49-year-old Zarina Begum, for her involvement in the alleged plot.

Local police chief Zulfiqar Ali said the deaths quickly drew the attention of police, who quietly began an investigation and were able to expose the plot. He said Aasia Bibi was among those who did not drink the traditional Lassi, which is made with water and yogurt.

"Her husband was in critical condition at a hospital and she looked as if nothing had happened and she was cool and calm at her home and it raised suspicions," he said.

Ali said police first arrested Lashari and he confessed to supplying the rat poison to his girlfriend. He said Lashari also told officers that Bibi's aunt, who used to arrange for the couple to meet at her home, was aware of the plot to kill Amjad.

Ali said that before detaining Aasia Bibi, police collected her cell phone data enabling investigators to surmise that she was in constant contact with Lashari after the attempted poisoning. He said Bibi confessed to her role in the killings upon seeing Lashari in hand-cuffs at a police station.

Relatives bringing condolences were still arriving in the dusty, isolated village on Tuesday when an AP reporter crossed the shallow Indus River to the island by boat. Sitting among the mourners on a cot in an open area, village elder Abdul Majid vowed to behead the newly married woman and her boyfriend if he got hold of them.

Majid said the couple, who were married in late July, deserved to be killed to restore the village's honor.

"If I see them, I will behead them with a wood saw," he said, as the jailed bride's father sat nearby.

Zohra Yousaf, a top human rights activist based in Karachi, said Aasia Bibi is among countless Pakistani women who are forced by their parents to marry against their wishes, but that it is rare for a wife to kill her husband. She said she believed Bibi's actions show that she suffers from depression and anxiety.

Many parents in Pakistan arrange marriages for their daughters against their will and nearly 1,000 Pakistani women are killed each year by close relatives in so-called "honor killings" for marrying against the family's consent or attempting to flee the forced unions.

According to a report released this year by the Human Rights Commission of Pakistan, "hundreds of women and girls were murdered in 2016 by family members on the pretext of defending the family honor." It is also common in Pakistan for village councils or elders to order killings or rapes in the name of honor.

In 2002, a village council ordered the gang rape of Mukhtar Mai, a young woman who later took her rapists to court. The case gathered international attention and she later opened a school for rural girls.

Sitting in her mud-brick home in this village of just 45 dwellings about 450 kilometers (270 miles) south of Multan, Bibi's mother Zakia Begum sobbed Tuesday night, saying she was wrong to force her daughter to marry a man she did not like.

She urged other Pakistani parents to give their daughters the right to marry the person of their choice.

"I feel guilty and I think we should have not forced our daughter to marry Amjad as she did not like him," she told The Associated Press.