Women's World Cup: How the 1999 team changed football in the USA 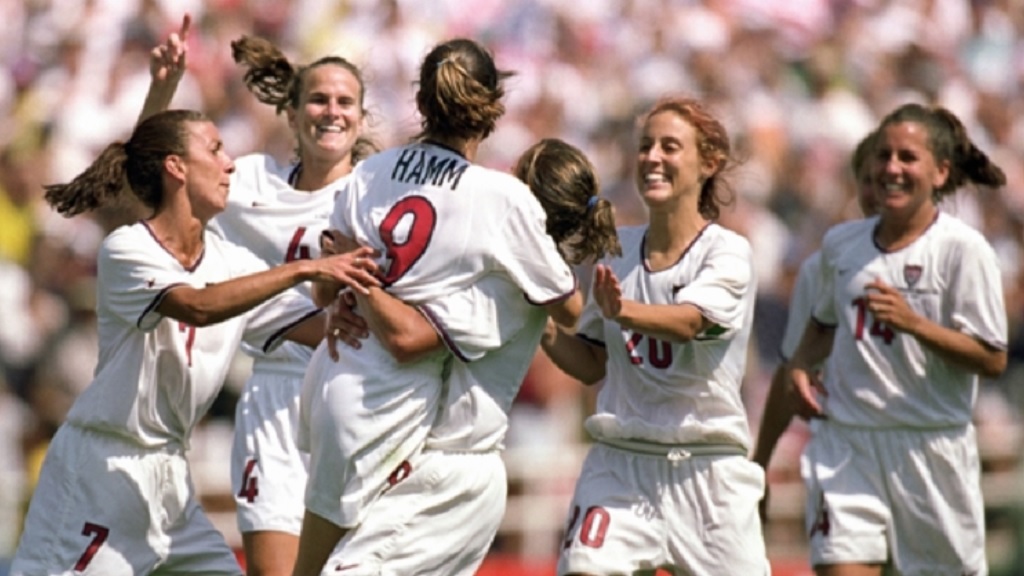 It has been 20 years since the most iconic moment in the history of football in the United States: the country's 1999 Women's World Cup win.

"It was a powerful year, to be honest," forward Kristine Lilly told Omnisport. "That '99 team was special and I don't think there was one reason why it was special.

"It was 20 unique individuals that had their own personalities and talent that came together as one team. You weren't playing for yourself. You were playing for the team. And ultimately, that's what created our success.

"But it was also during a time that soccer was growing and it really hadn't hit the forefront yet. Then the World Cup comes and we sell out our games and we win and lots of people watch it and it completely changed our society's views on women's soccer."

As the 2019 tournament starts on Friday in France, many of those now on the USA team point to the athletes who electrified the country 20 years ago as role models.

"The 99ers had a huge impact on me and growing my passion and wanting to play," star forward Alex Morgan told reporters at the team's World Cup media day. "Being good friends with a lot of them now, I still draw a lot of inspiration from them."

USA, who had won the first tournament in 1991, made it out of the first round on top of Group A, but it was not until the 3-2 quarter-final victory over Germany that Lilly believed they had a real shot at lifting the trophy again.

"Obviously, our goal was to win the World Cup and I think we knew we could do it if we played well and played together as a team and everyone did their job," Lilly said.

"We played Germany and we scored a goal and then went down one goal and then tied it up. We ended up winning that game and I thought, 'You know what, we are going to win this whole thing.'"

A 2-0 win over Brazil set up a final meeting with China.

"We knew China was good and that they were one of the stronger teams in the 90s," Lilly said. "And after playing them in the Olympics in '96, we knew they would be strong."

A record 90,185 fans packed the stands at the Rose Bowl and 40 million more tuned in around the world. President Bill Clinton was in attendance and Jennifer Lopez sang.

"It was nuts," Lilly recalled, the enormity of the moment hitting as USA walked out of the tunnel.

"You were looking into the crowd and there were all these people and you were just like, 'Holy cow'. It was just amazing and, to top it off, it was hot, like 100 degrees. And then we actually had to start playing the game."

"I remember thinking once the ref handed me the ball how amazingly quiet 90,000 people can be," defender Brandi Chastain told ESPN. "In those few seconds, all I could hear was myself breathe."

The final ended goalless, but Lilly was required to make a vital goal-line block in extra time to take the match to penalties.

"It happened so fast," she said. "There are so many moments like that throughout the whole tournament that adds to our success. That was just one moment that helped us stay alive."

The consensus among the USA team, Lilly said, was that they were going to win.

"That was our mentality going in and we found out who the PK kickers were going to be and then we were focusing on our shot and our kick," she said.

Goalkeeper Briana Scurry made a huge save from Liu Ying and the game came down to Mia Hamm and Chastain. Hamm converted, then it was Chastain's turn to step up.

"I remember watching the ball, seeing it spin with the logo and stitching - it was that slow, almost on pause," Chastain said. "And then it hit the net and the crowd erupted and it's back to real time and the team is running over piling on."

Chastain ripped off her shirt, swung it around in the air and then fell to her knees, screaming in pure happiness.

"It was just what happened, exactly how it happened, as I was feeling it," she said. "It was a spontaneous emotion. At a moment like that, your emotions completely take over and it's just raw reaction and feeling and sensation."

She added: "I hope that young girls that see that picture, see a little bit of themselves. They see strength and power. They see a lifelong journey. They see the willingness and the confidence that it takes to be seen."

Lilly said: "I wasn't even paying attention that she took off her shirt after she scored. We were all running toward her and coming over to congratulate her. It was complete euphoria."

Chastain's celebration was featured on the covers of Sports Illustrated, Newsweek and Time as she became an overnight celebrity.

"Women's soccer was not anonymous anymore," she said.

The conversation around women's football in the United States had changed forever.

"We were all really enthusiastic, but I'm not so sure we knew that it was going to cause this revolution," Chastain told CBS.

Lilly explained: "Going through it, I don't think we really understood what we were doing to the sport until after we won. We impacted people's lives."

Two decades later, the sport has evolved and the talent and depth of the USA team increases every year - in large part thanks to that group of athletes.

"They're great people that really shaped the history of this program and I'll be forever grateful for that," Morgan said, as USA - the 2015 champions - look to become only the second team to defend their title.