You are what you eat, especially if you're a pig 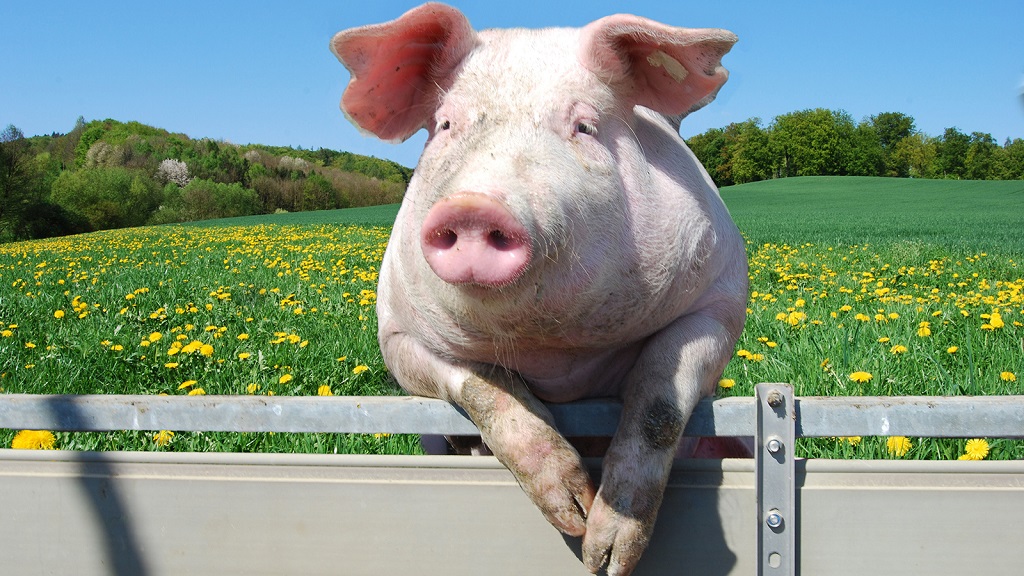 "Boy, you need to get yourself a hog."

That wasn't the advice Andrew Crush expected to hear when looking for a solution to his growing rattlesnake problem.

In 2004, Crush started a small family farm in Purcellville, Virginia, and noticed his goats were getting sick every time they went into the woods.

"Several of them had passed away and the veterinarian thought that those were probably due to rattlesnake bites," Crush said.

"And then we had some that were very sick and we had to do some IV antibiotics and all kinds of treatments to try to help them out."

Crush talked to animal control and other agricultural experts, but no one had any guidance, other than to spread moth balls throughout the property.

"And that wasn't really something I wanted to contaminate the land with," added Crush, owner of Spring House Farm.

So when a family friend told Crush that for pigs, snakes are "like a cupcake to a fat kid," he decided to give it a try. He purchased a heritage breed Hampshire pig and put him in the same wooded area the goats were clearing.

"That was probably in 2005 . and, to this day, we've never had another snake attack. It's worked well for us, and we get some bacon out of it as well."

In addition to getting rid of the poisonous snakes, Crush noticed something else: The meat from his hog was unlike anything he'd tasted — especially compared to pork from the grocery store.

"It's more of an earthy flavor," said Crush, who now has a thriving pig program with several dozen pigs on his farm.

Crush's pigs are raised on pasture until they reach about 100 pounds. Then, he moves them to the nearby mountain where they are free to forage for wild mushrooms, roots, and — yes — snakes.

"Most people will tell you that pork doesn't really have any flavor, except for whatever spices are put on it. That is correct in that sort of (conventional, factory farming) environment, but pigs themselves actually do have a lot of flavor, and it's the flavor of the product that they eat," said Crush, who sells his poultry, beef, goat and lamb through a CSA and in his new Hamilton, Virginia, farm store.

"They're one of the main animals that absorbs the flavor of the product that they eat more than any of the other ones out there."

Iberico ham is one example of this. The cured Spanish meat comes from the black Iberian pig. Similar to Crush's animals, these pigs are pasture raised and then fed a forager's diet of olives and acorns in their final days. The famous meat sells for about $87 a pound.

Chef Kyle Bailey has been buying pork from Crush since 2012, and he says the flavor is noticeably different from commodity pigs that are fed corn and soybean product.

He added, "The fat is nutty . and it's because they're eating acorns on the mountain."

David Ober of Cedarbrook Farm, near Harpers Ferry, West Virginia, sells his pasture-raised pork at the FRESHFARM Dupont Circle farmers market. His pigs are finished on apples — of which he has an abundance — before going to slaughter.

And that doesn't go unnoticed from his customers.

"I have heard from many of my customers that they detect an apple flavor in the pork when I've got a batch that have been fed a lot of apples," said Ober, who's been raising pigs since 2004.

"Like anything, you are what you eat, so I suspect that the taste of the pork is going to taste of what they were fed . and we give them free access to hundreds of pounds of apples."

Chef Erik Foxx-Nettnin of Magnolia's at the Mill in Loudoun County, Virginia, buys meat from Crush and other local farmers, and says the way the pigs are raised, in addition to what they eat, impacts the final product.

"What makes a big difference is that the animals aren't stressed out. They're relaxed, and that really comes through in the flavor of the meat," Foxx-Nettnin said.

Compared to conventional pork, he said, "This stuff is just good with salt and pepper."