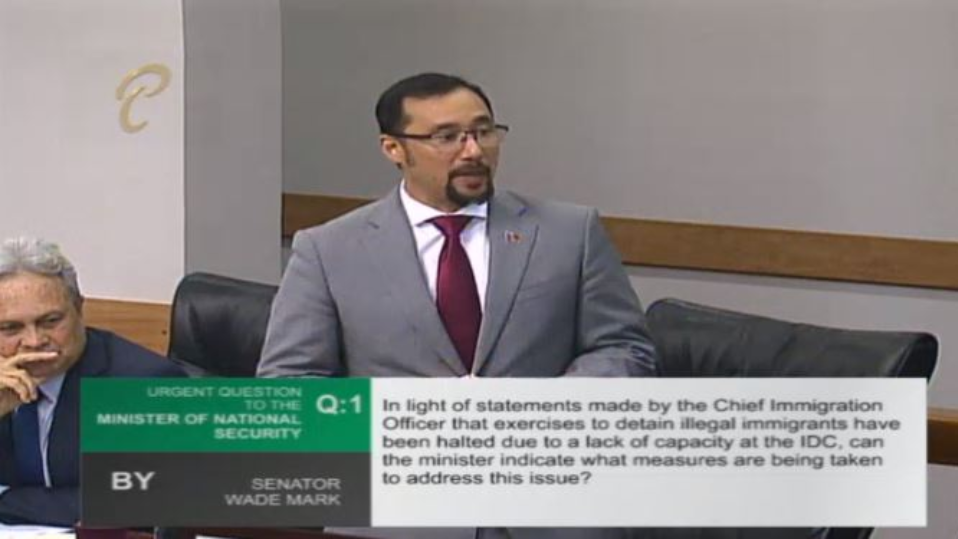 There is enough room to house illegal immigrants who are detained by law enforcement in Trinidad and Tobago.

This sentiment was expressed by National Security Minister Stuart Young who was speaking in the Senate on Tuesday.

Young was responding to the urgent question posed to him by Opposition Senator Wade Mark.

Mark raised concerns about statements made by the Chief Immigration Officer during a Joint Select Committee in which he said that exercises to detain illegal immigrants have been halted due to a lack of available capacity at the Immigration Detention Centre (IDC). The Opposition Senator questioned what steps are being put in place to address the issue.

In response, the National Security Minister denied that Trinidad and Tobago has an immigration crisis. He said persons who have overstayed their time or illegally entered the country are still being detained. Young added that the Government is seeking to expand the capacity that is allowed at the IDC by declaring a warehouse previously purchased by the UNC as a location for illegal aliens.

"We continue to detain illegal immigrants. In fact, up to yesterday (Monday) I believe there were 20 illegal immigrants detained and as I have indicated in that statement from the Ministry of National Security, there is an Inter-Agency Task Force set up which includes the Prison Service of Trinidad and Tobago and we are looking at utilizing some of the empty prison facilities. For example, that prison facility... the warehouse that was purchased under the former administration for hundreds of millions of dollars that wasn’t sufficient to be a full-scale prison, we’re looking at utilizing that now for the detention of illegal immigrants."

Young admitted that the Immigration Detention Centre is packed but noted that the warehouse will be made ready soon.

"What I can say is the Immigration Detention Centre is very close to capacity in terms of the number of people that it can hold so if that is what the Chief Immigration Officer was referring to, that there is a capacity issue, yes, there is a capacity issue. As I have said and as I have indicated, we are currently dealing with that situation by utilizing other facilities. So, for example, right now illegal immigrants who were picked up yesterday will be housed at police stations and these types of things and there is a process that they will have to go through before final determination."