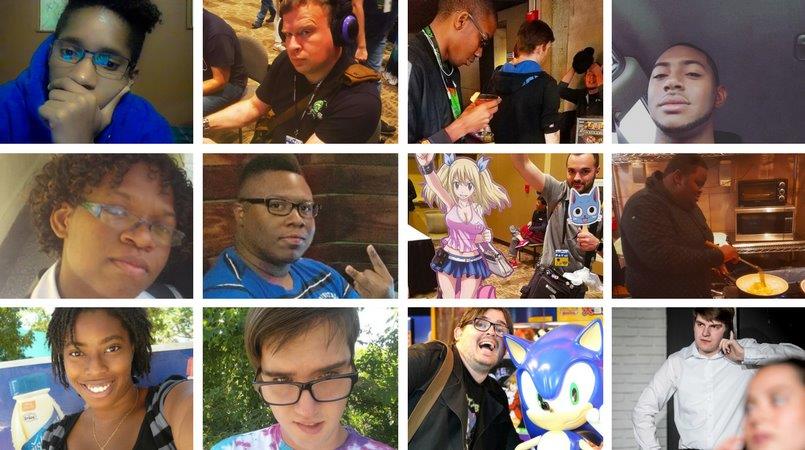 At age 27, not many people would assume that Qudduws Campbell owns not one, but two businesses, one of which takes him around the world to see some of the world’s biggest tech and game conventions.

As editor-in-chief of www.thebuttonsmashers.com and director of Aclass Tutors, an online teaching website, Campbell seems to take it all in stride, however.

The Buttonsmashers, a website which covers news about games, manga, anime and more, is one of the premiere global websites for gaming and manga fans, and the team has visited several major gaming conventions including PAX West, Gamescom, E3 and many more.

The computer engineering major says the idea for The Buttonsmashers began while still in university, mainly out of his passion for gaming and manga.

“Our site wasn’t originally supposed to be a news site. I didn’t have any expertise in journalism, it wasn’t something I was passionate about before this site, I guess you could say it happened randomly,” he said.

He said his passion for games led friends to suggest that he start podcasting in order to share his knowledge.

“I have a passion for games and stuff of nerd culture, comic books, manga etc, I used to watch as teenager and it was something I would do for fun on my days off.”

“I would meet up with friends and we would sit and talk about games we were playing etc. and my friends said ‘you’re really knowledgeable about this stuff and I was like ‘isn’t everyone?’,” he laughed.

He said he then met Shinelle ‘Kitami’ Prescott, who he describes as a ‘hard-core gamer’, and the pair started a series of podcasts called Button Smashers.

“She’s a hard-core gamer, most people who know me wouldn’t say I’m a hard-core gamer, I’m more of a utility gamer, I play more out of necessity. I don’t usually interact with other people, but Kitami is the exact opposite, she’s one of the best gamers I know. And after meeting her, I asked her and my expectation was that she would say no, but she didn’t she said yes, and so began our podcasting,” he said.

Soon, however, the duo realised that storage space for the podcasts became an issue, so the site moved over to Wordpress and they began to host more content.

“When Gametrailers was around they used to have a couple blogs and I used to write for them, but then they removed the blog and the stuff I wrote there was deleted.”

“I started writing the same blogs on the Wordpress website, I guess you could say it was a sort of diary for me, I would write about whatever was in my head, it varied from music I was listening to or software I was playing, and I thought it was creative and fun so I continued doing it and other people thought it was too, so they continued following it, and other people started asking if they could write for the site too,” he said.

As the site’s list of contributing writers began to grow, so did the website’s traffic.

He said he met the next member of his team while guest-speaking on another podcast in the US.

“We did this sort of cross-promotion where we did their podcast and they guest starred on ours, and their cohost Zach became a friend of mine. We ended up collaborating, and Zach offered to write on the blog as well,” he said.

Campbell said he continued to have guest speakers, many of them from around the world, including Belgium, the UK and various parts of the US, and the offers to produce content continued to grow. 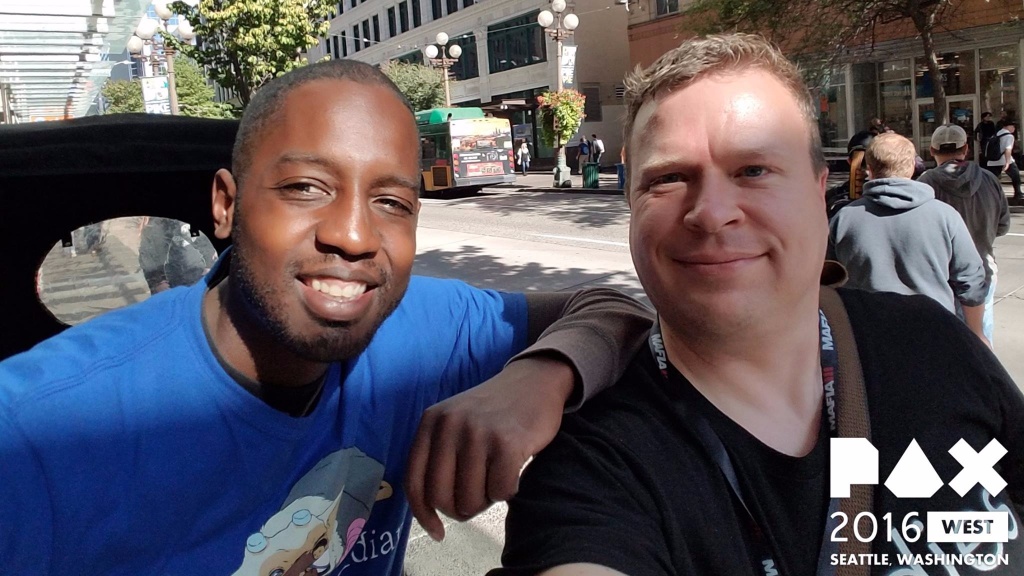 (Photo: Members of The Buttonsmashers team at PAX West 2016 in Seattle, US)

“Eventually we started to say ‘wow we’re getting a lot of traffic’. We started realising that we were ranking pretty high (alongside other major gaming news sites).”

The team also began reporting on local gaming events which were a huge success.

“Over time we got to a point where we were invited to events. I attended a FIFA tournament and later was invited to do a podcast and I said we weren’t accustomed to podcasting at an event but I said I would attend and write about it,” he said.

Campbell said he was then asked to speak at the event in a last-minute change, which turned out to be a great success.

Because of their limited budget, the team then began reaching out to international gaming companies, developers and manga publishers for offers which they could review.

The team then decided to rebrand their site, and their present domain, thebuttonsmashers.com, was born. 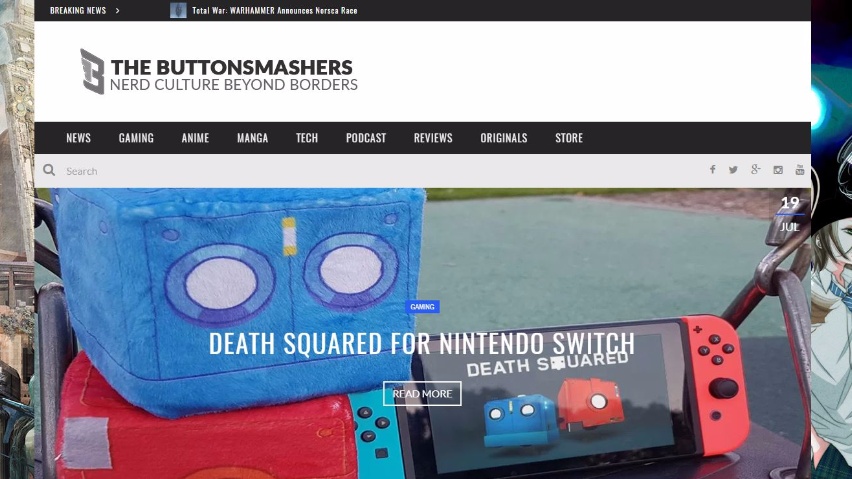 Campbell said the team began to get a lot of feedback almost instantly, as well as advertising offers.

“At the time we weren’t considering ads at the time so we ignored them. One day I was checking emails and realised we had an email from a publisher. They’re the biggest manga publisher in the US right now, they publish manga in the US and recently South America.”

He said since then they began receiving tons of content which they posted on their behalf.

He said around that time he contacted the publisher and began receiving their latest issues.

“It was amazing, we started reading them and writing and after that we began to get contacts from other publishers and got into the gaming publishing industry as well."

The team then received accreditation for the worldwide gaming event PAX Prime (now called PAX West), around three years ago in Seattle.

Campbell said the team has attended that event ever since.

They have also attended Gamescom in Cologne, Germany, which is considered by many to be the biggest gaming event in the world, in 2016.

“PAX is big but Gamescom is huge, it’s held in Cologne, and it’s a lot of people. It was amazing,” he said.

They have also been accredited for the Electronic Entertainment Expo (E3) twice, in 2016 and 2017 and also attended Anime North 2015 and 2016 in Toronto, Canada.

The site now has over 500,000 visitors per month and works various publishers and developers in the industry, including VIZ Media, Yen Press, Kodansha, Crucial, LucidSound, NIS America, SEGA, and many others. 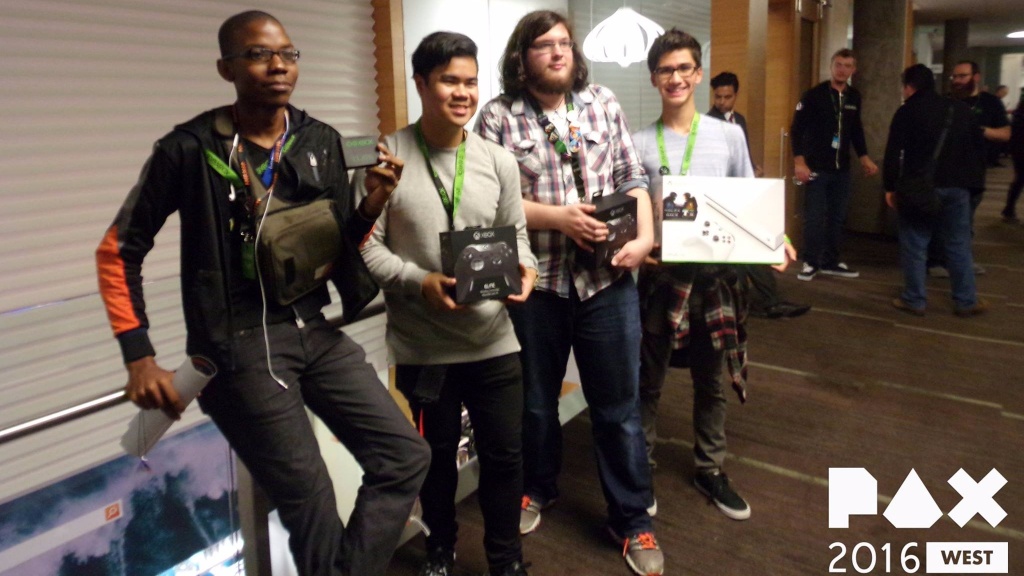 (Photo: Members of The Buttonsmashers team at PAX West 2016 in Seattle, US)

The team’s present success was not without its challenges, however.

Campbell said some of the biggest challenges involved managing his global team, not to mention the competition they face from other global news sites.

“As a software engineer you just learn to troubleshoot as you go along, I had errors like everyone else.”

“I think the biggest challenge for me is managing a large group of people. At one point we had 25 people and managing 25 people with different language barriers and so on, it was a challenge,” he said.

Nevertheless, he said he’s proud of everything the team has accomplished.

“When we started off we were a podcast, we were a blog, and over the past five years we’ve built ourselves into a website that is recognised by gaming events around the world.”

“We’re recognised by pretty much every gaming publisher, anytime they have something that comes out we have it, so to me that’s a big accomplishment, as well as the fact that we’ve overcome a lot of hurdles. It was stressful but we overcame it as a team and as individuals,” he said.

Campbell said he thinks it strange, and a little sad, that although their website is recognised by the gaming industry worldwide, in Trinidad and Tobago the site is not nearly as well known.

But nevertheless, he said the site will continue to grow, tackling all things ‘nerd culture’.

“I think the next step is to continue growing. We’re in a niche market, we’re more tailored to specific content, what people call ‘nerd culture’, that is, gaming, technology, etc. and as a result we do have certain limitations as to what we can achieve.”

Campbell said there have been requests for more video content, which the team is working on.

“As the founder of the website I would have loved that T&T was one of our biggest markets. T&T is ranked in the top 20, but to think that that’s where the website is from but they’re only in the top 20 and not the top 5, it’s like ‘really?’”

“The only time we get top traffic is if we’ve got a really big event on or if we cover something specific to Trinidad. I think our biggest markets are the US, Canada, Russia, and France. There are a lot of countries ahead of Trinidad and Tobago in our traffic,” he said.

Not one, but two businesses

It might seem hard to believe, but Campbell is also the owner of an online teaching website which he began with his sister and another close friend, which he started while in university.

“It got me thinking that I should just start our own private school with my sister, and we actually had an office in Curepe for a couple months, but the kids couldn’t really make the classes because of the hours.”

He said they actually built an online platform, called Aclass Tutors, with teaching sessions for students.

“Our students signed onto the internet and used the online platform wherever they are, it’s one of my most profitable businesses,” he said.

Campbell also had some simple but profound advice to offer other would-be business owners.

“There’s a quote from (motivational speaker) Les Brown. He asked a question, what is the richest place in the world?”

“He said it’s actually the graveyard, because there are a lot of people with great ideas that could have made them billionaires, but they never put it into action.”

“I’ve learned that if you have a good idea, even if you don’t think it’s going to work out or you’re not sure how it’s going to happen, start something, start doing something towards it.”

“People are going to say you should just do the nine-to-five and not bother, but a lot of the newest millionaires in the world are self-made, they had ideas and decided to act upon it. Look at Facebook, a lot of Youtubers, make millions of dollars off of their videos.”

“If you have a good idea and you think you can execute it, do it, go towards it and try as hard as you can,” he said.

He added that he’s also willing to invest in other great ideas.

His next tip? Diversification.

“I’m not one to saturate myself in just one business, my mom would say never put all your eggs in one basket."

“That’s basically what I’ve done and it’s worked out pretty well for me,” he said.