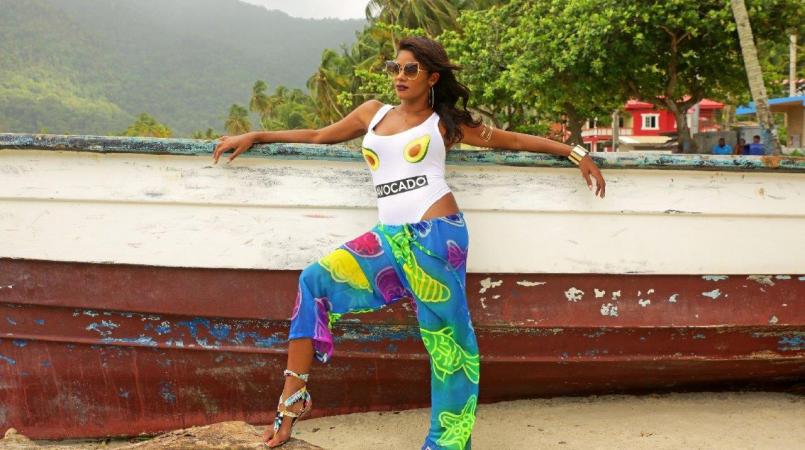 You may know Stef Kalloo as a recording artiste, with tracks like Pretty Pretty and Dan It Up remix, but she’s now added designer to her portfolio.

Inspired by her own self-proclaimed hippy, island style, Stef has launched her own line of print skirts and footwear, Weju Wear (pronounced way-you). “Although everyone pronounces it “way-joo”, I’ve gotten accustomed,” Stef said with a laugh.

Her line comprises of beautifully patterned skirts and interchangeable lace-up sandals which give customers two looks with one pair of flats.

Wearing one of her own skirts during the interview, Stef’s look encapsulated what it means to be island glam. She indicated that she wanted to start her own line for some time. In addition to creating looks that patterned after her style, she also noticed that there was no local market for the sandals she makes.

“I wanted to start my own line, and I noticed we don’t really market much here for certain items…. interchangeable sandals was one of them. I don’t really like to wear heels, and I also fractured my feet twice so I wanted to be stylish in flats.”

She found a distributor out of Mexico who customizes prints and went to work. Sewing each skirt herself, Stef indicated that she's still learning when it comes to stitching, and it made us recall Anya Ayoung-Chee on her stint on Project Runway, who admitted as much but consistently produced amazing designs at each challenge. Stef's own pieces are wonderfully crafted with little indication that she's a novice in the fashion game.

“I am so involved in everything. I do my own music proposals, my own storyboards for music videos. I like to be involved in anything I’m putting out. I feel like no one else can get me when it comes to the skirts and the designs, so I want to be hands on. I know after a while I won’t have time to sew everything but at least it will be my own way of putting things together.”

Although Weju Wear has been in existence for a little under a year, the brand has already gained a lot of traction with local celebs such as Patrice Roberts rocking one of her signature sandals as well as the girlfriend of Kevin Wild of Bad Royale. That recognition helped to put Weju Wear on the map and demand grew. "I started getting all these notifications and I realized my inbox was full with all of these orders, I had to go back and order another batch of sandals!"

She indicated that she plans to have her pieces displayed at fashion shows eventually but her main goal is to create have enough pieces for a full collection. This means eventually producing pants and even tops. While she's gained a lot of attention in the lead-up to and during the Carnival season, she's insistent that she doesn't want her pieces to be limited to seasons.

"The whole idea is to bring that whole Caribbean island vibe year round. Even if you're not from the Caribbean, I want you to feel like an islander."

Her entrepreneurial spirit is already an inspiration to younger generations. As one of several local celebs to take part in the Decibel School Tour, Stef explained that she's had a number of students ask her advice on getting into design.

"When they see the sandals, some of them want to be designers, they'd ask me directly or come on my page and ask questions about how to do it all."

She said that she'll also be on one of the panels for the upcoming Decibel Entertainment Expo, where she'll further interact with students to discuss her career and line. She even hinted that she may be providing wardrobe for one of the invited international celebrities, which by most accounts, is a huge opportunity for visibility for a new designer.

In spite of the success of her clothing brand, Stef's music is still priority so even though things are steadily picking up with Weju Wear, she' s still recording and performing, indicating that new music is coming within the next few months. She also has several appearances coming up including Borders Festival, as well as a show of her own.

As a singer, dancer and now designer, Stef is definitely a triple threat of skill and talent.