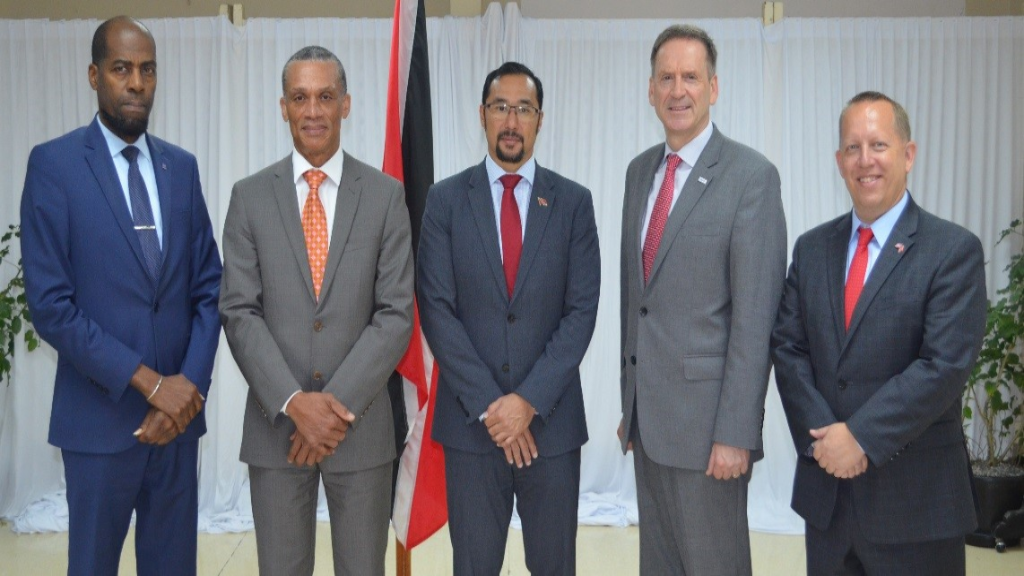 As the political crisis in Venezuela continues, Trinidad and Tobago remains firm in its position of non-interference in the affairs of the South American nation.

The issue was high on the agenda during a courtesy call from United States Agency for International Development (USAID) Administrator Mark Green and other USAID officials, to National Security Minister Stuart Young on Friday.

The USAID Administrator was presented to the Minister by Chargé d’Affaires at the Embassy of the United States of America in Trinidad and Tobago, John McIntyre.

Minister of Foreign and CARICOM Affairs Dennis Moses and Permanent Secretary of the Ministry of National Security Vel Lewis were also present at the meeting.

Minister Young welcomed the USAID team noting that the meeting was an opportunity to renew the Government’s commitment to the longstanding bilateral relationship with the United States of America.

Administrator Green thanked Minister Young for his warm welcome and indicated that the USAID team looked forward to the continued working relationship with Trinidad and Tobago on current bilateral engagement projects as well as regional security initiatives.

The current situation in Venezuela was a topic of discussion, with Minister Young reiterating Government’s position of non-interference and non-intervention in the internal affairs of Venezuela.

He noted that this country will continue to hope for a peaceful resolution process through dialogue.

Minister Young also informed Administrator Green of the upcoming Migration Registration Process for Venezuelan nationals in Trinidad and Tobago during a two-week period which is expected to commence on May 31 and conclude on June 14.

Discussions also focused on security matters of mutual interest and other areas for further collaboration. Both parties pledged to continue working together.

The United States Agency for International Development (USAID) leads the U.S. Government's international development and disaster assistance through partnerships and investments that save lives, reduce poverty, strengthen democratic governance, and help people emerge from humanitarian crises and progress beyond assistance.