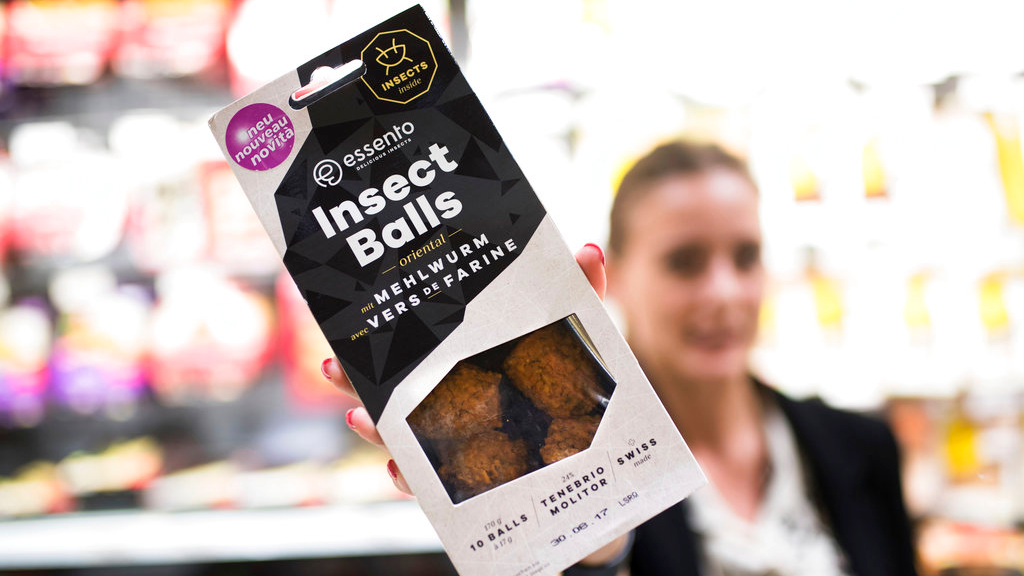 A Coop employee shows a packet of insect balls in Lugano, Switzerland. Swiss supermarket chain Coop, to a bit of hoopla, began selling “burgers” and “balls” made from insects. It’s billed as a first in Europe, a continent more accustomed to steak, sausage, poultry and fish as a source of protein rather than bugs that can be found in places like Africa or Asia

Swallow deeply, pinch the nose and repeat the mantra: "Tastes like beef, tastes likes beef." Then bite into the burger of rice, chopped vegetables, spices and mealworm larvae.

The Swiss supermarket chain Coop, to a bit of domestic hoopla, has begun selling burgers and balls made from insects. It's being billed as a legal first in Europe, a continent more accustomed to steak, sausage, poultry and fish as a source of protein.

The goal is to convince leery consumers to try a nutritious, if unusual food that "preserves the planet's resources," Coop says.

About one-third of the burger is mealworm larvae. A burger weighing 100 grams (3.5 ounces) has about 10 grams of protein in it — about the same amount found in a child's-size beef burger.

For now, only seven of Coop's nearly 2,500 stores in Switzerland are serving up the critters concocted by the Zurich-based food start-up Essento. The chain says the insect products have been flying off shelves during their limited rollout in the Alpine nation and a broader launch is planned by year's end.

Insect promoters say Switzerland isn't the first European country to allow retail sales, just the first to have those sales so clearly authorized. A change in Swiss law in May allows the sale of three types of insects: mealworm larvae, house crickets and migratory locusts.

"It's the first time that a state has authorized human consumption of insects in such a firm, explicit way in Europe," said Christophe Derrien, chief of the International Platform of Insects for Food and Feed.

Insects can be found on the shelves in Belgium, Britain, Denmark and the Netherlands, but that's due to a "legal void" in European Union rules, he said.

New legislation taking effect in January will smooth the way for bug burgers to turn up on picnic plates across the EU, however.

The chain says it has a policy of not releasing sales numbers, but spokeswoman Andrea Bergmann said the insect burgers and balls "have been very successful from day one and have been sold out quickly everywhere."

The burger itself has little white specks of rice inside with traces of carrot, paprika, chili powder and pepper. After a hesitant bite, the main flavors that come out are the spices. The texture is curious, a bit like a meaty falafel with a crunch. An aftertaste lingered — but maybe that was just my subconscious playing tricks.

The insect burgers, like the meat variety, can be accompanied by buns, tomatoes and lettuce. The insect balls — a mixture of mealworms with cilantro, onions and chickpeas — seem to fit best in pita bread, perhaps with a spoonful of yogurt.

The U.N.'s Food and Agricultural Organization has promoted insects as a source of human food, saying they are healthy and high in protein and minerals. The agency says many types of insects produce less greenhouse gases and ammonia than most livestock — such as methane-spewing cattle — and require less land and money to cultivate.

Still, there's no telling how long a true conversion in consumer tastes from beef to bug burgers might take — if it happens at all.