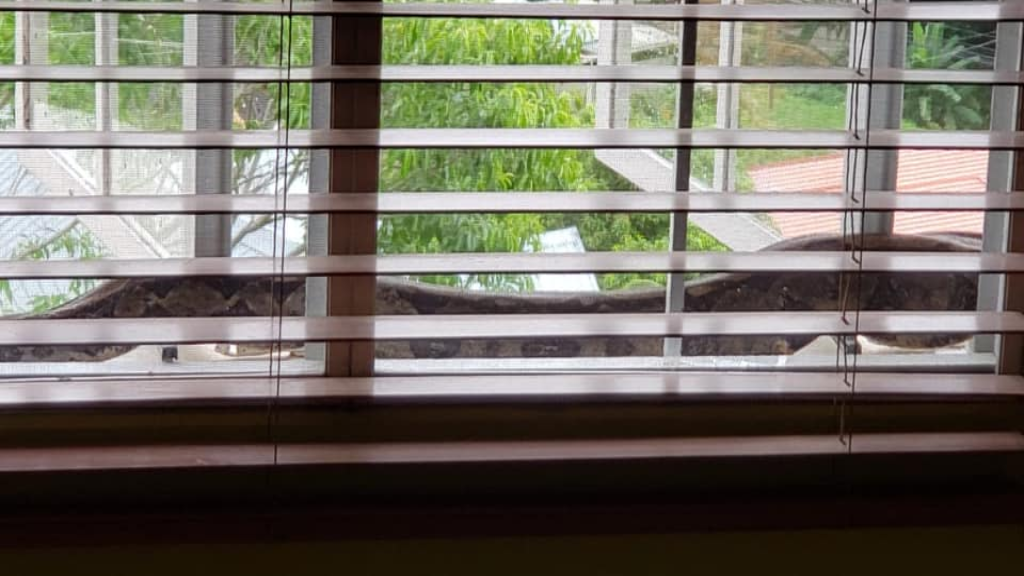 With the onslaught of heavy rains associated with the rainy season, the public is being reminded that snakes and other wildlife will find their way into more comfortable accommodations, including homes.

The reminder comes from Agriculture Minister Clarence Rambharat after a Cascade resident took a look outside and discovered a massive macajuel (boa constrictor) lounging in his window.

Rambharat, in a Facebook post on Monday, said snake sightings are a common occurrence following heavy rains as the slithering creatures are in search of warmth to regulate their internal temperature.

He thanked the Cascade homeowner for contacting the Emperor Valley Zoo to safely remove the macajuel, perched 40 feet up on a window ledge.

The Minister urged the public to do the same and contact the Zoo via its hotline 800-4ZOO for any wildlife that needs to be removed.

The Emperor Valley Zoo on the occasion on World Snake Day in July advised the public against killing snakes if they are encountered after heavy rains. Instead, citizens are advised to contact the zoo’s rescue hotline so that the snakes can be rescued and relocated, and in some cases, rehabilitated.

“Snakes play an important role in the country’s ecosystem and should therefore be rescued and relocated as opposed to any lethal action,” the Zoo stressed.

According to the Zoo, rehabilitation includes dipping the snakes in a cypertic mixture to remove any external parasites, feeding if the snake is in need of a meal, and a vet check up to ensure that the snake is in optimal health for release.

The Zoo noted that calls have increased in the past few months to retrieve and relocate local species of snakes.

Four macajuels, the largest of which measured 10 feet long were retrieved by the Zoo in July.

At maturity, the non-venomous species of snake can measure up to 13 feet long, and weigh in excess of 100 pounds, with females being larger than males.

Despite being excellent swimmers, Boa constrictors ted to spend their time on dry land.

During the rainy season, their homes are sometimes washed away by flood waters, causing them to leave their natural habitat in search of dry land and find their way into backyards and houses.