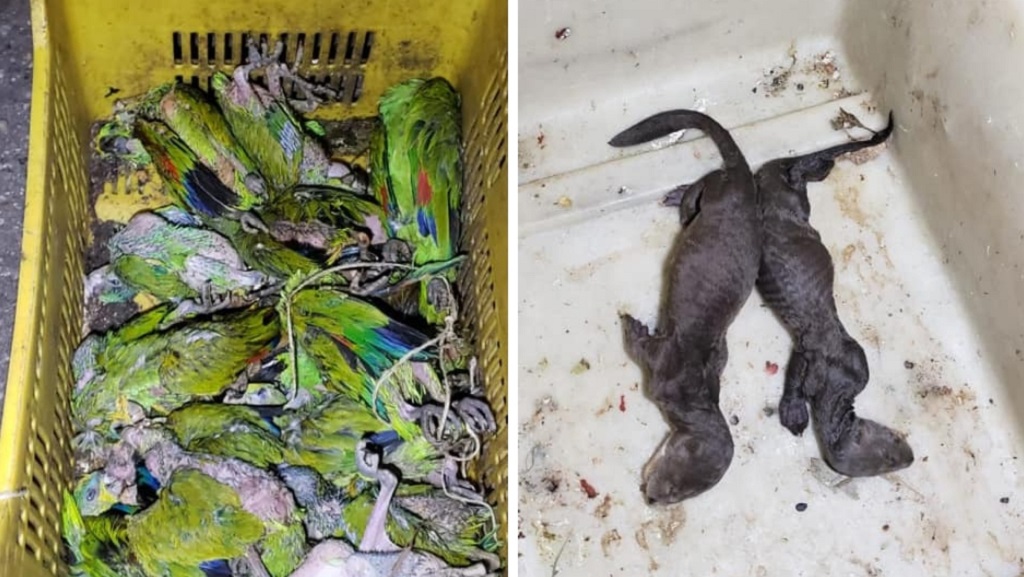 Photo via Ministry of Agriculture, Land and Fisheries, Clarence Rambharat/Facebook.

Trapped in containers and trafficked to Trinidad, over 43 yellow crown parrots and four river otters, were found dead by wildlife officials.

Two Diego Martin men have been held in connection with the seizure, according to a social media post by Minister of Agriculture, Land and Fisheries, Clarence Rambharat.

Rambharat said the remaining animals which were still alive had to be taken for special treatment.

"43 dead yellow crown parrots. This is how cruel wildlife trafficking is. Parrots, Giant River Otters, Monkeys, all heading to buyers that live among us."

"In such crude conditions these animals are severely malnourished, potentially diseased, lack food and water and are distressed."

Rambharat said the men were held in separate vehicles by Santa Flora police.

Rambharat said officials from the Emperor Valley Zoo went to Santa Flora to rescue the animals which were still alive in order to try to save them.

"We intervened in time for the Emperor Valley Zoo to go to Santa Flora and rescue and begin stabilizing and saving as many of the animals as possible."

"In this condition the animals require round the clock food, medication and care and this is underway. Thanks to the Santa Flora Police; Game Warden Steve Seepersad and the staff at the Emperor Valley Zoo."