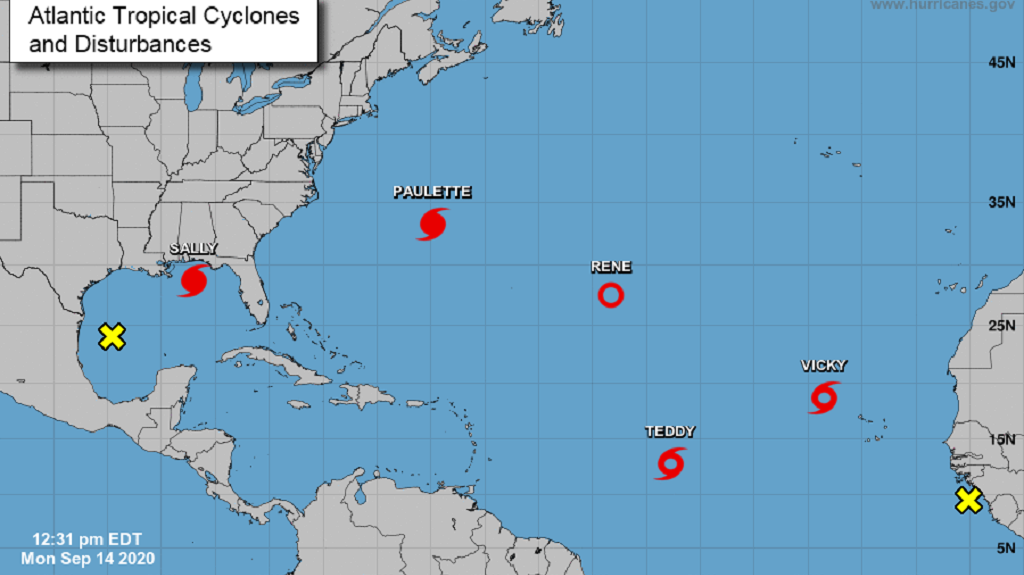 Photo: Seven systems including two hurricanes and two tropical storms are being monitored by weather agencies as of September 14, 2020. Photo courtesy the US National Hurricane Center.

The Atlantic hurricane season is swirling with weather systems, including two hurricanes and two tropical storms. 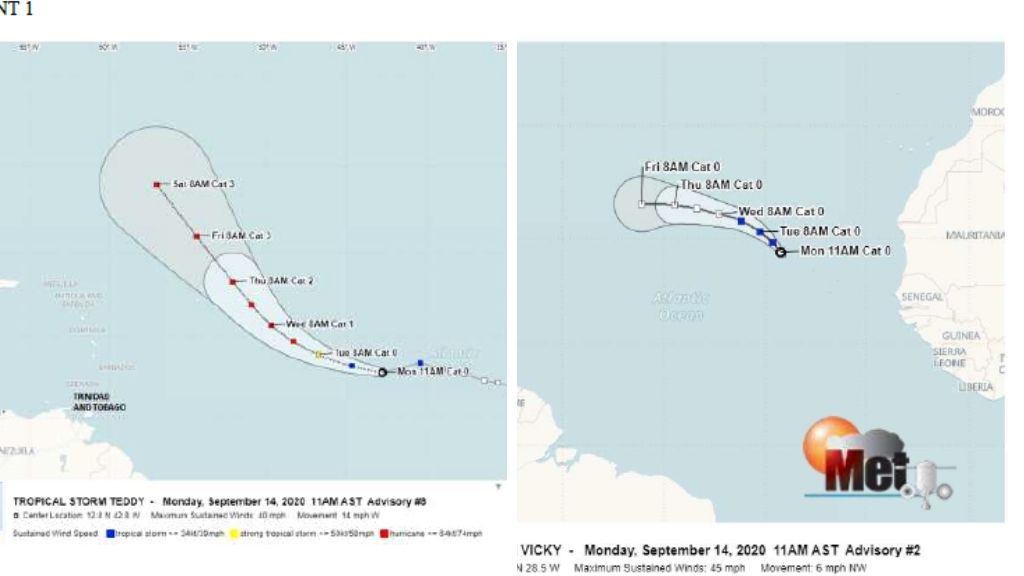 The Met Office said Tropical Storm Teddy is not expected to make landfall on the Eastern Caribbean, but it is expected to rapidly intensify into a powerful hurricane within the next few days and generate large swells which are expected to reach the Lesser Antilles as well as the north-eastern coast of south America by midweek.

'Vicky is a minimal Tropical Storm which is expected to weaken by Tuesday night. At this time, Tropical Storm Vicky poses NO threat to the Eastern Caribbean.'

The Met Office said it will continue to closely monitor these systems and will issue an update only if the situation warrants.

Meanwhile, two hurricanes, Paulette and Sally, are also in motion.

The US National Hurricane Center said as of Monday morning, Sally was located near latitude 28.7 North, longitude 87.0 West. Sally is moving toward the west-northwest near 7 mph (11 km/h). 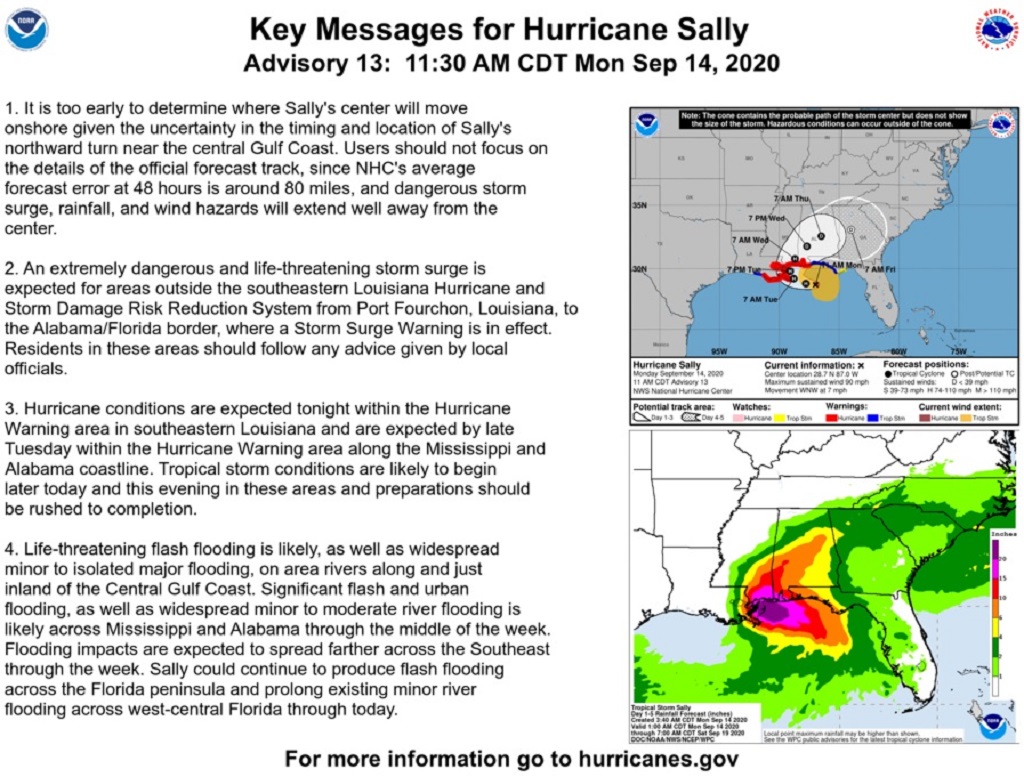 This general motion is expected to continue today, followed by a decrease in forward speed and a turn toward the northwest tonight and a northward turn sometime on Tuesday.

On the forecast track, the center of Sally will move over the north-central Gulf of Mexico today, approach southeastern Louisiana tonight, and make landfall in the hurricane warning area on Tuesday or Tuesday night.

Afterward, Sally is expected to move slowly north-northeastward near the northern Gulf Coast through Wednesday.

Data from NOAA and Air Force Reserve Hurricane Hunter aircraft indicate that Sally has rapidly strengthened. The maximum sustained winds are near 90 mph (150 km/h) with higher gusts.  Additional strengthening is forecast during the next day or so.

The NHC said the center of Hurricane Paulette was located near latitude 33.2 North, longitude 64.8 West after passing over Bermuda on Monday morning.

Paulette is moving toward the north near 14 mph (22 km/h), and this general motion should continue into this afternoon. 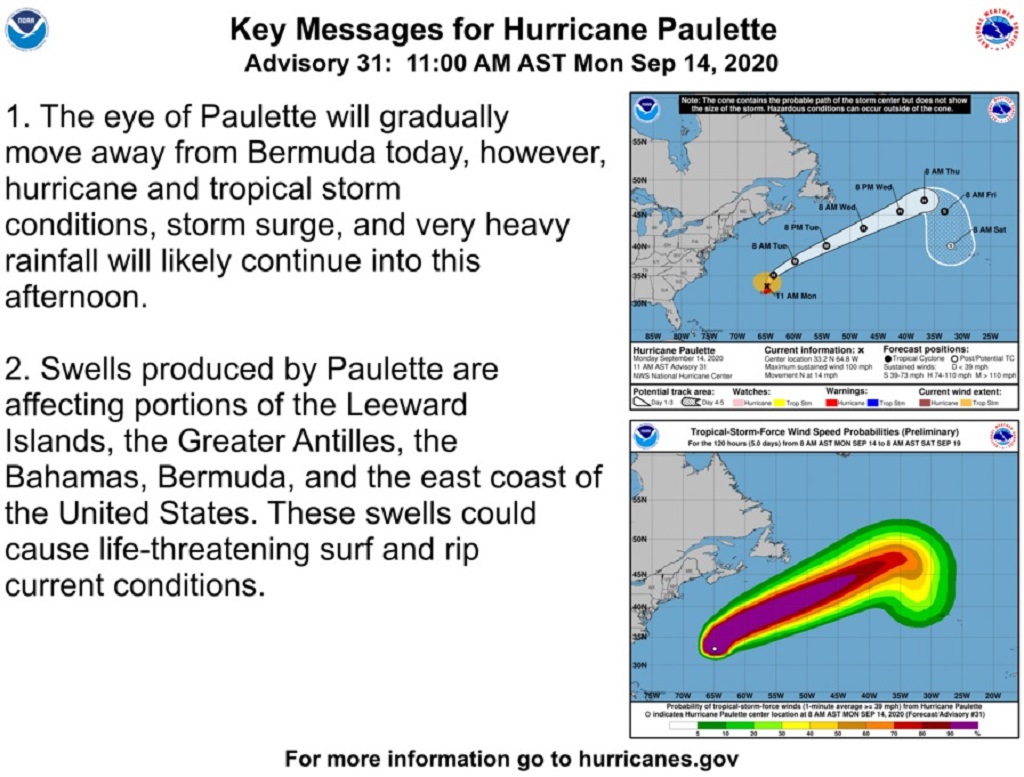 Maximum sustained winds are near 100 mph (155 km/h) with higher gusts.  Additional strengthening through Tuesday night is likely  as Paulette acclerates northeastward to east-northeastward. Gradual weakening is forecast to begin on Wednesday.

La Niña is here; what it is and how it will impact hurricane season