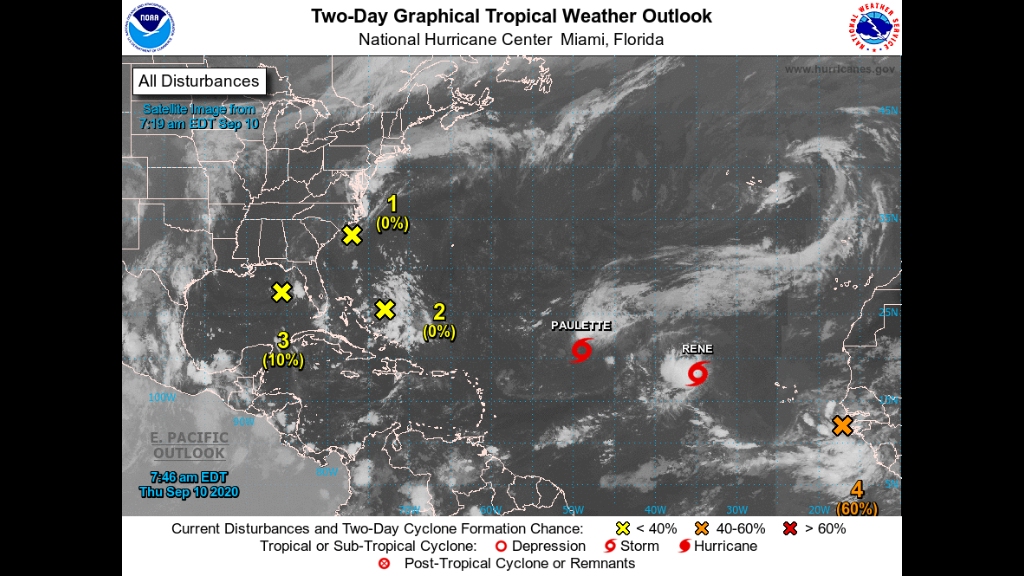 Six areas of concern are being monitored by the US National Hurricane Centre (NHC) as the 2020 Atlantic Hurricane season reaches its statistical peak day (September 10).

The first areas of concern is Tropical Storm Rene, which is located about 730 miles (1175 km) west-northwest of the Cape Verde Islands.

Rene is moving toward the west-northwest near 10 mph (17 km/h).  This general motion is expected to continue for a couple of days, followed by a turn toward the northwest.

The storm has maximum sustained winds that are near 40 mph (65 km/h) with higher gusts. 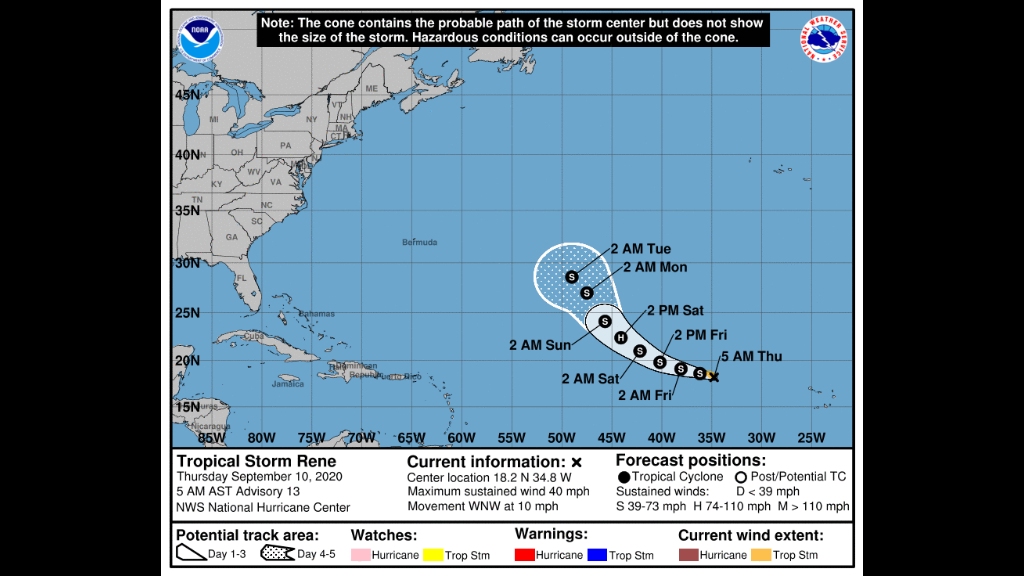 Tropical-storm-force winds extend outward up to 70 miles (110 km) from the centre. Gradual strengthening is forecast to take place during the next 48 hours, and Rene is expected to be near hurricane strength by Friday night.

The NHC is advising persons with interest in Bermuda to monitor Tropical Storm Paulette.

Paulette is moving toward the west-northwest near 10 mph (17 km/h) and this general motion is expected to continue through Friday. A north-westward motion should begin Friday evening and continue into the weekend.

The storm has maximum sustained winds that are near 60 mph (95 km/h) with higher gusts. Tropical-storm-force winds extend outward up to 205 miles (335 km) from the centre. 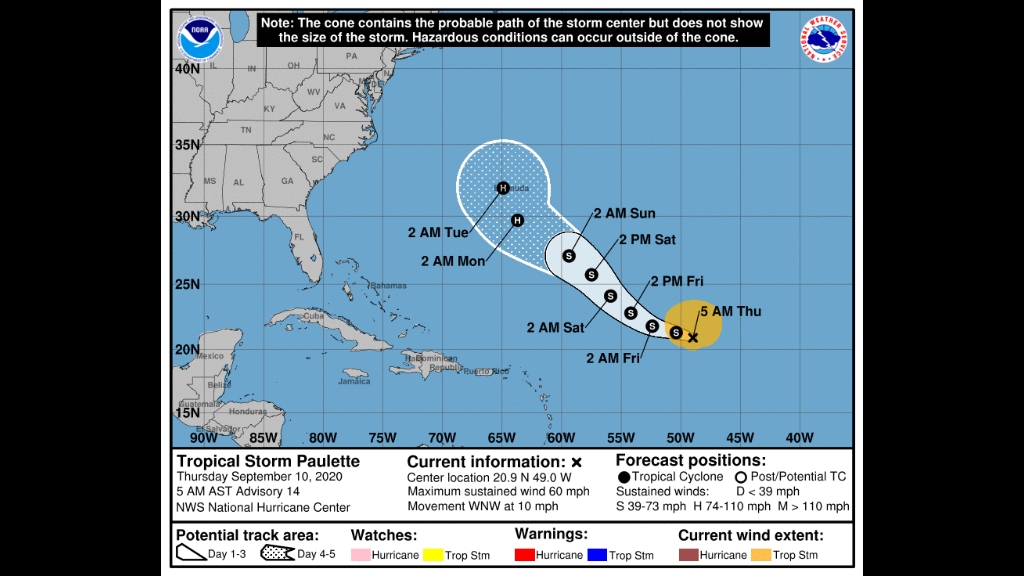 Some weakening is forecast to take place during the next couple of days, with strengthening commencing during the weekend.

Swells generated by Paulette are expected to reach portions of the Leeward Islands Thursday night and Friday and will continue to spread westward to portions of the Greater Antilles, Bahamas and Bermuda into the weekend.

These swells are likely to cause life-threatening surf and rip current conditions.

This system is forecast to move westward, crossing the Bahamas and Florida on Friday and moving into the eastern Gulf of Mexico over the weekend.

Upper-level winds are expected to become conducive for some development of this system while it moves slowly west-north-westward over the eastern Gulf of Mexico early next week. It has a low (30 percent) chance of formation during the next five days.

There is a trough of low pressure located just off the coast of North Carolina. The trough is producing minimal shower and thunderstorm activity.

This system is expected to move inland over eastern North Carolina this afternoon and therefore no significant development is expected.

Another trough of low pressure has developed over the north-eastern Gulf of Mexico and is producing a few disorganised showers and thunderstorms.

Some slow development of this system is possible while this system moves westward and then south-westward over the northern and western Gulf of Mexico through early next week. It has a low (20 per cent) chance of formation during the next five days.

A tropical wave is now moving off the west coast of Africa, producing a large area of showers and thunderstorms.  Gradual development of this system is forecast, and a tropical depression is expected to form by this weekend or early next week while the system moves generally westward across the eastern and central tropical Atlantic. It has a high (90 per cent) chance of formation during the next five days.

Another tropical wave is forecast to emerge off the west coast of Africa this weekend.

Environmental conditions are expected to be conducive for development, and a tropical depression could form over the far eastern tropical Atlantic Ocean early next week while the system moves slowly westward. It has a medium (40 per cent) chance of formation during the next five days.