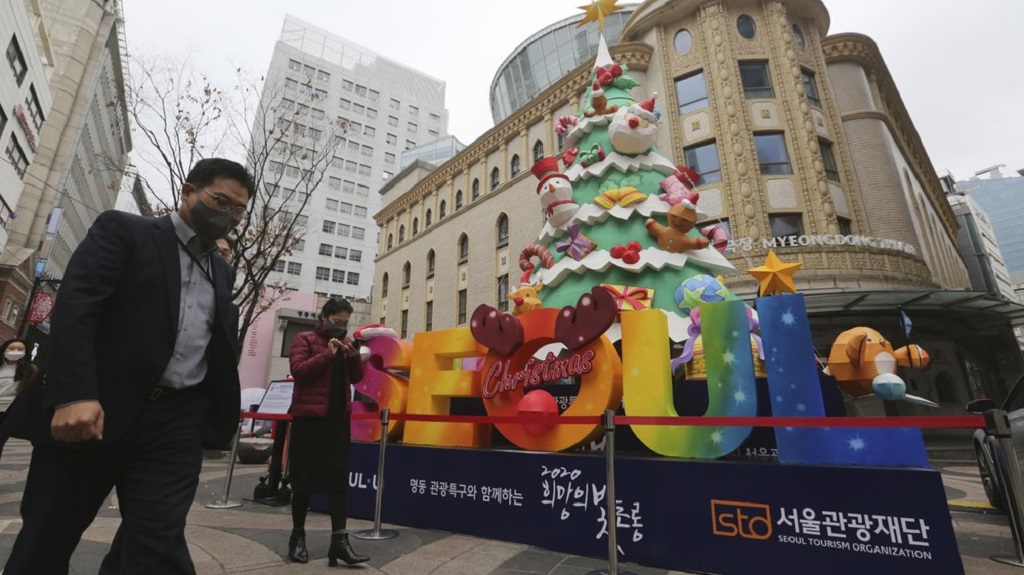 People wearing face masks to help protect against the spread of the coronavirus walk past a Christmas tree set up for a year-end festival featuring a lantern at a shopping street in Seoul, South Korea, Friday, Nov. 20, 2020. South Korea's prime minister has urged the public to avoid social gatherings and stay at home as much as possible as the country registered more than 300 new virus cases for a third consecutive day. (AP Photo/Ahn Young-joon)

The daily tally of confirmed coronavirus cases in Japan hit a record for the fourth straight day at 2,508, the Health Ministry said Sunday.

Japan has had fewer than 2,000 coronavirus-related deaths so far, avoiding the toll of harder hit nations. But fears are growing about another surge. A flurry of criticism from opposition legislators and the public has slammed the government for being too slow in halting its "GoTo" tourism campaign, which encouraged travel and dining out with discounts.

Prime Minister Yoshihide Suga on Saturday scrapped the campaign, but only after many people had already made travel reservations for a three-day Thanksgiving weekend in Japan.

Airports and restaurants have been packed. Some say the government should have offered to pay for cancellations, or stepped up PCR testing instead, if the goal is to keep the economy going amid a pandemic. Tutorials are circulating online on the proper way to eat and drink at restaurants while wearing masks.

— South Korea says it will impose stricter social distancing rules in the greater Seoul area to fight a coronavirus resurgence, as the country registered more than 300 new cases for the fifth straight day. Health Minister Park Neung-hoo said Sunday that authorities have found 62 virus clusters in the past two weeks. He said the toughened distancing guidelines in the Seoul area will be enforced for two weeks starting Tuesday.

Under the rules, nightclubs and other high-risk entertainment facilities must shut down and late-night dining at restaurants will be banned.

Customers aren't allowed to drink or eat inside coffee shops, internet cafes and fitness centers, while audiences at sports events will be limited to 10 per cent of the stadium's capacity.

— India registered 45,209 new cases amid a festival season surge in the capital and many other parts of the country. At least three states — Rajasthan, Madhya Pradesh and Gujarat — have imposed night curfews in many cities. The Health Ministry on Sunday also registered 501 deaths in the past 24 hours, taking total fatalities up to 133,227.

— Authorities in Sri Lanka said more than 600 coronavirus cases have been detected from the country's highly congested prisons as infections surge in the capital and its suburbs.

A total of 652 cases have been detected at five prisons in the island nation, including 609 inmates and 43 prison officers. Sri Lankan prisons are highly congested, with more than 26,000 inmates crowded in facilities with a total capacity of 10,000.

Sri Lanka has seen a fresh outbreak of the virus since last month, when two clusters — one centered at a garment factory and the other at a fish market — emerged in the capital, Colombo, and its suburbs. There have been 16,251 confirmed cases from the two clusters. Sri Lanka has had a total of 19,771 cases, including 83 fatalities.

— South Australia and Victoria states eased COVID-19 restrictions Sunday as Australia heads into summer in a better position to fight the virus. Victoria, which was hardest hit, has gone 23 days without a new infection.

In response, Premier Daniel Andrews announced a number of changes to restrictions. Mask-wearing outdoors, which until now has been mandatory, is no longer required where social distancing is possible. Masks will still have to be worn indoors and carried at all times.

Residents of South Australia emerged from a state-wide lockdown at midnight Saturday, and are now able to visit bars and restaurants in groups of up to 10 and host gatherings up of to 50 people with social distancing.

— Authorities are conducting mass testing and shutting down schools after China reported three new domestically transmitted cases in the past 24 hours — two in northern Inner Mongolia province and one in Shanghai.

The city of Manzhouli, in Inner Mongolia, will start testing all its residents on Sunday, a day after the two cases were discovered.

The city has suspended classes and shut public venues, telling residents to not gather for dinner banquets. Local authorities in Shanghai found one more case Saturday after testing 15,416 people following recent locally transmitted cases. The city is testing all residents in the Pudong New Area district.

China is already conducting mass testing for up to 3 million residents in the northern city of Tianjin after five cases were found there last week. The total number of confirmed cases in China is 86,431.

Biden faces tough choice of whether to back virus lockdowns