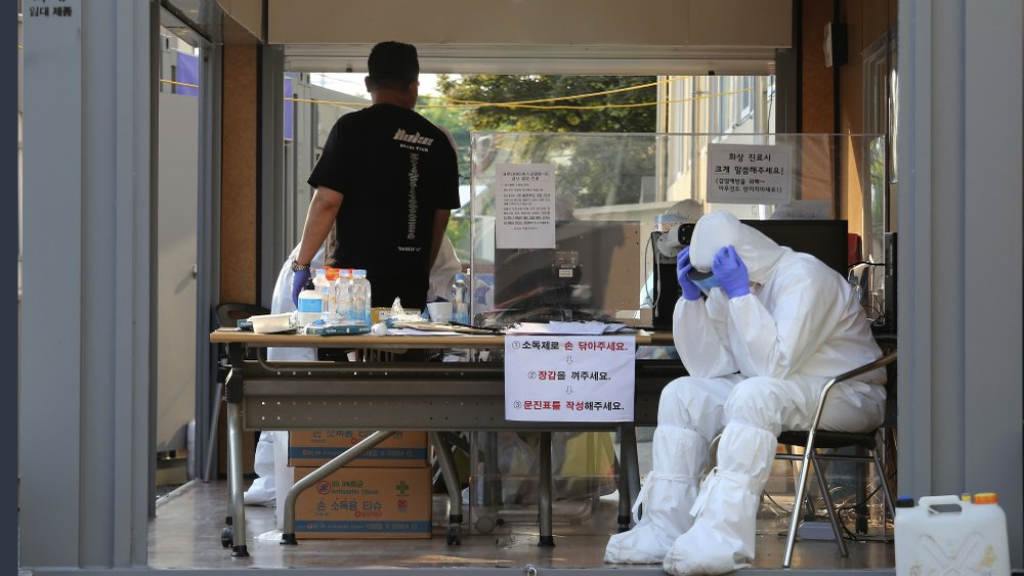 A health official wearing protective gear takes a rest during the COVID-19 testing at a public health center in Goyang, South Korea, Thursday, May 28, 2020. South Korea on Thursday reported its biggest jump in coronavirus cases in more than 50 days, a setback that could erase some of the hard-won gains that have made it a model for the rest of the world. (AP Photo/Ahn Young-joon)

South Korea on Thursday reported its biggest jump in coronavirus cases in more than 50 days, a resurgence that health officials warn is getting harder to track and risks erasing some of the nation's hard-won gains.

The Korea Centers for Disease Control and Prevention said 67 of the 79 new cases reported were from the Seoul metropolitan area, where about half of South Korea's 51 million people live.

Following an emergency meeting, the government decided to shut public facilities such as parks, museums and state-run theatres in the metropolitan area over the next two weeks to slow the spread of the virus.

Officials also advised private tutorial schools and computer gaming lounges in the area to close during the period or otherwise enforce anti-virus measures.

"The two weeks from now will be crucial in containing infections," said Health Minister Park Neung-hoo, who called for residents in the metropolitan area to avoid unnecessary gatherings and urged companies to keep sick employees off work.

At least 82 infections so far have been linked to workers at a massive warehouse operated by local e-commerce giant Coupang.

Health authorities plan to finish testing more than 4,000 workers and visitors to the warehouse later Thursday.

Hundreds of other infections have been linked to nightclubs and other entertainment venues, which saw huge crowds in early May after officials relaxed social distancing guidelines.

It remains to be seen whether the recent spike in infections force back a phased reopening of schools, which had been a major accomplishment in the nation's anti-virus campaign.

The Education Ministry on Wednesday said class openings were delayed at 561 schools nationwide because of virus concerns.

South Korea was reporting around 500 new cases per day in early March before managing to stabilize its outbreak with aggressive tracking and testing, which allowed officials to relax social distancing guidelines.

Seoul and nearby cities restored some of the controls in recent weeks by shutting thousands of bars, karaoke rooms and other entertainment venues to slow the spread of the virus.

Meanwhile, South Korea's central bank lowered its policy rate to an all-time low of 0.5 percent to soften the pandemic's shock to the country's trade-dependent economy.

The Bank of Korea also adjusted its annual growth outlook from a 2.1 percent expansion to a 0.2 percent contraction.

The country's economy hasn't seen an annual contraction since 1998.

In other developments around the Asia-Pacific region:

The Health Ministry also reported another 194 deaths, bringing the country total to 4,531. The country's top court, meanwhile, ordered authorities to provide free train rides and food and water to migrant workers returning to their villages after losing jobs because of the pandemic.

It also reported the country's death toll at nearly 1,500, the most fatalities in Southeast Asia.

Cases continue to increase even as the government prepares to relax restrictions gradually starting next week. Epidemiologists have warned that reopening the economy prematurely could trigger a second wave of infections.

The government, nevertheless, has insisted the country must be ready to get back to normal by the end of July.

— CHURCH CALLS FOR EQUALITY: A Catholic archbishop has accused an Australian state government of inequitable pandemic rules by allowing up to 50 people into pubs while limiting church congregations to 10.

Sydney Archbishop Anthony Fisher on Thursday encouraged Catholics to sign a petition calling on the New South Wales government to treat churches the same as pubs, restaurants and cafes.

New pandemic restrictions that take effect on June 1 increase the number of customers that such commercial premises can hold from 10 to 50. "We do not consider church attendance to be non-essential; indeed, nothing is more essential than the practice of our faith," the petition said.

No new deaths were reported and just 73 people remained in treatment, while another 518 remain under isolation and observation for either suspected of having the virus or testing positive without showing any symptoms.

— THAILAND WARNS ON JOBS: Thailand's state planning agency estimates that as many as 8.4 million people could end up unemployed this year due to the pandemic, with the tourism sector being worst affected.

A report Thursday by the National Economic and Social Development Council did not give current unemployment figures, but projected the cumulative 8.4 million lost jobs if the economy did not rebound.