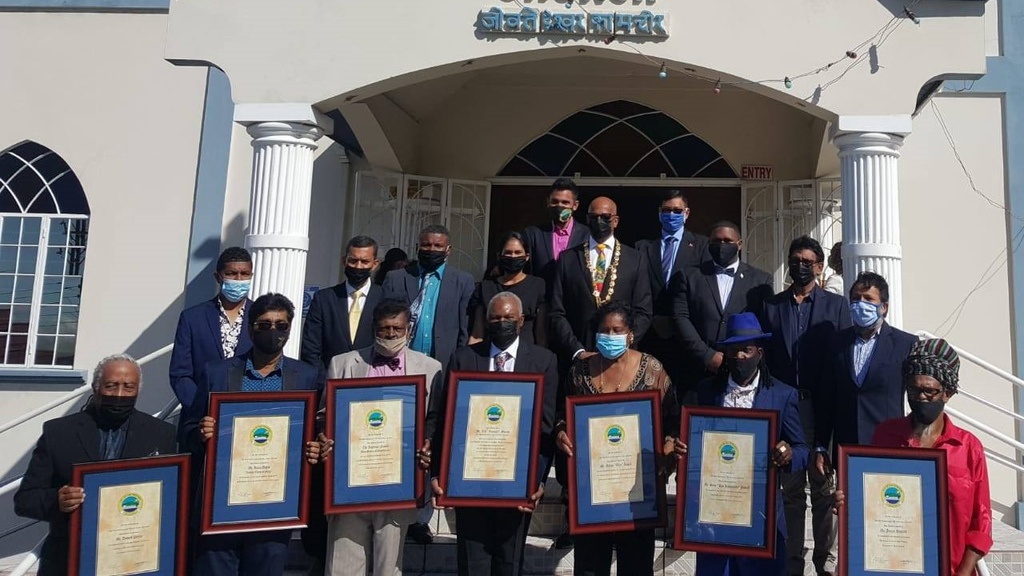 The City of San Fernando honoured those who contributed to arts and culture in the city during a church service on Sunday. Legendary arranger Len "Boogsie" Sharpe was among those honoured. Photo: courtesy Mayor Junia Regrello's Facebook page

Len "Boogsie" Sharpe has been made an honorary citizen of the City of San Fernando.

The acclaimed pan arranger was given the honour for his "immeasurable contribution as a composer, arranger and musician on our National Instrument, the Steelpan".

San Fernando Mayor Junia Regrello bestowed the honour on the Phase II arranger on Sunday at the 32nd-anniversary celebration of the City of San Fernando at the Susamachar Presbyterian Church.

This year is themed "The Year of the Arts" and is dedicated to the celebration of cultural icons and ambassadors who have helped to shape the landscape of San Fernando in arts, music, theatre and dance, and who have consistently represented San Fernando throughout the years.

In his speech, the Mayor noted that this year has seen the loss of cultural icons, who created and contoured the cultural identity of San Fernando, and they saw it fit to recognise others who continue to do the same.

The following people were honoured and presented with Citations from the City of San Fernando:

Milton “Wire” Austin for his contribution to the Steelpan

Steve “Ras Kommanda” Pascall, for his invaluable contribution towards the promotion of Soca and Calypso music.

Rana Mohip, for his musical excellence and unequaled talent in the promotion of Indian music and culture.

Lionel Jagessar, for his continued contribution to the careful creations of authentic American-Indian costumes.

Dawad Philip, for his patriotism as a writer, poet, and mas designer

Junior Bisnath, for his dedication in furthering the African art form of ‘Stilt Walking’ also known as ‘Moko Jumbies’.