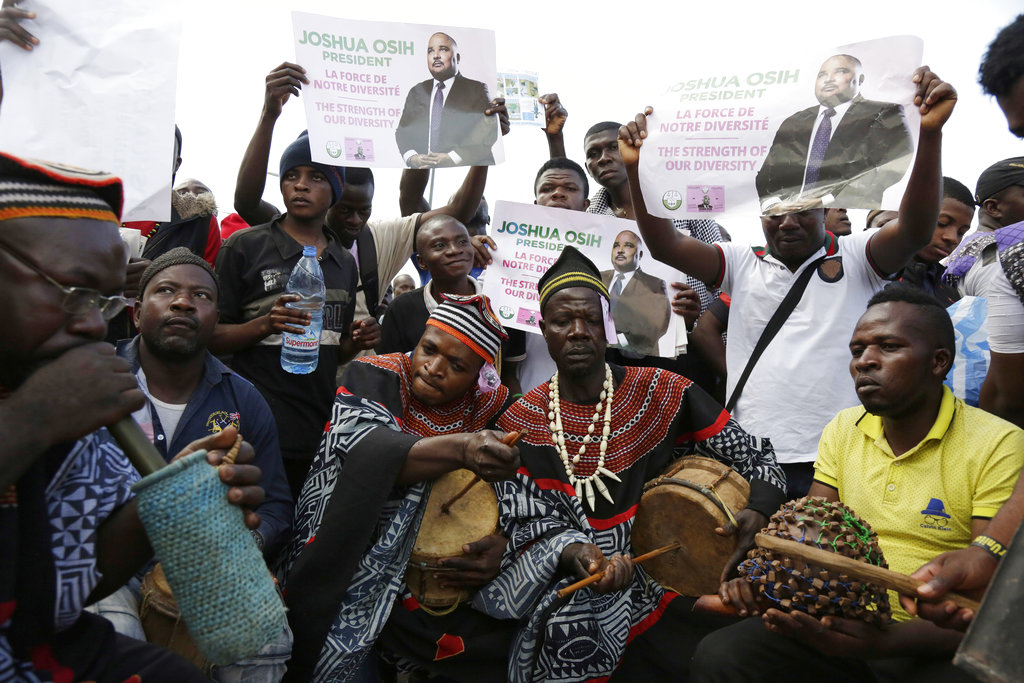 Polls opened Sunday in Cameroon as Africa's oldest leader is widely expected to win another term even as English-speaking separatists threaten to disrupt the election and many who have fled the unrest are unable to vote.

President Paul Biya has held office since 1982 and vows to end a crisis that has killed more than 400 people in the Central African nation's Southwest and Northwest territories in the past year. The fractured opposition has been unable to rally behind a strong challenger to the 85-year-old leader.

A victory likely would come with a weakened mandate for Biya as many residents of the troubled English-speaking Southwest and Northwest regions have fled elsewhere. By law, voters can only cast a ballot in the community where they are registered.

Voting day has already been marked by violence.

The military killed two armed men in the English-speaking northwest town of Bamenda, according to Governor Deben Tchoffo of the Northwest region.

"We shall not allow terrorists to disrupt the election," he said. "I salute the maturity of people who are braving the threats and carrying out their civic duties. We are informed that armed men are shooting indiscriminately to frighten voters, we shall not allow such a thing to happen."

Gun fighting between the military and separatists began Saturday in at least six towns and villages including Nkambe, Mamfe and Kumbo.

Several buildings have been burned, including residences where voting material is thought to have been stored.

"The wave of attacks will not deter us from doing our job," said Enow Abrams Egbe, chairman of ELECAM, the election commission.

Security has been increased and people should not be scared to vote, said Cameroon territorial administration minister Paul Atanga Nji.

All voters in the English-speaking regions go through screening, present voter's cards and identity cards before they are able to cast a ballot. Numbers were low at the start of the vote Sunday.

In the French-speaking regions, however, hundreds lined up early eager to vote.

"I have performed my civic duty. It indicates I am a true Cameroonian. I voted for Biya because he is the one who promised to improve the health care system," said Julienne Ngono, a voter at the Bastos primary school polling center where president Biya will vote.

More than 6.6 million people across Cameroon are registered to vote.

On Friday, opposition candidate Akere Muna withdrew from the race to support Maurice Kamto. However, despite attempts to remove his ballot papers the electoral chairman Egbe said: "We were informed late and we cannot withdraw them since we do not have the material means."

Campaign materials were also meant to be taken down before the vote, but posters of Biya still cover neighborhoods.

The Election Commission and government say they will make provisions for displaced voters, but many say they will not be able to vote amid threats by separatists. Cameroon also battles with Boko Haram extremists in its Far North, where more than more than 230,000 people have been displaced.

More than 200,000 people have been displaced because of violence by both separatists and the military in the English-speaking Northwest and Southwest regions, with many towns simply abandoned.

The ruling Cameroon Peoples Democratic Movement attempted to campaign normally in the affected regions, holding several rallies, but Biya did not appear. The party says at least eight of its officials have been abducted and some supporters attacked.

Election observers, including the African Union, have said they will not be carrying out their work in the troubled southwest and northwest because of the crisis.

What began as protests two years ago by teachers and lawyers in the English-speaking regions against what they called their marginalization by majority French speakers turned deadly after a government crackdown. The separatists emerged, cheered on by some in Cameroon's diaspora, including the United States.

Then fringe groups became violent, clashing with security forces that have been a close ally of the U.S. in regional counterterror efforts but face accusations of human rights abuses. Panicked civilians are caught in the middle.