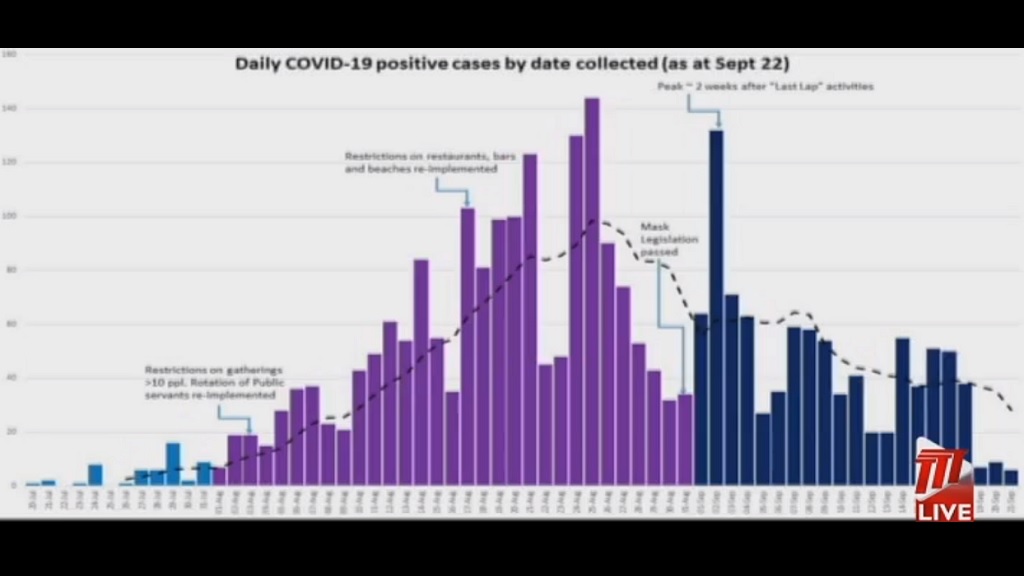 The Ministry of Health says the number of recorded COVID-19 cases is slowly declining.

Speaking at today’s Health Ministry briefing, epidemiologist Dr Avery Hinds said the pattern being seen over the past few months has been maintained and there is a slow decrease in numbers of new cases.

‘The pattern we have been seeing over the past couple of months has been maintained; we are now looking at a fairly consistent pattern of slow decrease in numbers of new cases turning up to be swabbed and testing positive.’

Showing the data accumulated and analysed thus far, Dr Hinds said it was projected that there would be a rapid increase in cases due to the behaviour of the public.

He also responded to questions on the initial surge demonstrated in the graph (in purple) which was some weeks after the August 10 general election.

Dr Hinds did not explicitly address general election campaigning but said that any events which encouraged gathering would provide an opportunity for the virus to spread:

‘I think its inaccurate to say we’re ignoring the first part of this graph. We have alluded to the steady upward incline and we have spoken on many occasions on movements and gatherings which exceeded and did not comply with the recommendations for reduced numbers.

‘All of those behaviours would contribute to the onward propagation and transmission of the virus which is demonstrated in the graph, the part described as having an upward trend.’

‘Whatever the source or cause of the movement in gatherings, the issue is once people move and people gather, then we’ll have opportunities for transmission. We projected that we would see a rapid increase in the numbers because of the behaviours prior to that. So saying that we have not spoken or addressed that part of the graph I don’t believe to be accurate.’

The Ministry announced two additional COVID-19 related deaths this morning; an elderly man and woman who both had co-morbidities (other health issues).

As of this morning 20 additional people tested positive for the virus, bringing the total number of active cases to 2,019.

Anyone who has developed symptoms of COVID-19, should call the hotline 877-WELL or 800-WELL (9355) for further guidance.

Anyone who is severely ill, should call the 811 (emergency hotline) or call ahead to the Accident and Emergency Department of the nearest hospital for help and go in immediately.