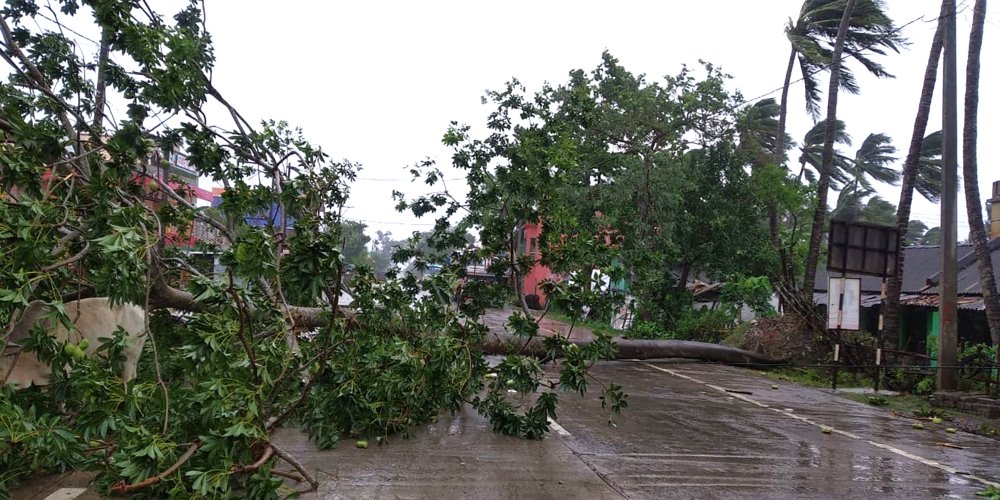 Trees lie uprooted on a highway from heavy winds ahead of Cyclone Amphan landfall, at Chandbali on the Bay of Bengal coast in Orissa, India, Wednesday, May 20, 2020. Cyclone Amphan is expected to make landfall on Wednesday afternoon, May 20, 2020, and forecasters are warning of extensive damage from high winds, heavy rainfall, tidal waves and some flooding in crowded cities like Kolkata. (AP Photo)

A powerful cyclone slammed ashore Wednesday along the coastline of India and Bangladesh, where more than 2.6 million people fled to shelters in a frantic evacuation made all the more challenging by the coronavirus pandemic.

Cyclone Amphan, the equivalent of a category-3 hurricane, was packing winds of up to 170 kilometres (105 miles) per hour and maximum gusts of 190 kph (118 mph). Authorities warned it could cause extensive damage to flimsy houses and a storm surge could push seawater 25 kilometres (15 miles) inland, flooding cities including Kolkata.

The densely populated region has some of the most vulnerable communities in South Asia: poor fishing communities in the Sunderbans and over a million Rohingya refugees living in crowded camps in Cox's Bazar in Bangladesh. 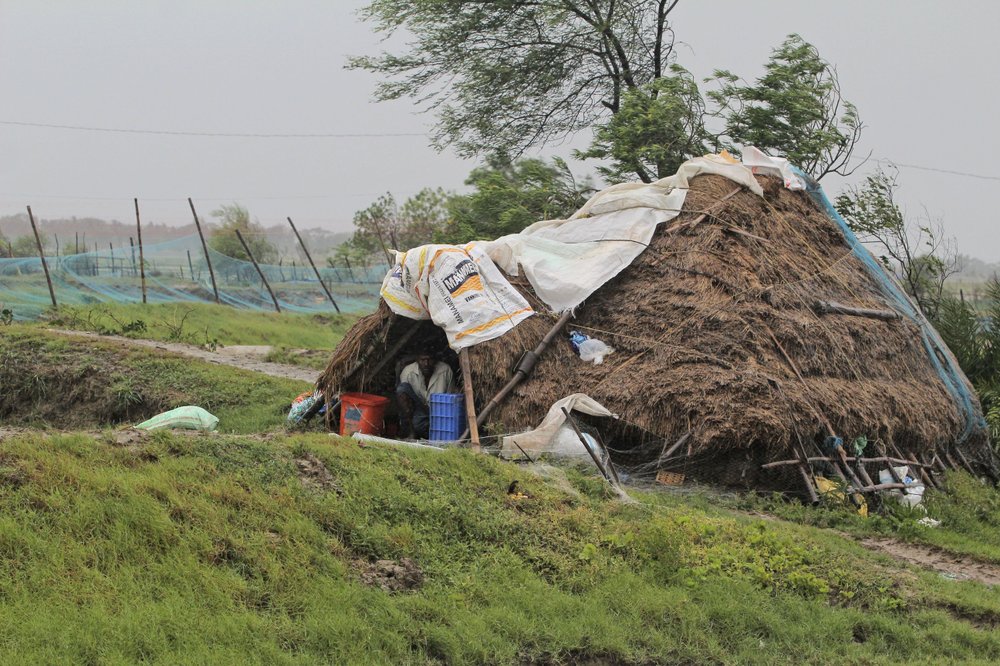 (Photo: A man takes shelter from the wind and rain inside a hut ahead of Cyclone Amphan landfall, at Bhadrak district, in the eastern Indian state of Orissa, Wednesday, May 20, 2020. A powerful cyclone is moving toward India and Bangladesh as authorities try to evacuate millions of people while maintaining social distancing. Cyclone Amphan is expected to make landfall on Wednesday afternoon, and forecasters are warning of extensive damage from high winds, heavy rainfall, tidal waves and some flooding in crowded cities like Kolkata. (AP Photo)

"This is quite a double whammy," said T. Sundaramanan, a health systems consultant in Pondicherry in southeast India. "This pandemic is a new spin on it."

He said the cylcone could have devastating consequences for India's fight against the pandemic, possibly causing it to spread to more remote communities.

"Our responses will be crippled. Our supply lines will be threatened. How will we move in relief supplies over land if all of it is in lockdown?" he said.

The cyclone made landfall between Digha, a seaside resort in West Bengal, and the Hatiya Islands in Bangladesh. The eye of the storm was likely to pass through the Sunderbans, one of the largest mangrove forests in the world, India's meteorological department said.

The forests could act as a vital line of defence by dissipating some of the energy from the waves that would otherwise crash into the coastline, said K.J. Ramesh, the department's former chief.

Areas at risk of landslides were stabilized with bamboo and concrete walls. But the combination of the virus and cyclone could lead to a "new humanitarian crisis", said Manuel Pereira, deputy chief of mission for the International Organization for Migration in Bangladesh.

"We know that if people are forced to seek communal shelter, they'll be unable to maintain physical distancing and run the risk of contracting or transmitting the virus," Pereira said.

Masks and hand sanitizers were hastily added to emergency items in the shelters.

Sobrato Das, a fisherman on Mousuni Island in India, close to the Sunderbans, described the shelters as crowded and said "very few people are wearing masks."

He said children were crying and women desperately tried to cover their faces with their saris while trying to maintain some distance from each other.

Some cyclone shelters in West Bengal were being used to quarantine virus patients and migrant workers returning to their homes. The state government asked for trains transporting migrants to be suspended, Chief Minister Mamata Banerjee said. Some schools were turned into shelters, news reports said.

Some in the cyclone's path saw a choice between the virus and the storm.

In the seaside resort of Digha, many people feared going to the shelters, fisherman Debasis Shyamal said. "They have been home for weeks, and are afraid of going into a crowd where they could get infected."

The densely populated city of Kolkata, which has nearly 1,500 coronavirus cases, was likely to see flooding, while some centuries-old buildings in the northern half of the city could collapse due to the strong winds, officials warned.

The cyclone is bearing down during the Islamic holy month of Ramadan, and some Bangladeshis who fasted during the day reportedly waited until the early morning hours Wednesday before heading for the shelters.

The region is no stranger to devastating cyclones. Ramesh, the former chief of India's weather agency, said it wasn't the frequency of cyclones but their intensity that has increased due to changing climate patterns.

He said this was caused by the temperature of the sea's surface. Warm ocean water is where storms get their energy, and the amount of heat trapped in the top 700 meters (2,300 feet) of the seas has increased. "As a result, cyclones are intensifying faster than before," he said.

Tropical Storm Arthur spins out to sea, will drench Bermuda