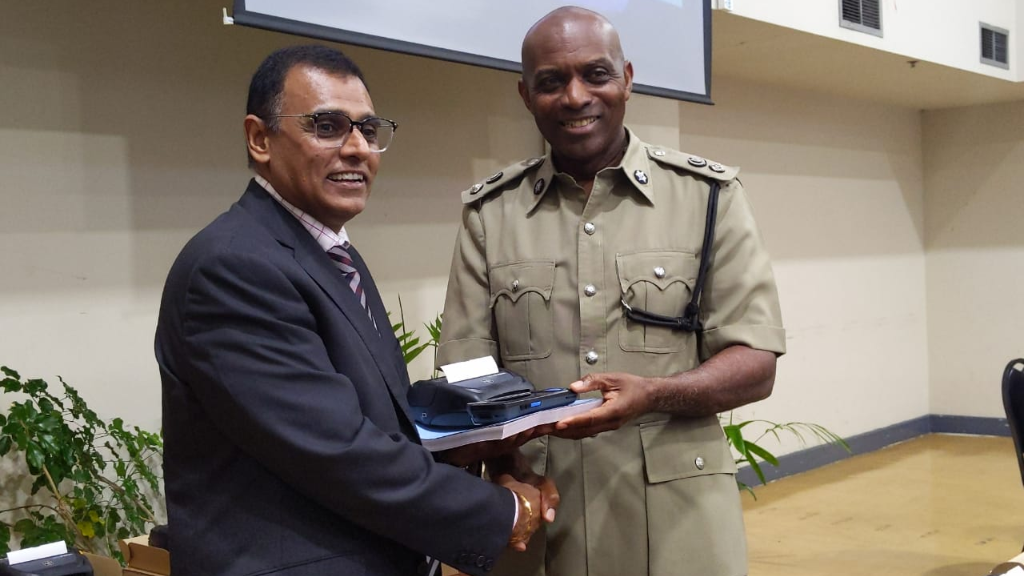 Minister of Works and Transport, Rohan Sinanan (left) hands over one of the new ticketing devices to DCP Jayson Forde.

The Ministry of Works and Transport’s new U Turn System has officially gone live, but for now the Ministry, police officers and traffic wardens are focusing on informing the public about what they stand to lose if they break traffic laws.

The Ministry held a handing over ceremony for the wardens and police officers at their office today. They received the new Handheld Mobile Traffic Ticketing devices and the Carbonless Fixed Penalty Ticket Books.

Line Minister Rohan Sinanan says he’s proud of the progress he’s been able to make during his tenure.

“This journey started almost 20 years ago. Over the last four years, I think a quantum leap would have been taken by the management and staff of the Ministry of Works and Transport,” he said.

He also praised the various arms of the Trinidad and Tobago Police Service, the Transport Commission and the Licensing Divisions for their involvement. Licensing, he says, specifically stands to benefit from the upgrades.

As he handed out the 300 devices, Sinanan explained that the exercise isn’t one based on making money for the state, but to encourage the traveling public to practice better road safety habits.

The full system, which will include the Red-Light Camera System and the Demerit Points System is expected to be functional from April 2.