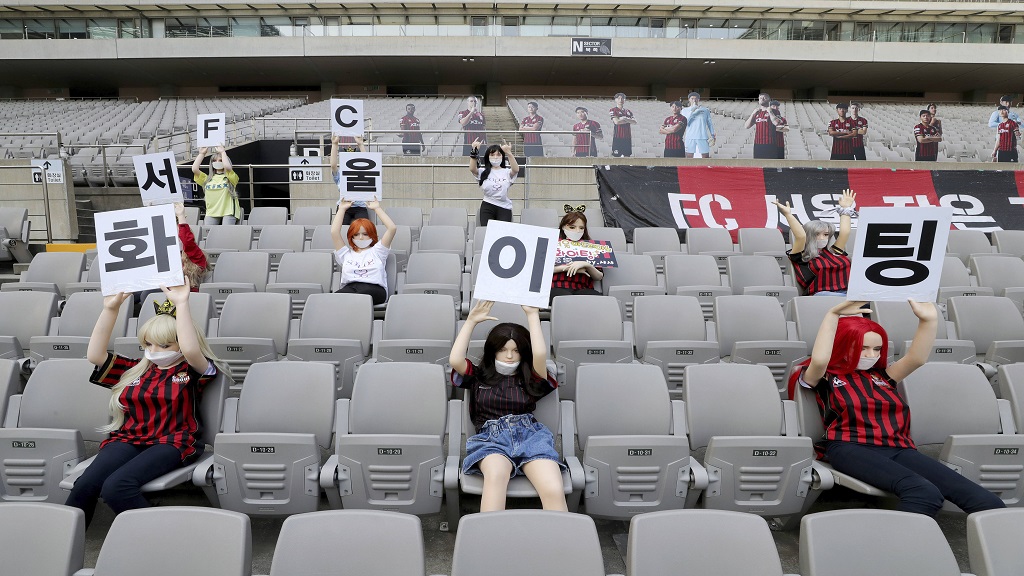 In this May 17, 2020 photo, Cheering mannequins are installed at the empty spectators' seats before the start of football match between FC Seoul and Gwangju FC at the Seoul World Cup Stadium in Seoul, South Korea. (Ryu Young-suk/Yonhap via AP).

A South Korean football club is facing penalties, including expulsion from its own stadium, for putting sex dolls in empty seats during a match last weekend.

The K-League is one of the few football leagues operating during the coronavirus pandemic, with games being played in empty stadiums.

FC Seoul’s attempts to increase the atmosphere at Seoul World Cup Stadium backfired despite their 1-0 win over Gwangju on Sunday. The club expressed its “sincere remorse” as public backlash intensified, but said it was assured by a supplier that it was using mannequins — not sex dolls — to mimic a home crowd.

About 25 mannequins were supplied by a local company and dressed in FC Seoul colours and wearing masks. The Yonhap news agency reported that fans posted suspicions about the life-size dolls on social media during the match and one banner showed the names of an adult toy manufacturer and of models who had inspired those dolls.

Such advertising is in breach of the competition's rules, and K-League officials have referred the matter to a disciplinary committee.

If found guilty, FC Seoul could be fined about $4,000 or have points deducted. The club could also be punished for damaging the prestige of the league at a time when it had been basking in unprecedented international attention.

On May 8, the K-League became the first major football league to start playing after the coronavirus pandemic shuttered sports around the world. The opening game attracted 19 million viewers worldwide.

There could be worse to follow for FC Seoul, the 2016 league champion. According to reports, Seoul Facilities Corporation, which operates the stadium, is investigating a potential breach. As part of its lease agreement, the club is required to obtain permission in advance for advertising. By not doing so, it could be expelled from the stadium where it has been based since 2004.

FC Seoul issued another apology on Wednesday as the case continued to dominate sports news. Yonhap said the club had asked the police to investigate.

“We apologise deeply to all those concerned about the unfortunate situation that occurred,” the club said. “We will review our internal procedures to ensure this does not happen again.”