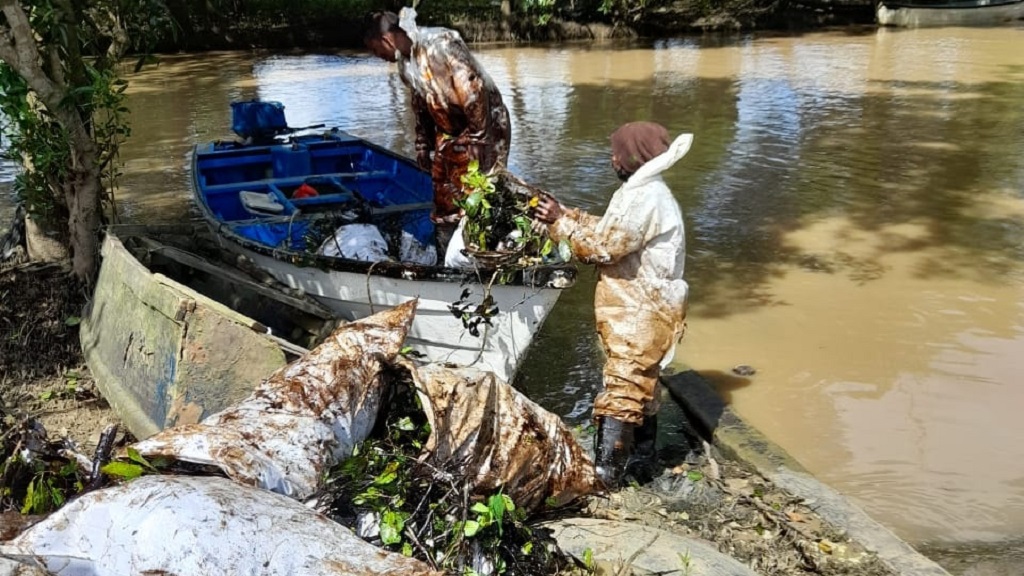 Fishermen are concerned about damage to their boats and engines as clean-up activities continue following an oil leak at New Cut Channel in the South Oropouche River, Woodland.

Edward Moodie, head of the South Oropouche Riverine Flood Action Group, said the equipment of approximately 14 fishermen have been affected.

Moodie said crews were seen digging into the river bank and expressed concern that the bank would not be repaired properly.

‘If this bank is not repaired properly this could cause damage to the community,’ Moodie said.

He said he visited the site today but workers appeared afraid to speak with him.

In a statement yesterday, Heritage Petroleum said the leak had been located and a crew of specialists were on-site. The company asked the public to stay away from the area for safety purposes.

Moodie said the fishermen are awaiting a response from the company on compensation for their damaged equipment.

He added that he is not certain of the environmental fallout but said there is a risk of birds and other animals consuming contaminated fish.

He added that upon visiting the site, he saw reporters allegedly being turned away for safety reasons.

'They trying to block the media, but if we had not done what we did no one would have known there was an oil spill in the river,’ Moodie said.

‘The Environmental Management Authority (EMA) is currently monitoring the response plan underway in the aftermath of the oil spill in Woodland.

‘The EMA’s Emergency Response and Investigating Unit (ERI) has been on-site and has participated in site visits along with the relevant response teams from the Ministry of Energy and Energy Industries (MEEI) and the Institute of Marine Affairs (IMA).

‘Arising out of the site visits, Heritage Petroleum has initiated its spill contingency plan based on resources at risk, including the sensitive mangrove ecosystem. Booms have been deployed at several locations along the South Oropouche River, Godineau River and St. John River to contain the spill and prevent potential flow to the sea. Heritage Petroleum has advised that fishermen and the local community are also assisting in the clean-up.

‘The EMA continues to monitor the contingency plan deployed by Heritage Petroleum and will continue to coordinate with all relevant agencies and stakeholders currently investigating this spill incident.’