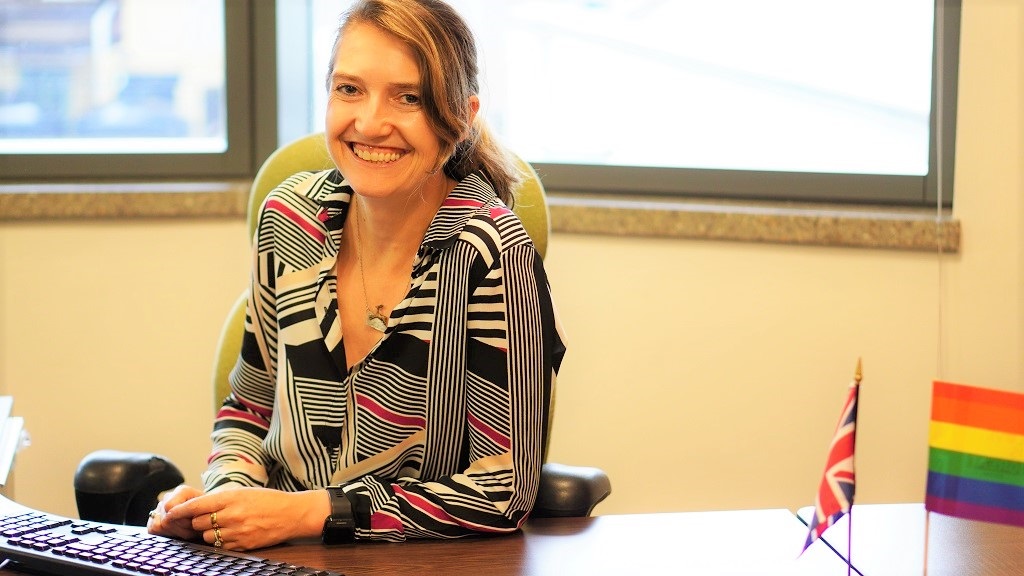 Although her arrival in Trinidad and Tobago was unique compared to that of other British High Commissioners before her, she has already hit the ground running.

In an interview with Loop News, new British High Commissioner to Trinidad and Tobago, Harriet Cross, said she has a range of plans for strengthening country relations as well as projects which can aid the country’s post-COVID-19 recovery plan.

Cross, who charmed Trinidadians with her lively and engaging Twitter presence while undergoing her two-week quarantine, chatted about a host of projects and plans in the works, focusing on highlighting several important issues.

Cross said gender-based violence and furthering opportunities for women in the workplace are definitely some of those areas of interest, continuing the work begun by former high commissioner Tim Stew:

‘That’s absolutely something we want to continue. The UK has a background in combatting domestic violence from a policing perspective but also from a social perspective, including how we can support survivors to get out of those situations they’re in, and I think there’s advice that we can share on that.’

‘But we’re also looking at it from a COVID-19 perspective and what this means for those populations. And then thirdly it’s about economic prosperity.’

‘Women have got an incredible amount to give in the workplace and if they’re not able to fully participate in the workplace, as a result of domestic violence, then that’s a real problem, so it’s part of the economic prosperity picture as well.’

Cross said there is an interest in helping to create more educational opportunities for girls and women.

In fact, the UK will be co-hosting a global education summit with Kenya next summer, and Cross said it’s hoped that Trinidad and Tobago will take part in the event.

‘It’s about educational attainment and working out how you can best support children in challenging circumstances, whether it’s girls or boys who are not given the best opportunities. Sometimes it’s stereotyping which can prevent some boys from attaining what girls achieve, so there are a lot of different angles.’

She said she also has a keen interest in women in leadership and strengthening those connections.

‘It’s exciting to meet with other women in leadership positions to find out not only how they got to where they are but what they did to help other women climb up the ladder as well. There are some great women in government and women ministers, so that’s quite exciting to get to meet them as well.’

Cross also supports the benefit of flexible working conditions during the pandemic which can allow parents to balance the demands of childcare and working life.

‘COVID-19 has reinforced our flexible working policies. I’m a big believer in work-life balance for everyone; if men and women in the workplace have vibrant lives outside of the workplace, they’ll be better employees. If they have the time to fit their passions around their work then they’ll be more willing to contribute.’

Cross added that she is also committed to furthering discussions on equality and rights for the LGBT+ community and continuing projects which can address issues in that area.

The race to reduce carbon emissions

An avid nature enthusiast, Cross said she was struck by the range of exotic animals and wealth of diversity she has seen since arriving in Trinidad and Tobago.

She said that while developmental needs vary for each country, there are ways in which to succeed in achieving both goals.

‘The UK is encouraging countries to be ambitious with their Nationally Determined Contributions (NDCs) as part of their developmental goals, so that’s what we’ll be asking T&T to do, to be as ambitious as possible in terms of how they can bring their carbon emissions down.’

She noted Trinidad and Tobago’s carbon emissions per capita and how the UK has managed the initial transition over to clean energy:

‘I think every country has a responsibility to develop and allow people to have better lives and that’s where clean energy comes into it. If we can shift, and sometimes it’s difficult because there are some job losses in some sectors, for example with the coal industry in the UK, now there are loads of jobs in the offshore wind sector. And it’s not just the people working in those companies but also the supply chains.’

‘If you can shift to clean energy and provide jobs on top of that then it doesn’t have to be one or the other.’

She said the UK has also focused on conserving nature as one of its ambitions for the 2021 United Nations Climate Change Conference, also known as COP26.

‘I’m really interested to see where Trinidad and Tobago will go in terms of solar energy. I think there’s increasing political will to do that, and we’re keen to share our experience, and as hosts of COP26, provide encouragement as well.’

She said the Caribbean Renewable Energy Forum happening later this month will also be able to provide greater insight on these issues.

Trinidad and Tobago has embarked on a major solar power project as outlined by Finance Minister Colm Imbert in the 2021 budget, which he said would be the largest in the Caribbean, once completed.

Another frontline issue for Trinidad and Tobago is that of food security, something Cross has expressed an interest in as well, having already visited the Ortinola Estate as well as a Moruga Hill Rice estate.

‘We’re in the process of working with the Ministry of Agriculture to scope potential projects on food production. It’s part of that aspect of building back better from COVID-19. Absolutely, that’s something we’re discussing right now, it’s definitely a priority.’

She also noted the work of small cocoa farmers who are working to produce the fine cocoa for which the country is known.

‘I think digitisaton of that sector is also important. Some of the small businesses I’ve spoken to do struggle, it goes back to the Ease of Doing Business; I know the government is working on digitising the process and I think that will really help.’

Cross mentioned that with the UK’s exit from the European Union, there may be opportunities for Trinidad and Tobago to market some of its award-winning products.

‘Now that we’re no longer part of the EU we’ll be looking at creating more trade relationships with the rest of the world. People are increasingly looking for unusual products, and I think that’s definitely a USP (unique selling point) of T&T. There’s a lot that people don’t know about Trinitario chocolate and people love hearing the story and history behind it.’

Cross said the eco-tourism potential which Trinidad and Tobago possesses has not gone unnoticed and encouraging the resurgence of the tourism industry, post-COVID-19, is also something they are looking at.

‘What I would love to see, post-COVID-19, is to look at ways in which the tourism industry, particularly in Tobago, can come back even stronger, and that can be done partly by supporting the airlines. As a High Commissioner it’s about promoting the UK in that country but it’s also about promoting the country you’re in to those back home, and that’s something I’ll be excited to do with T&T. I’m looking forward to sharing that excitement I have in a way that has results.’

‘I think more people in the UK can get to know the country, we can definitely build those relationships. For example for Black History Month in the UK, you realise how many important ties there are between our two countries. A lot of these figures in black British history have links to Trinidad and Tobago.’

‘I think that’s definitely something we can better strengthen to show how deep our relationship is, not just our colonial past but the value that Trinbagonians have added to life in the UK over the past 60 years.’

Although she has arrived in Trinidad and Tobago under particularly challenging circumstances, Cross was both encouraging and practical in her tips to focus on the positive aspects of the pandemic.

In fact, she said she’s been impressed with the way most Trinidadians have adhered to the public health regulations:

‘I’m really impressed with the way T&T is handling the COVID-19 crisis. [Most] people are really good at following the rules. I mean people haven’t really been going onto the beaches, there will be a few who break the rules but the majority who are wearing masks and not having large gatherings, is, I think, really impressive.’

'I think in terms of tips you have to focus on the silver linings, whether that means you spend more time with family because you spend less time out with friends, or maybe you’re spending less money as you’re not out as often.’

‘But I think it’s important to keep looking to the future, as there will be an end to this. One thing we’re working on a partnership with T&T on, and other countries, is finding a global vaccine. T&T is part of that COVAX approach to making sure there are enough vaccines and that countries in need get them.'

‘So there will be a day when we will be able to get back onto the beaches and safely be out together, and that’s something we have to hold onto. It’s not going to be forever.’

She said in some ways, the ways in which the pandemic has forced countries to place more emphasis on technology has even helped in some areas.

‘Some of the changes we will want to hold onto. For example during the pandemic we’re more able to have online conversations and Zoom chats; people are more careful to think about mental health. They’re checking in on people more than they might have done before.’

Although Carnival 2021 is currently not on the cards, Cross said she is eager to take part when the festival is once more allowed.

‘I’m someone who loves getting dressed up, the costume side of Carnival is so exciting. I love that theatrical element of Carnival so I’m definitely looking forward to that, and seeing Trinis on the streets, regular life in T&T.’

‘I guess that’s the silver lining; things we used to take for granted are now the special things, going to the beach or hanging out with friends. It makes us appreciate it more now.’