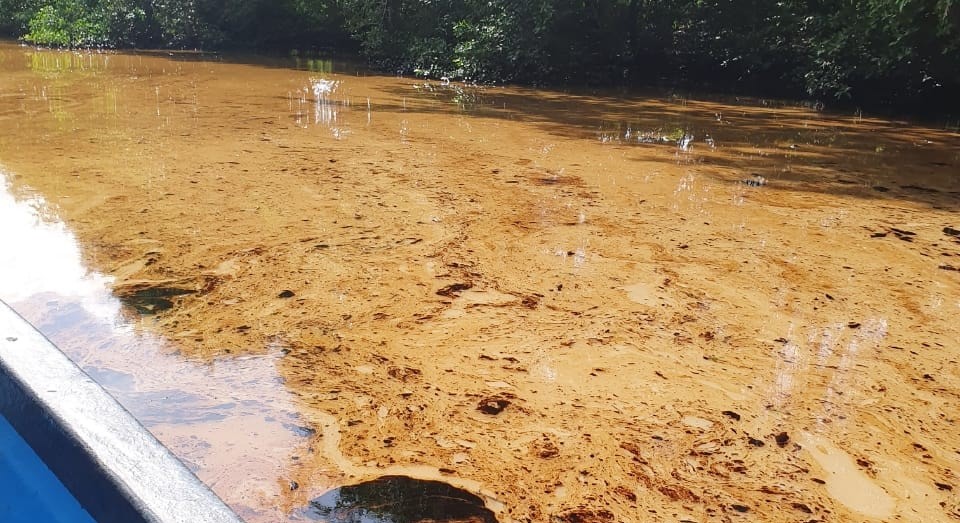 Oil layers over the Oropouche River after a spill this morning.

Heritage Petroleum is advising members of the public who utilise the Godineau River (also known as the South Oropouche River) from La Fortune Pluck Road to the river’s mouth at Mosquito Creek to exercise caution within the area until further notice.

The company says this is to facilitate swift and safe clean-up activities, currently underway at the river, in response to an oil spill.

"The pipeline was isolated, and booms have been deployed along the Godineau River to restrict further spread downstream," the statement said.

Additionally, Heritage Petroleum says it is mobilising all available resources, including the services of specialised oil-spill response contractors, to clean up the affected area.

A wildlife rescue, conservation and rehabilitation team has also been engaged.

The Company is therefore appealing to the public to avoid the area as best as possible.

"Failure to so do may jeopardise the clean-up activities in addition to putting persons at risk."

Meanwhile, Heritage Petroleum says the relevant authorities have been alerted and further notifications will be issued when clean-up activities have been completed.

Heritage Petroleum is responding to an oil spill which occurred in Woodland earlier today.

The company says that after receiving a report about a spill near New Cut Channel in Woodland, they dispatched a team who quickly found the source of the leak - a 16-inch Trunk Pipeline - and is in the process of clamping it.

Heritage also promised that work will be done to clean up all affected areas. A wildlife rescue, conservation and rehabilitation team has also been engaged.

Booms are also being dispatched along the Godineau River to keep the oil from spreading any further. The company is conducting ongoing surveillance to ensure the totality of the spill is contained.

MP for Oropouche West, Davendra Tancoo, raised concerns about the spill in a media release today.

He said he emailed the Environmental Management Authority (EMA) and the Office of Disaster Preparedness and Management (ODPM) on the issue.

Haynes questions gov’t: “Are we running out of oil?”