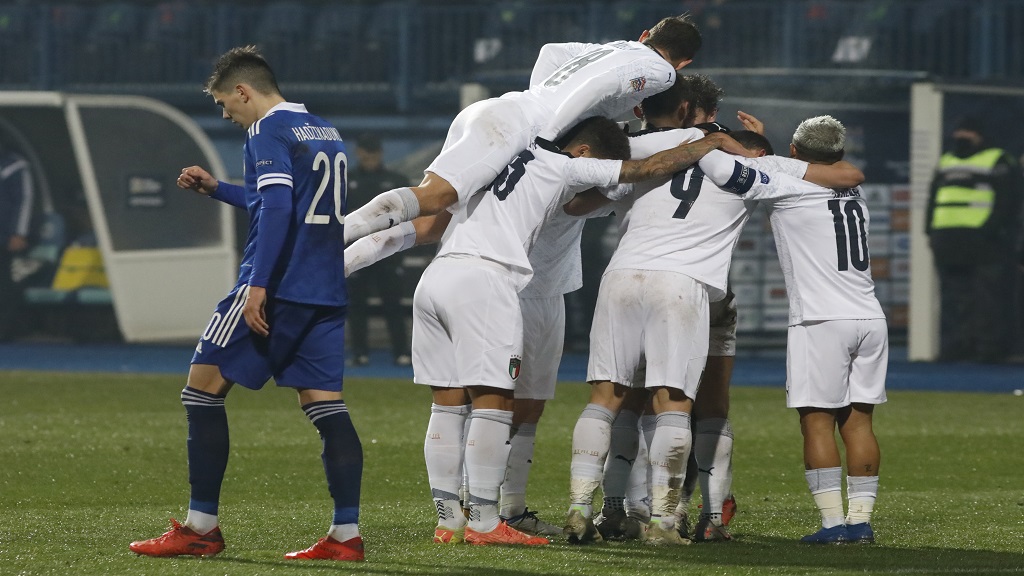 Italy earned the right to host a star-filled Nations League finals that will feature the current No. 1-ranked team and three of the past four World Cup champions.

Italy’s 2-0 win at Bosnia-Herzegovina on Wednesday sealed the top spot in Group 1 above the Netherlands, which beat Poland 2-1. That group winner had been pre-selected to host the Final Four next October.

Top-ranked Belgium also booked their place in that knockout bracket, lifted by Romelu Lukaku's 56th and 57th international goals in a 4-2 win over Denmark.

Belgium and Italy join Spain and France, who topped groups that finished Tuesday. That means the tournament will feature the winners of the World Cup in 2006, 2010, and 2018.

A total of 18 Nations League games were played Wednesday to complete a difficult 2020 program for Europe’s 55 national teams amid a spike in the coronavirus pandemic.

A swath of players and team staff tested positive for COVID-19 during this international break, including Italy coach Roberto Mancini who was absent in Sarajevo.

“I think the lads have given a great gift to Mancini," assistant coach Alberico Evani said. “We look forward to facing the best teams in Europe in the finals.”

The games also resolved promotion and relegation issues in the four-tier Nations League.

Andrea Belotti and Domenico Berardi scored for Italy midway through each half in a win that relegated last-place Bosnia from the top tier.

Had Italy slipped up, the Netherlands or Poland could have taken the top spot with a win. The Dutch sealed a 2-1 win with late goals from Memphis Depay and Georginio Wijnaldum.

Belgium could have lost top spot in Group 2 to Denmark but eased into a 3-1 second-half lead when Lukaku struck with trademark powerful finishes. Belgium gave up a freakish own goal when Thibault Courtois let a pass slide under his foot, but Kevin de Bruyne immediately restored the two-goal margin.

England’s 4-0 win over Iceland made it 10 straight losses for the visitors across two editions of the Nations League and relegation to the second tier.

Hungary, Wales, and the Czech Republic earned promotions to the top tier by finishing top of their League B groups.

Russia’s 5-0 loss at Serbia opened the door for Hungary to rise in the Group 3 standings with a 2-0 home win over Turkey.

A 2-0 win over neighbouring Slovakia lifted the Czechs above Scotland, which lost 1-0 at Israel. It was Scotland's second 1-0 defeat on the road since qualifying for the European Championship last week.

Wales protected their lead in Group 4 by beating second-place Finland 3-1. Ireland drew 0-0 with Bulgaria, which joined Turkey and Slovakia in being relegated to the third tier.

The group winners also earned a little insurance in the World Cup qualification program which starts next year. Two places in a 12-nation qualifying playoff will go to winners of Nations League groups.

The first Nations League game cancelled because of COVID-19 cases was forfeited as a 3-0 loss for Norway in a UEFA ruling Wednesday.

UEFA’s appeals committee decided the Norwegian football federation was to blame for not sending a team to Romania for a game scheduled Sunday. Norwegian public health officials ordered the players to quarantine and not fly to Bucharest after one player tested positive.

Norway gave up an equaliser deep into stoppage time in a 1-1 draw that gave Austria first place in Group 1. The UEFA ruling relegated Northern Ireland before they drew 1-1 with Romania.

Albania and Armenia secured promotion to second-tier League B in must-win games over teams that topped their respective groups at kickoff.

Albania beat Belarus 3-2 and Armenia won 1-0 against North Macedonia, which had qualified for Euro 2020 last week.

Armenia’s home game was played in neutral Cyprus because of a UEFA ruling during the recent conflict with neighbouring Azerbaijan that neither should host international games for security reasons.