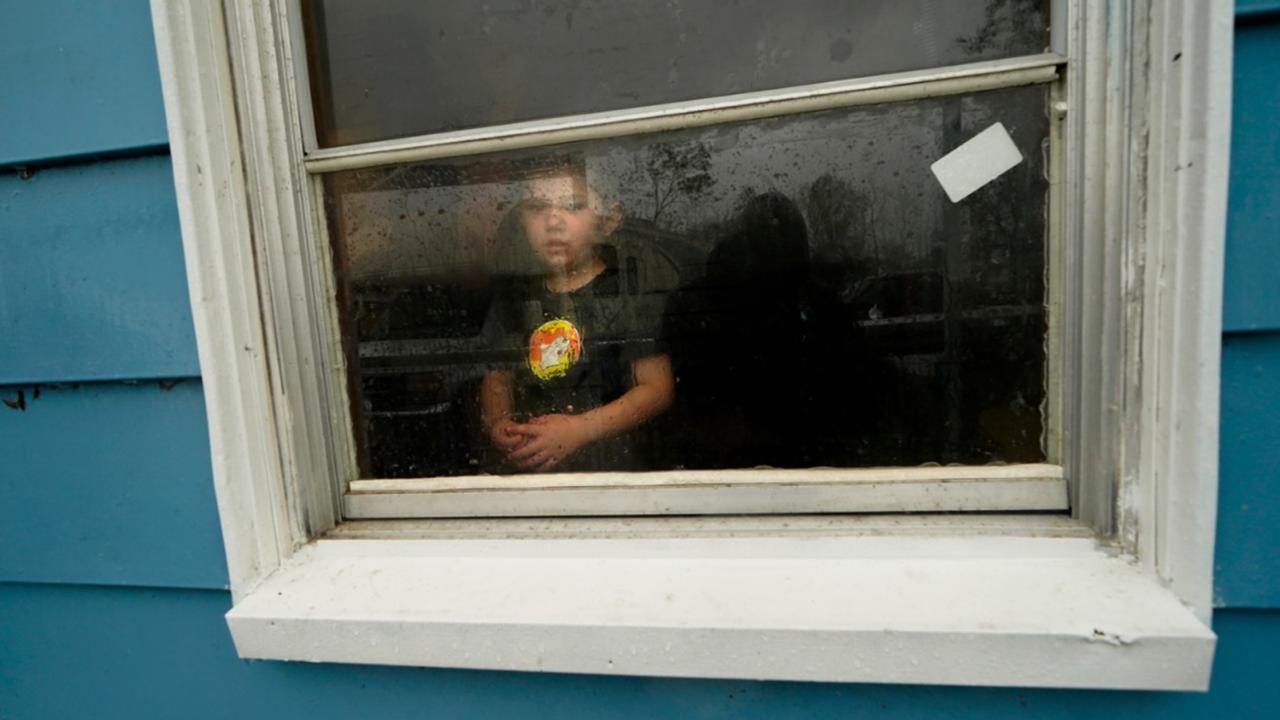 Hunter Fontenot, 3, looks out the window of his uncle's house, to which his family temporarily relocated to ride out Hurricane Delta which is expected to make landfall later in the day, in Lake Charles, La., Friday, October 9, 2020. (AP Photo/Gerald Herbert)

The centre of the hurricane made landfall about 6 p.m. near the town of Creole with top winds of 100 mph (155 kph), pushing a storm surge that could reach up to 11 feet (3.4 meters), the National Hurricane Center said.

As the 10th named storm to strike the continental U.S. this year, Delta's arrival snapped a century-old record.

People in south Louisiana steeled themselves as Delta delivered driving rain, powerful winds and rising water to a part of the state still recovering from a deadly catastrophic hurricane six weeks ago. Power outages in Louisiana and neighbouring Texas soared past 203,000 homes and businesses Friday shortly after the storm came ashore, according to the tracking website PowerOutage.us.

In the city of Lake Charles, about 30 miles (50 kilometres) inland from where Delta made landfall, rain pelted the tarp-covered roofs of buildings that Hurricane Laura battered when it barreled through in late August and killed at least 27 people in the state.

“It’s devastating and it’s emotional for the citizenry,” Mayor Nic Hunter said as he prepared to ride out the storm in downtown Lake Charles.

Winds picked up Friday evening in inland areas such as Lafayette, where occasionally strong gusts buffeted trees and sheets of rain were falling.

Many parishes and towns implemented curfews Friday until Saturday morning to encourage people to stay off the roads during the worst of the storm.

Dawn Trosclair checked into a hotel Friday, worried about trees falling on her home in Lafayette.

“No other storm really threatened us," Trosclair said as she watched the gusting winds. "Laura was far enough away and the winds were going to be mild enough here where we didn’t leave.”

Laura damaged about 95% of the homes and buildings in Lake Charles, while up to 8,000 residents — 10% of the population — remain displaced, the mayor said. Piles of mouldy mattresses, sawed-up trees and other leftover debris lined the city's largely vacant streets Friday, arousing concern they could cause more damage and deaths when the new storm strikes.

“We just got lights back on like two weeks ago and then evacuating again? It’s extremely hard,” said Roslyn Kennedy. She was among a handful of evacuees at the Burton Coliseum in Lake Charles, waiting to be transported, again, to safer destinations.

As the fourth hurricane or tropical storm to hit Louisiana in a year, Delta also tied a 2002 record, Klotzbach said.

Earlier Friday, it had sustained winds of 115 mph (185 kph), putting it at Category 3 strength. Though the storm weakened as it approached land, officials cautioned that it remained dangerous.

"The fact that it’s weakening should not cause anyone to lose focus or lose vigilance, because this is still a very strong storm,” Gov. John Bel Edwards said during a news conference.

Some residents were staying put, despite the danger. Ernest Jack remained in his Lake Charles house, one of those with a blue-tarped roof. He had gathered food, plenty of water and had covered his windows to protect against flying debris during Delta.

“I just didn’t want to leave. I stayed during Hurricane Laura, too. I just put it in the Lord’s hands,” Jack said, pointing skyward.

Delta, the latest in a recent flurry of rapidly intensifying Atlantic hurricanes that scientists largely blame on global warming, appeared destined to set records at landfall.

“You can always get another house, another car, but not another life,” said Hilton Stroder as he and his wife, Terry, boarded up their Abbeville home Thursday night with plans to head to their son's house further east.

New Orleans, to the east, was expected to escape Delta's worst. But tropical-storm-force winds were still likely in the city Friday, and local officials said they were preparing for the possibility of tornadoes.

In Mississippi, Governor Tate Reeves declared a state of emergency, as did his counterpart Edwards in Louisiana. Forecasters said southern Mississippi could see heavy rain and flash flooding.

The hurricane was expected to weaken rapidly over land. Forecasters predicted Delta would be downgraded to a tropical storm late Friday. The storm’s projected path showed it moving into northern Mississippi on Saturday and then into the Tennessee Valley as a tropical depression.