The US National Hurricane Centre in its 4pm update issued a summary of watches and warnings.

A Hurricane Warning is in effect for Providencia. Hurricane conditions are expected there by late Sunday night with tropical storm conditions expected beginning Sunday evening.

Hurricane conditions are possible within the Hurricane Warning area in Nicaragua and Honduras by late Monday with tropical storm conditions possible by Monday afternoon.

A Tropical Storm Warning and Hurricane Watch are in effect for San Andres. Tropical storm conditions are expected to begin on the island late Sunday or Sunday night with hurricane conditions possible Sunday night or early Monday.

A Tropical Storm Watch is in effect for the northern coast of Honduras from west of Punta Patuca to Punta Castilla. Tropical storm conditions possible by Monday afternoon.

The NHC says interests elsewhere in Nicaragua and Honduras should monitor the progress of Iota.

At 4pm EST, the centre of Tropical Storm Iota was located over the central Caribbean Sea about 375 miles (600 km) south of Kingston, Jamaica, and about 480 miles (770 km) east-southeast of Cabo Gracias A Dios on the Nicaragua / Honduras border.

Iota is moving toward the west-southwest near 7 mph (11 km/h). A westward motion with some increase in forward speed is expected to begin very soon and continue through Monday night.

Data from an Air Force Reserve Hurricane Hunter aircraft indicate that the maximum sustained winds have increased to near 60 mph (95 km/h) with higher gusts. Tropical-storm-force winds extend outward up to 105 miles (165 km) from the center.

Steady to rapid strengthening is expected during the next day or two, and Iota is forecast to be at or near major hurricane strength when it approaches Central America. 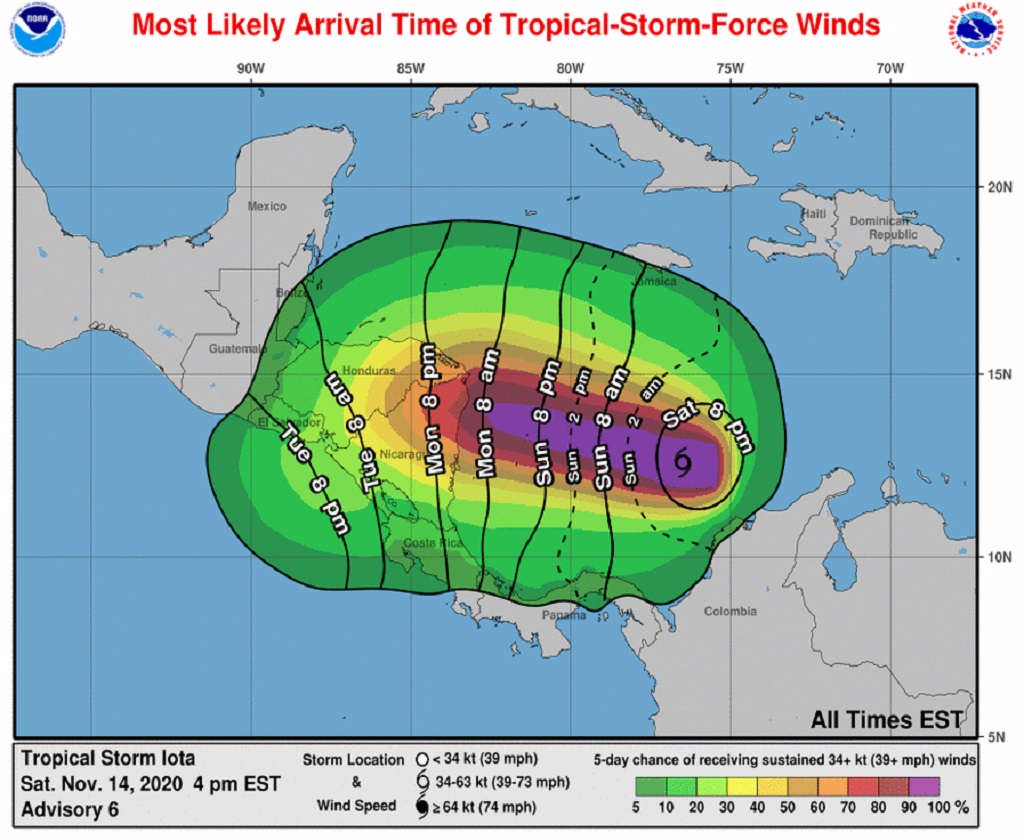 Rainfall: Iota is expected to produce the following rainfall accumulations through Thursday:

Costa Rica, Panama, and northern Colombia: four to eight inches (100 to 200 mm), with isolated maximum totals of 12 inches (300 mm). This rainfall would lead to significant, life-threatening flash flooding and river flooding, along with mudslides in areas of higher terrain.

SURF: Swells generated by Iota will affect portions of the coast of Colombia, and the southern coasts of Hispaniola and Jamaica during the next day or two. Swells will begin to reach the coasts of Nicaragua and Honduras on Monday. These swells are likely to cause life-threatening surf and rip current conditions.

At least 3 dead, thousands without power as Eta lashes Nicaragua