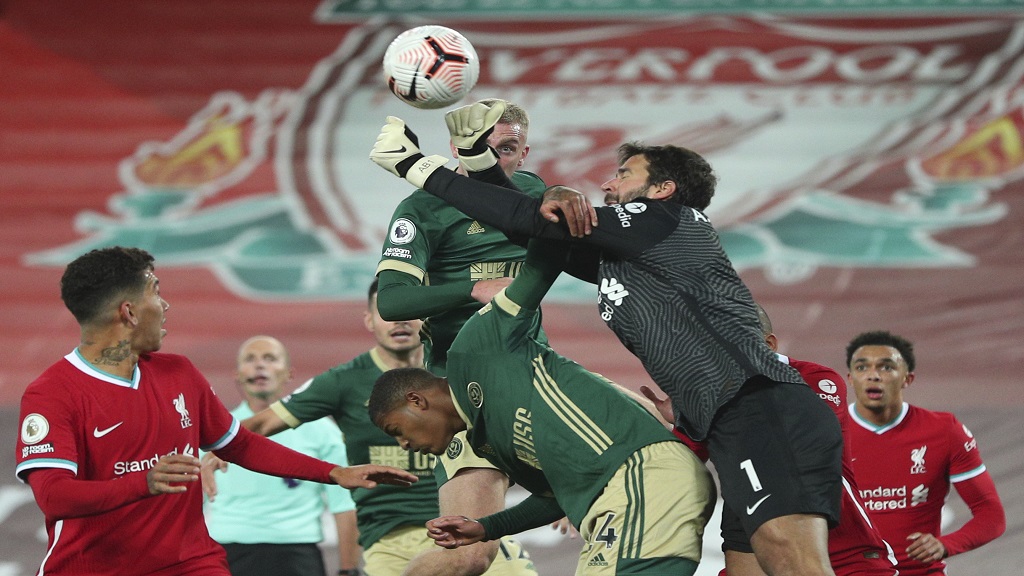 But just a week after Liverpool wrote to the Premier League for an explanation of two contentious referrals in the Merseyside derby, the video assistant referee — this time Andre Marriner — found himself in the spotlight again.

He upgraded Fabinho’s tackle on Oli McBurnie from a free-kick to a penalty despite the Brazilian appearing to win the ball right on the edge of the area, and Sander Berge put Sheffield United ahead from the spot in the 13th minute.

Liverpool escaped further penalty appeals before Roberto Firmino equalised in the 41st after Sadio Mane’s header was only palmed away by goalkeeper Aaron Ramsdale.

Midway through the second half, the VAR ruled out, correctly, a brilliant individual effort from Mohamed Salah, who juggled Trent Alexander-Arnold’s overhead pass before slotting past Ramsdale.

However, the reprieve for the visitors was brief as Jota rose to head home Mane’s cross in the 64th for his second goal in four league matches for his new club.

Liverpool extended their unbeaten home league run to 62 matches, one short of equalling the club record from 1978 to 1981, to go second in the standings.

It was one of their most hard-fought of 51 victories in that sequence with United not only working hard to hold their early advantage but creating enough opportunities to concern Jürgen Klopp’s side, which had the added security of Alisson Becker back in goal ahead of schedule following a shoulder injury.

Rumour Has It: Mbappe interested in Liverpool move, Madrid back Zidane