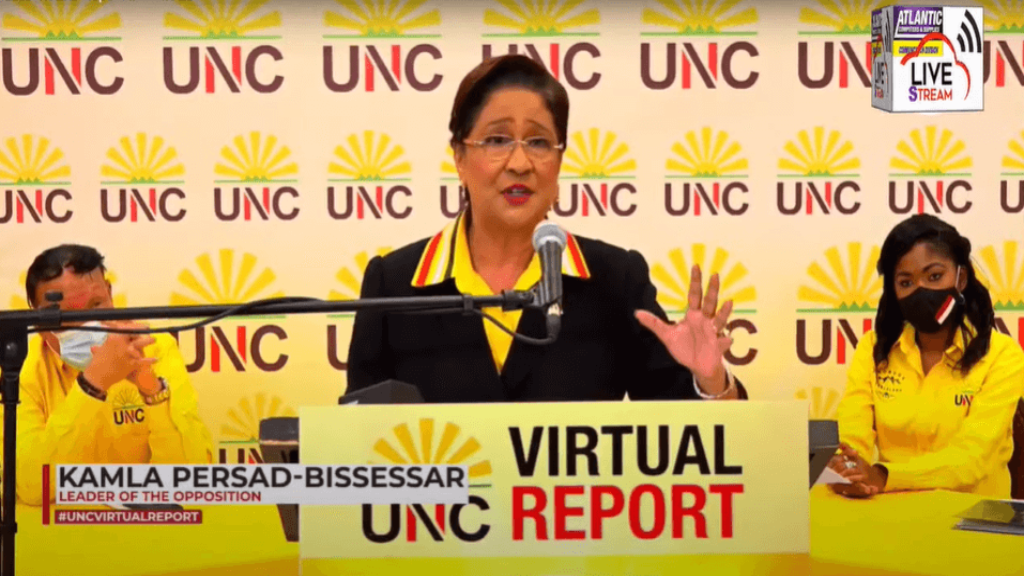 Speaking at the UNC’s Virtual Report on Monday evening, leader Kamla Persad-Bissessar made reference to the closure of the Pointe-a-Pierre refinery, calling it “the greatest tragedy” in the country’s history.

On the developments regarding the acquisition of the refinery by Patriotic Energies and Technologies Company Limited, a company owned by the Oilfields Workers Trade Union, Persad-Bissessar accused Government of deception.

The UNC leader said Government’s announcement of the sale to Patriotic, the only local bidder, was only an election gimmick noting that Patriotic’s proposal was rejected.

“Imagine you get a bid, a complicated document, I would imagine… and you take less than 48 hours to come and say ‘no way’... No to Patriotic, no to OWTU.

And, now, Mr (Ancel) Roget, I wonder whose mannequin he will be traipsing up and down Trinidad and Tobago with? At least my mannequin was a very good-looking one.”

Persad-Bissessar said the country’s oil and gas industry has been reduced to lesser value than scrap iron under the Dr Keith Rowley led-administration.

“They have turned our industrial sector into a scrap belt. It’s happening down here at what we know as Petrotrin. It’s happening in Central where all those plants have closed down… there’s a loss for the first time in NGC’s history of over 40 years… they say it’s because of COVID.”

The UNC leader placed the blame for the $316 million loss squarely at the feet of Prime Minister Dr Keith Rowley, noting that he negotiated gas prices when he met with energy leaders in Houston.

She said T&T’s energy sector is limping to recover and has lost its competitive edge with the closure of 10 plants at the Point Lisas Industrial Estate.