Kamla: Opposition to be 'formidable force' inside, outside Parliament 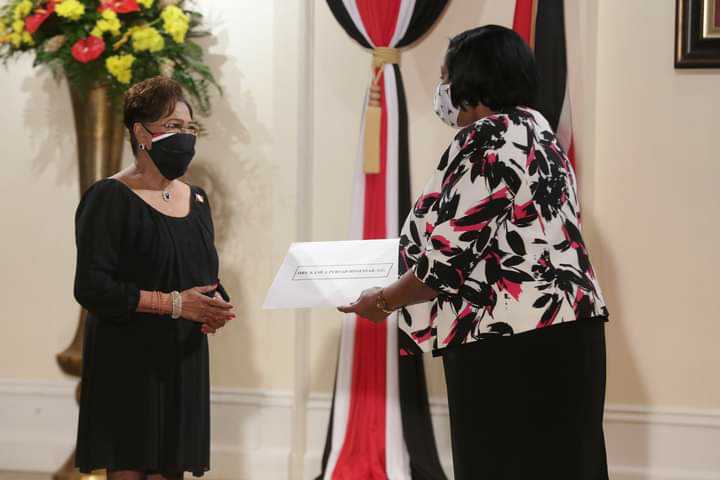 Pictured: Opposition leader Kamla Persad-Bissessar accepts her instruments of appointment. Photo via Facebook, The Office of the President of Trinidad and Tobago.

The work of the Opposition is not yet complete.

So said Kamla Persad-Bissessar as she was reappointed Opposition Leader on Tuesday afternoon.

Persad-Bissessar rededicated the party’s efforts on the Parliamentary bench, as she declared that it will work to ensure the best welfare of citizens and hold the government accountable.

She said: “We will continue to be a formidable force inside and outside of the Parliament but my party my colleagues and I will no longer be used as an excuse for the government’s poor performance.

We will not be painted as obstructionist but we will work in the best interests of all the people of T&T.”

Speaking after the ceremony, Persad-Bissessar expressed pride in the “young crop” of Parliamentarians whom she believes will bring fresh ideas and different perspectives to the table, particularly where COVID-19 is concerned.

She said their “innovation” will help steer the country through this “dark time”.

Persad-Bissessar said the Opposition continues to have concerns over the state of the economy, job losses and crime which she said have worsened in some areas as the country continues to grapple with rising COVID-19 cases.

In terms of the Opposition’s Parliamentary agenda, she said all is on hold until Friday, when the 12th Parliament commences.

Government will introduce legislation to enforce the wearing of masks in public on which Opposition, in principle, has no objection.

She said Senators are still be considered, but consensus was reached on who would serve as Opposition Chief Whip – Pointe-a-Pierre MP David Lee.

All Opposition members will take the oath of office during that sitting.