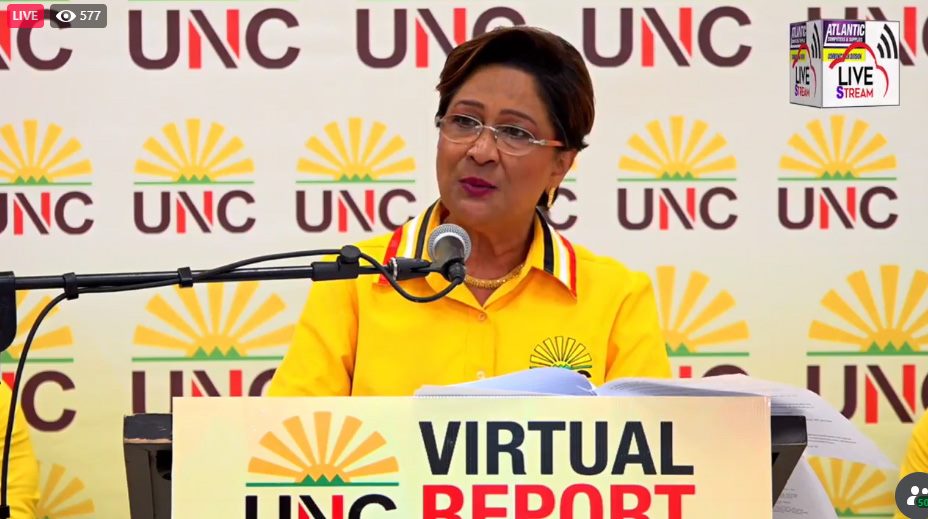 The Oilfields Workers' Trade Union’s (OWTU) Patriotic Energies submitted a bid for $200 million less than their initial promise to the government in the deal for the Petrotrin Refinery.

The information was revealed last night by Political Leader of the United National Congress (UNC) Kamla Persad Bissessar during the party’s virtual report.

She later said that the total figure was USD$526 million in total, but that Patriotic was prepared to pay USD$500 million and wanted the government to pay USD$26 million in fees on their behalf.

“In addition to dropping the price, they wanted the government to pay them $26 million, this is far less from their USD$700 million offer,” she added.

Another USD$500 million would have been required in order to fully restart operations at the refinery, bringing the cost to a grand total of USD$1 billion.

The UNC Leader also claimed that Patriotic approached the Royal Bank of Canada (RBC) to help with financing USD$500 million while another firm, Trafigura was set to finance the other half of the bill.

More than that, Patriotic also proposed that they’d be exempt from paying taxes as part of their deal with Trafigura.

“Trafigura has indicated that they will require exemptions and concessions from taxes, duties, levies; inclusive of taxes in income from Trinidad and Tobago.

“So, if the government cannot collect taxes from the refinery or Paria, what is the benefit to the people of Trinidad and Tobago?” she questioned.

Currently, through Paria’s operations, the company has contributed over $100 million in taxes.

Persad Bissessar said Patriotic’s 2020 bid was ‘dropped in her mailbox’. It was supposedly addressed to Minister of National Security, Stuart Young and Minister of Energy and Energy Industries, Franklin Khan.

After closing the refinery in 2018, the government said that Patriotic would have first preference to acquire the assets providing that they had a competitive bid.

After narrowly meeting the government’s October 31 deadline, Minister Khan returned two days later to say that Patriotic’s bid was denied and that the doors were now open for other, possibly international bidders.