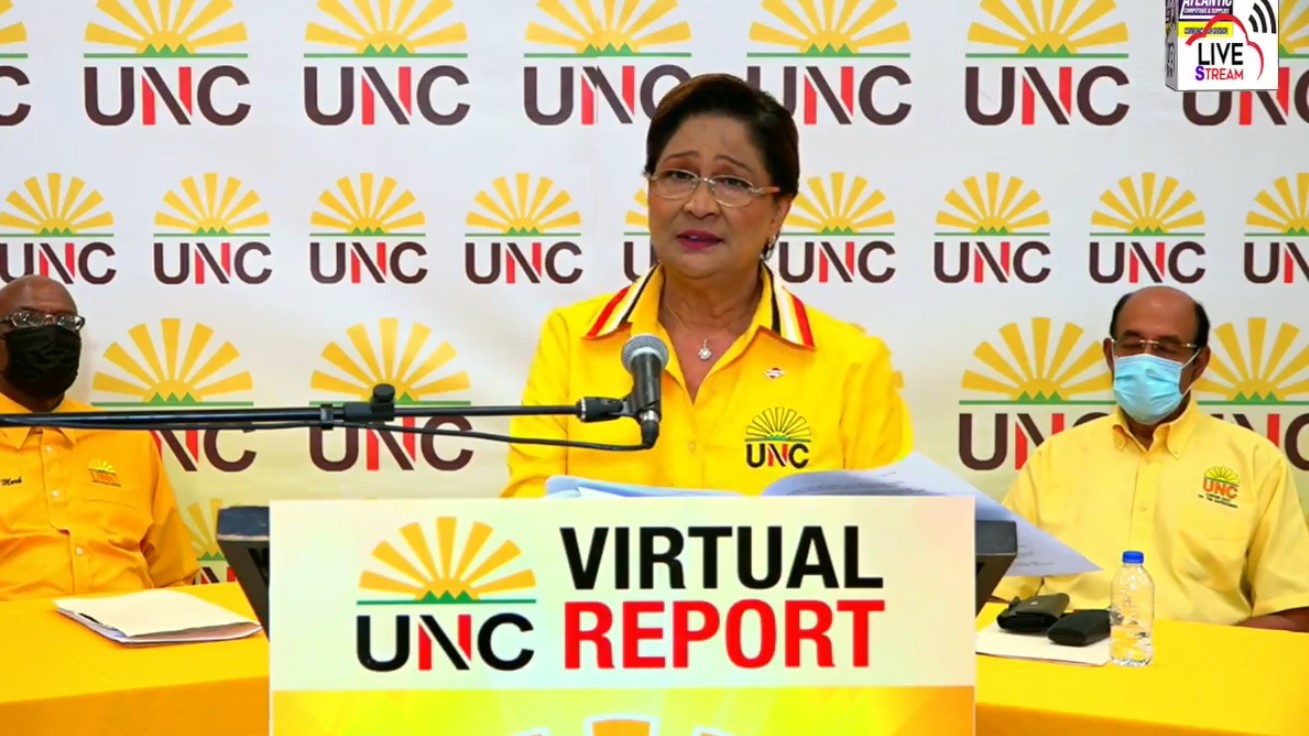 Opposition and Political Leader of the UNC, Kamla Persad Bissessar.

Political Leader of the United National Congress (UNC), Kamla Persad Bissessar, has revealed her slate of candidates for the party’s internal election.

Last night in a virtual meeting, Persad Bissessar announced that in addition to her retaining the post of Political Leader, she’s also hoping that the UNC membership votes in Davendra Tancoo as Chairman, Khadijah Ameen as Vice Chairman and Dr Lackram Bodoe, Jearlean John and David Lee as Deputy Political Leaders.

Lee took the podium to vouch for his candidacy, but not without pointing out the hypocrisy he noticed from Persad Bissessar’s rivals.

“How can the opposition of the last parliament be weak when you had MP’s like Fazal Karim and Dr Bhoe Tewarie and Dr Fuad Khan? The same people who Mr (Vasant) Bharath complained about were removed. Even Ramona Ramdial who is contesting on his team was a member of the last opposition,” he said.

The team’s main rival is Vasant Bharath, a former Trade and Industry Minister within the party, who has made the argument that under Persad Bissessar’s leadership, the UNC has lost consecutive elections. David Lee’s rebuttal is that Bharath himself hasn’t always been the most successful.

“While his team touts how much elections our leader has lost, he won’t tell you that he himself seldom won elections. I want to remind the country and our people, in 2015, Mr Bharath lost St Joseph, in 2010, he lost the Chairmanship of the UNC by a margin of eight to one. In 2007, he barely held on to the St Augustine seat with the lowest margin of victory ever in this party’s history,” he claimed.

Taking the stage for the feature address, Persad Bissessar echoed Lee’s sentiments. Without saying his name, she also took aim at Bharath’s behaviour and comments he made in the political sphere. She added that he also seems to enjoy playing both sides of the fence.

“If we end up in opposition they jump back to cursing and denigrating the UNC for the next five years aided and loved by PNM elements and some anti-UNC mainstream media and commentators. They are celebrated by PNM operatives and anti-UNC commentators for attacking the UNC party which they craftily sell as putting country first and being patriotic. Sounds familiar?” she mused.

Bharath offered his service on the government’s economic recovery team after COVID-19 had grave effects on the public purse.

Vasant pledges to include more young people in UNC politics